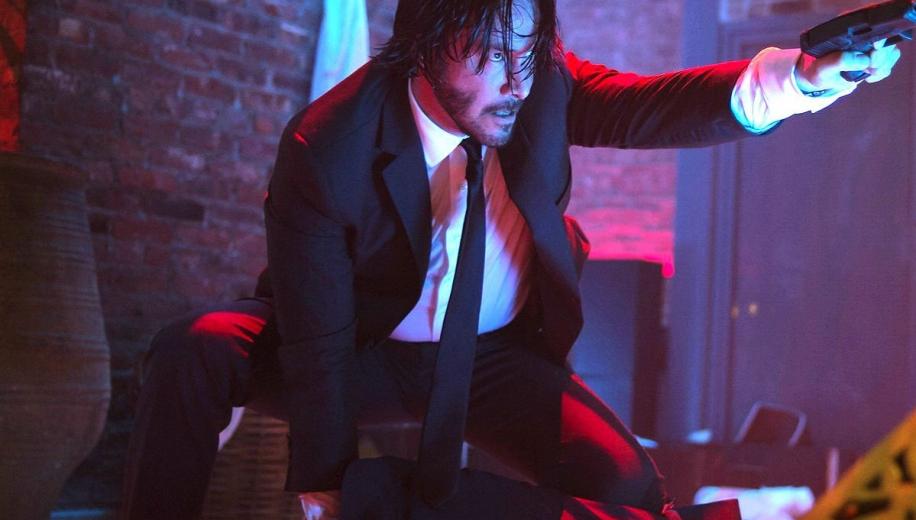 World building with slick comic-book-style assuredness, hitting us with MMA-style ferocity, and returning us to the golden era of heroic bloodshed gun-fu ballets, John Wick is a near-perfect actioner.

One of the biggest sleeper surprises in recent times, this relatively low budget indie flick literally came out of nowhere, and totally blindsided audiences across the globe, making far more money than anybody ever expected it to and winning the critics over with its lean, efficient, no-nonsense editing and pacing, it’s aforementioned worldbuilding, and for returning Keanu Reeves to form, with a bang. Like an impossible, mythical beast, debut directors Chad Stahelski and David Leitch – working from a 2012 Black List debut screenplay by Derek Kolstad – have fashioned something people never even knew could exist. John Wick is a film which joyously revels in the milestones of the action genre, all the while becoming a new and defining entry itself.
It's a film which pays tribute to all those countless classics that have gone before, and yet manages to refine the melting pot of genre staples into something that feels surprisingly fresh. Fusing comic book style with spaghetti western; hard-boiled revenge noir with the works of the director of Hard Boiled, in the oh-so-tired action genre few things are as deliriously engaging or unabashedly brutal. And boy is it good to see Reeves back, over 15 years after the masterpiece that was the first Matrix film, proving that – even at 50 – he’s still got it. If there’s anything you’re left wanting for at the end of the furious 100 minute runtime, it’s more from Reeves, more from these directors, and more from John Wick. And thankfully Chapter 2 has delivered precisely that. Now, this is the title that many UHD adopters have been waiting for. Shot digitally (admittedly partly at only 2.8K), it is one of those increasingly rare films that was privy to a full 4K digital intermediate, leaving it room to shine on the format in all its glory. Although full 4K titles do not always equate to clear upgrades in terms of detail and clarity, John Wick certainly does, with a tangible uptick in resolution that leaves close ups even more impressive, and backgrounds peppered with finer nuances that are now more clearly visible. The high points come in any of the darker sequences and, considering the movie is mostly shot at night or in shadow-bathed settings, this is a real advantage, clearly distinguishing the 2160p look from its 1080p counterpart.

Of course the true - and very literal - highlights come in the presentation's use of the High Dynamic Range (HDR) and Wide Colour Gamut (WCG) that Ultra HD Blu-rays really use to stand apart from their HD siblings, going way beyond mere pixel resolution, and determining the very look and vibrancy of the piece. John Wick is prime material for this, with its heavily stylised comic-book look that sees vibrant primaries, neons and strong, vivid hues of purple and red casting entire sequences in a stunning new light on this Ultra HD Blu-ray. The WCG affords noticeably richer, deeper tones, giving the nightclub sequences an all-new lease of life, whilst the broader range of peak whites and solid blacks affords the darker sequences yet more intimate discrete distinction.

Sure to be one of the go-to demo titles for UHD fans across the board, this is a superb reference title for the format. Cas Harlow reviewed the Dolby TrueHD soundtrack on a 5.1-channel setup – John Wick also boasts an explosive Dolby Atmos track running off an excellent Dolby TrueHD 7.1 core. Although fans who already have the Blu-ray will have been down this road before, there's no denying that the soundtrack is every bit as impressive as the video. It's powerful, and precise - much like its protagonist - punching through its targets with outstanding use of the surrounds and all the weight that the LFE channel can bring to bear. Dialogue - arguably the least important element - is still given keen prioritisation across the frontal array, to remain clear and coherent throughout.

The soundtrack is tense and electric, a stomping score that both provides several distinct John Wick themes, and further brings the key action setpieces to life with electric electronic energy and LFE-infused beats. Effects distinguish between the various different weapons, from the thundering handguns that prove Wick's weapon of choice, to the car-stopping shotgun and the myriad assault rifles. Incendiary grenades ignite, whilst various sniper rifles deliver precision shots with devastating impact. The surrounds are in full force here, handling the munitions well, delivering the bullets and shells with power and precision, and tearing up your living room with a superior sound design that impresses even before considering the enhancement of Atmos.


Another reference audio presentation to match the reference video

Steve Withers reviewed the audio using a 7.1.4-channel Dolby Atmos setup - In much the same way as the film itself is a masterclass in action choreography, this Dolby Atmos soundtrack is a shining example of what a more immersive sound design can achieve. All the fantastic audio attributes mentioned by Cas above with regards to the 5.1-channel experience are equally as applicable in Atmos but with a whole new level added. Almost as soon as the film starts a helicopter flies directly overhead and then there's a rain soaked funeral with raindrops falling down from above you. Once the action kicks off the the entire sound field springs to life with gunshots echoing around the room and zinging past your head. The object-based approach to the sound mix means that effects are steered around in three dimensional space, whether that's in front, to the side, at the rear or above you laoreet.

In terms of ambience the addition of overhead channels gives environments a far more realistic presence and sounds often come from where they are in the film. So for example, in the shoot-out in the nightclub the music is coming from the speakers above, just as they are in the actual environment. In another scene two characters are talking underneath an elevated railway and you can hear the trains rumbling along overhead. However despite the complex nature of the sound design itself, dialogue always remains clear and focused to the action on screen. The bass is equally effective, integrating into the rest of the mix perfectly and underpinning every gunshot, punch or car crash, giving the action the visceral impact that it needs. The Dolby Atmos soundtrack on the Blu-ray release of John Wick is a reference performance that compliments and enhances your enjoyment of the film itself - absolutely stunning. Lionsgate's habit of bucking the trend to leave the UHD Blu-ray discs bare bones proves useful for UK viewers once again. If you didn't already know, UHD is not governed by 'regions' and so discs across the world are capable of being viewed across the world. However, and this is a pretty big caveat, the accompanying Blu-ray discs are often locked much the same way as the standalone BDs would be. In the case of this US release of John Wick, that means that the accompanying BD is Region A-locked, which would have left Region B-locked UK viewers who wanted to watch the extras on said BD out in the cold (as is the case with many UHD releases), but for the fact that Lionsgate have thankfully, once again, ported all of the extras across to the UHD. As a result, Region B-locked fans can breathe a sigh of relief, and relegate the BD to its proper use as a coaster.

The extras, whilst not extensive, still cover the key bases, headlined by a strong Audio Commentary from the Co-Directors, who talk about Reeves' commitment both to the character and the action sequences, the choreography of the latter, the comic-book worldbuilding and key locations used to bring life to the piece, and the way in which they made a limited budget work for them through dedication and a clear vision. The accompanying Featurettes offer a deeper look at Reeves; at the directors; at the stunt crew; at the story and World-Building; the locations; and the key nightclub action sequence.

A perfect actioner, even if those less inclined towards pure action fare won't quite get what all the fuss is about, but for those of us who jump aboard this freight train, when the credits roll the unrelenting experience only leaves you wanting more. More from this world, and more from the characters that populate it. And, ultimately, more from Reeves’ greatest 21st Century incarnation... John. Wick. And if the success of this year's sequel is anything to go by, the John Wick franchise is on the rise.


The John Wick franchise is on the rise

As many fans only expected, John Wick's arrival on UHD Blu-ray is something to celebrate. The stunning use of HDR and WCG, off the foundation of a rare 4K DI, coupled with the colourful native style of the piece, leaves this a top tier Ultra HD Blu-ray release in terms of video presentation, and, with the accompanying Atmos track, just as impressive on the aural front. A nice selection of extras (kindly ported over to the UHD too) rounds off an excellent, near-perfect package that demands to be in every action fan's collection, and will likely remain one of the go-to demo/reference discs for the new format for quite some time to come (or, at least, until the sequel is released in a couple of months).