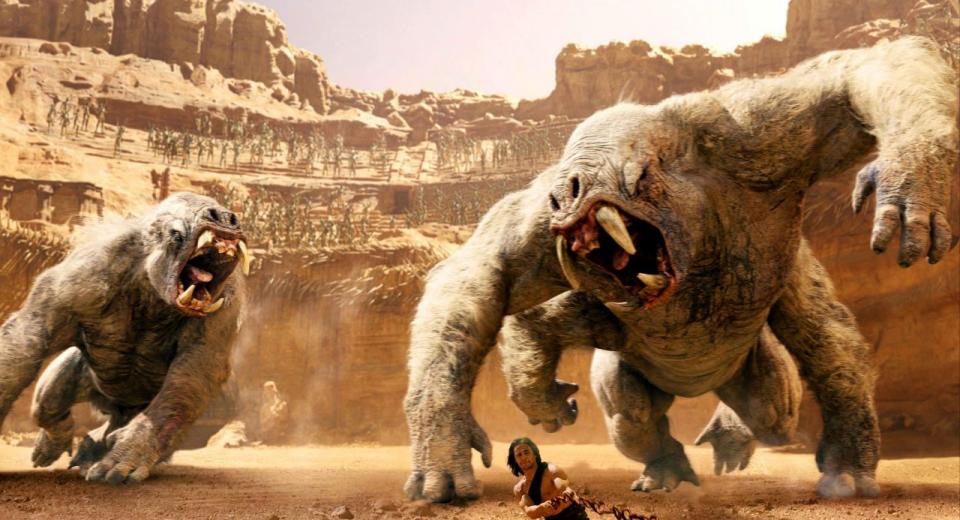 These comments all relate to the 2 disc 3D UK multi-region release. The disc is presented in 2.4:1 with the 3D added after completion of the film. This is not the preferred method, with many films now being made in “native” 3D. Digital is also preferred to 35mm film for 3D conversion and unfortunately the chosen format was traditional film. This would suggest that the idea of releasing this movie in 3D was a late decision. 3D currently leads to a drop in quality on most domestic playback systems, with active systems the panel is driven to higher brightness levels to overcome the losses in the active glasses while in passive TVs you lose vertical resolution. In this respect, the original picture needs to be spot on to try and compensate for the final presentation shortcomings. Brightness and contrast in particular can be an issue and this film does suffer. The “New York” shots on the rainy railway station look very flat, as do the shots around the mansion. There is very little 3D depth and blacks becoming gloomy with limited low level detail. The main problem is the depth of field. As noted in the main review, 3D needs a shallower depth of field to create the illusion of depth. Shoot for 2D and it may not work in 3D. The CGI’d Bassom sections look much better, with greater depth, less depth of field issues and much more vibrancy. It is not the best in class – Avatar buries it for realism, with much more roundness to objects. Electronic conversion uses Rotoscooping – a technique whereby different layers are a cut out and set at different distances. This is never as successful as true 3D shooting and is now considered an outdated technique. By no means a reference 3D movie, although the transfer is good without very much in the way of visible artefacts to spoil the picture. Without going over the DTS-HD HR versus MA debate, this soundtrack had to be compressed in order to fit it onto the disc along with the 3D picture. A shame then, that the accompanying 2D release was given the same format. Without the MA track to compare to, my comments are purely subjective. I found the dialogue to be lost in the main track at times, with too much reverberation making some key lines difficult to discern. The music score is good if not instantly forgettable with none of the strong recurring themes that make for a great soundtrack. The battle sequences are loud, but lack the dynamics of some of the best out there and more use of the surround channels would have helped. It all feels a little lazy, with plenty of missed opportunities to pick up on fast moving action and adding moving effects to go along with them. It will give your sub a good work out with more energy below 30hz than I have ever come across before. It becomes a bit wearing at times, with little respite throughout the film. Lots of effort has gone into these, but are only on the 2D disc. This is common practice, so no big deal. Skip over the bloopers reel – it’s just lots of people fluffing the odd word and falling over a bit, so pretty standard stuff. “100 years in the Making” gives us some useful information on the author – Edgar Rice-Burroughs plus the most drawn out film making process in history. The deleted scenes show just what a behemoth this film had become and just how much editing was required. Some of the scenes might well have helped the film, but it’s hard to argue with the editors – at least according to director Andrew Stanton! Watch this section with the commentary switched on.

The jewel in the crown is the “360 Degrees of John Carter” – a 40 minute look at a day on set. From the cooks to the director, pretty much everyone gets their minute of fame, although you do come away with the probably entirely correct impression that the film unit revolves around catering! A shame that co-star Taylor Kitsch was not filming that day, but Lyn Collins allows us into her 7 hour hair and makeup regime!

A well-produced and valued set of extras.

A financial and critical flop, this movie does not translate much better to the small screen. If you really love sci-fi action movies and comic book action heroes, this might just be the film for you. For me, it did not excite or enthral me. Without doubt the CGI is first class and the live action frenetic, but the lack of direction and a muddled storyline spoiled it for me. Director Andrew Stanton makes the point that much of the back story was to set up sequels. A shame, as I cannot see these ever being made.

Technically flawed in 3D this is no reference disc. The sound is also a little disappointing but is not poor by any respects. The transfer is generally excellent and the extras well worth watching as well. I would not however shell out the additional money for a 3D copy and stick to the conventional 2D presentation on this occasion.