Not merely just a Christmas film, but also a musical to boot. 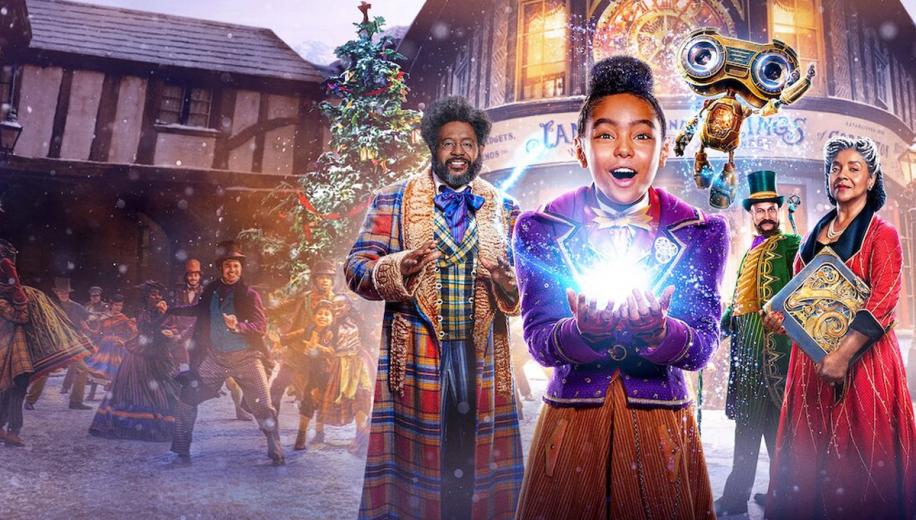 Like it or not, it’s pretty much the most wonderful time of the year. Even though there’s lockdowns and a pandemic and worldwide upheaval. Christmas does not care about your melancholy (and neither does capitalism). Not keen on all this Christmas spirit and seasonal magic stuff? You should probably steer clear of Jingle Jangle: A Christmas Journey then, which is not merely just a Christmas film, but also a musical to boot.

The film is bookended by a Christmas story Phylicia Rashad is reading to her grandchildren. It’s about genius toymaker Jeronicus Jangle (at first played by Justin Cornwell), who is swindled out of his life’s work by his apprentice Gustafson (initially Miles Barrow) and a talking toy, Don Juan Diego (voiced by Ricky Martin).

Things don’t exactly buck up for Jeronicus either. His loses his beloved wife Joanne (Sharon Rose), and he’s soon estranged from his daughter Jessica (Anika Noni Rose). As he ages, Jeronicus is played by Forest Whitaker, while dastardly Gustafson (by now played by Keegan-Michael Key) becomes rich and famous off the back of his former mentor’s work.

But, this is a Christmas flick, so things do start to turn around. The entrance of Jeronicus’ granddaughter Journey (Madelen Miles) slowly forces Jeronicus out of his decades-long funk and promises to start to make things right for the Jangle family.

It’s a nice change of pace to have a film about a white Christmas that’s a little… less white than usual.

The entire film is as colourful and sugary and whimsical as you’d expect of a Christmas Netflix film called Jingle Jangle. In short, it’s magic. Writer/director David E. Talbert keeps the gorgeous visuals coming from start to finish, from rich snowy scenes to the intricately designed steampunk toys Jeronicus creates. Everything from the costume design to the big swelling musical numbers are injected with Christmas cheer. The stop-motion animation is pristine, and with lively dance numbers by Kylie Minogue choreographer Ashley Wallen, it’s pretty much a non-stop joy ride.

That said, the first portion of the film does suffer a little bit from slow pacing. We probably could have moved away from the first act a bit quicker, and introduced Journey a lot sooner. Because Miles really is a delight as our heroine, with a great voice and the perfect face to soften even the Scroogiest heart.

The casting as a whole is wonderful – who knew Forest Whitaker had such a set of pipes on him? He’s excellent in his part of Jingle Jangle’s big power duet with Noni Rose (the film’s musical numbers are by Philip Lawrence, Davy Nathan and one John Legend, no less).

And, it’s a nice change of pace to have a film about a white Christmas that’s a little… less white than usual. There’s nothing half-hearted about this film. Talbert’s direction is bold, the costumes by Michael Wilkinson are spectacular, the hair styling by Sharon Martin is nothing short of magical. There are big full-chested musical numbers and a gorgeous Victorian-style set with Production Design by Gavin Bocquet.

The entire film is as colourful and sugary and whimsical as you’d expect of a Christmas Netflix film called Jingle Jangle. In short, it’s magic

The storyline might be a bit predictable (Christmas movies don’t need to invent the wheel after all – a sleigh doesn’t need them), but it’s so heartfelt and feel-good and about a million other synonyms for cheerful that it doesn’t matter. Everything in Jingle Jangle is so sparkly and happy that this feels like a Christmas movie that will last the ages. Its universal message of community and the joy of discovery marks it as a future classic. It’s definitely not going to win over the set-in-stone holiday haters, but its combination of music, dance and charm will prove a recipe for success with kids and adults alike this festive season.

In short, Netflix has sleighed the game with this one. Come for almost sickly sweet Christmas cheer, stay for a wonderful cast, catchy tunes and stunning visuals. It’s happening, get used to it – it’s Christmastime.