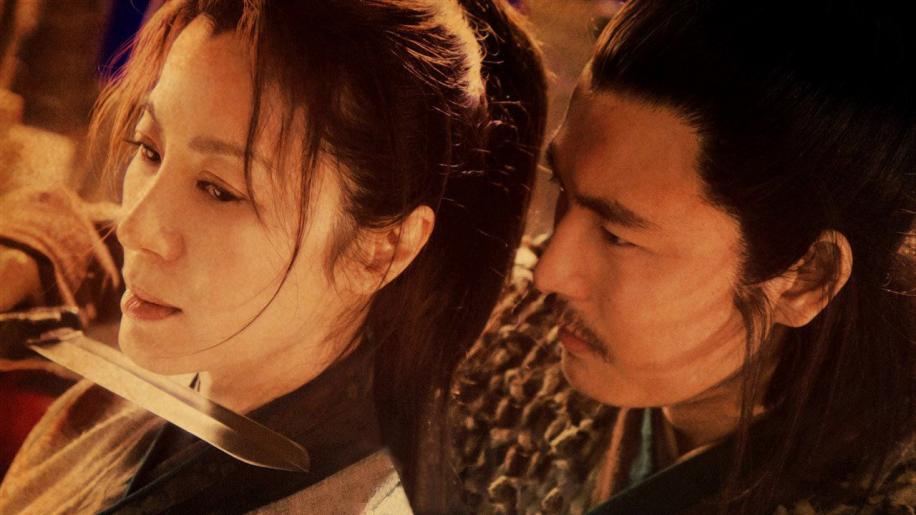 The name John Woo likely attracted many fans to this feature, but the master of the bullet-ballet, having recaptured his best form by going back to his native shores and looking at more historical fare with Red Cliff, is merely the producer/co-director of Reign of Assassins (Jianyu in its original tongue). Helming the project proper is Su Chao-pin, a relative newcomer with but two credits to his name, the provocatively titled screwball drama comedy Better Than Sex and the mystery suspense chiller Silk. Both showed promise and displayed some original ideas but with Chao-pin also being the writer of the material there is an argument to be made that talents were stretched and ultimately neither project was able to be held together with any great degree of coherence or polish. So, with a budding writer/director seemingly needing that little bit of a helping hand to achieve a true hit, who better to step in than John Woo to provide assistance.

Whereas Chao-pin’s two prior films showed some hints of innovation that simply couldn’t quite make it to the screen in a refined manner, Reign of Assassins is a step backwards, both in terms of time period and risks taken. Falling in line with many epic kung-fu tragedies such as Hero and House of Flying Daggers, not forgetting the critics’ favourite Crouching Tiger Hidden Dragon, the story takes its inspiration from the era, mixing a few half-facts with liberal wire-work and some excellent wu-shu. Set during the Ming Dynasty, there is a fairly text-heavy preamble that informs us of the existence of an ancient monk’s body that was divided into two upon his death. Legend tells that this monk, who had travelled from Indiato Chinasome 800 years previously, gained such mastery of the arts of kung-fu that those who acquire both halves of his cadaver and reunite them will be bestowed with similar unrivalled mastery. This is all told via some fancy faux-traditional drawings of the tale that finished with the omen that the Dark Stone, a secret guild of assassins, has entered the battle to capture the corpse and that half of the remains are in the hands of a Minister Zhang Haiduan.

Some flashy freeze frames introduce us to the nefarious group; Drizzle (I suppose it beats “peeing down”) a female swordsman, Lei Bin a skilled user of throwing needles, The Magician a showman type who utilises all manner of tricks (and wears a cape that even Joseph in his amazing technicolour dreamcoat would consider gaudy) and The Wheel King – the masked leader of the group. We also meet the minister’s son Zhang Renfeng but he buys it in quick fashion. These early fifteen minutes are a break-neck setting-up of the story proper. Drizzle absconds with the half-a-body they were all fighting over, kills Renfeng, meets a priest, starts on the path to spiritual enlightenment and dispatches half a dozen assassins sent by her former employers Dark Stone to part her head from her shoulders and retrieve the half human-shaped shrivelled prune she’s been toting around. The quick entry and glossing over of the character’s evolvement in these early scenes could be viewed with criticism, and such gripes would not be without substance, yet it is hard to hold a grudge against any film that can throw action sequences at you in such close succession and deliver a degree of drama to the situations rather than them appearing to be throwaway moments made to fill an action quota. The fast progression represents not a lack of polish but an attempt to structure proceedings in a slightly more roundabout fashion. More will become known in flashbacks and dialogue with different characters; it isn’t complex, but eschewing a totally linear string of events helps underpin the core themes – drama, tragedy, Buddhism and some damn fine action.

The drama is catered for as we follow our central character of Drizzle, who changes her appearance courtesy of some inventive ancient Chinese plastic surgery to become Michelle Yeoh (and aging considerably in the process but the less said of that the better). Turning her back on her wicked ways, she now seeks to live a quiet life and repent her past misdeeds. Perhaps not the most sympathetic character, as she manages to kill the first person to actually help her, it was thus a wise decision to give her a husband, Jiang Ah-Sheng (Played by Jung Woo-sung – The Good, The Bad, The Weird), an altogether affable figure who struggles to gain the attention of the former assassin, now known as Zeng Jing. For such a rapid gear change, from bloody action and Buddhist musings to a simple whimsical romance, it is handled extremely well. The air of Ah-Sheng as a happy go-lucky man with nothing but smiles and the best of intentions, clumsy in his approaches to appear nonchalant, make him a perfect counterbalance. Not only this, but when Jing’s former employers finally catch up to her, his presence heightens the tension as well as adding the requisite fight scene where one person performs kung-fu whilst manhandling the body of another who is not so adept, thus fighting for two.

Yeoh’s acting ability help paper over any cracks in the transformation of Drizzle into Zeng Jing and once Dark Stone is back on the scene, with a new female assassin played by Barbara Hsu (Future X-Cops), the momentum starts to build again. There are the usual tense stand-offs and pre-fight dialogue that dances around the houses – both of which add to the charm of any genre movie, but when the swords start clashing the choreography electrifies the atmosphere. Intricate close quarter fights manage to keep just enough frenetic camerawork, without resorting to constant whips and spins that disorientate the viewer and mask actors’ poor martial arts skills. Yeoh is, of course, perfectly adept in this regard, but even those for whom it is not their forte are shot in such a manner as to flatter their proficiency.

There may be a little too much talking in riddles for some (“Life isn’t necessarily happy. Death isn’t necessarily painful”), and the impact of the Buddhist monk’s teachings are perhaps too easily accepted as being capable of changing a hardened assassin’s heart, but the line of karmic destiny that runs through the film, and becomes far more apparent in the final third, helps cement these potentially fluffy additions as key to the plot. As each assassin gets a backstory the simple relationship of good versus evil gets blurred and the tragic element of the tale becomes prevalent. There is just enough simple kung-fu flick fodder in the first part of the film to whet your appetites and hold you – who can begrudge a fight that ends with the line “Do you think your kung-fu is good enough? Once you enter the martial arts world, there is no getting out. We will be waiting for you in hell”. Once the first fights raise your blood-pressure the pace is slowed, characters come to the fore and before you know it a possible throwaway action movie has metamorphosed into a decent drama. It is formulaic in many respects, but not wishing to give anything away, Chao-pin needed some balls to think up and write the catalyst that drives the assassin clan leader’s quest without allowing it to descend into farce.

Reign of Assassins pulls together all these strands of genre blueprints and ends up an excellent action movie that is held by tight choreography, a fluid pace, sound central performances and just enough faux-philosophising to keep it semi-cerebral. I haven’t enjoyed a swordplay flick as much since Tsui Hark’s The Blade and as a tragic drama of the human heart this can easily sit alongside House of Flying Daggers. It may not reinvent the wheel, but the duo of Jing and Ah-Sheng are brought to the screen in such a charismatic way by Michelle Yeoh and Jung Woo-sung that the story itself would stand up to scrutiny, even without the stellar whirlwind fights.