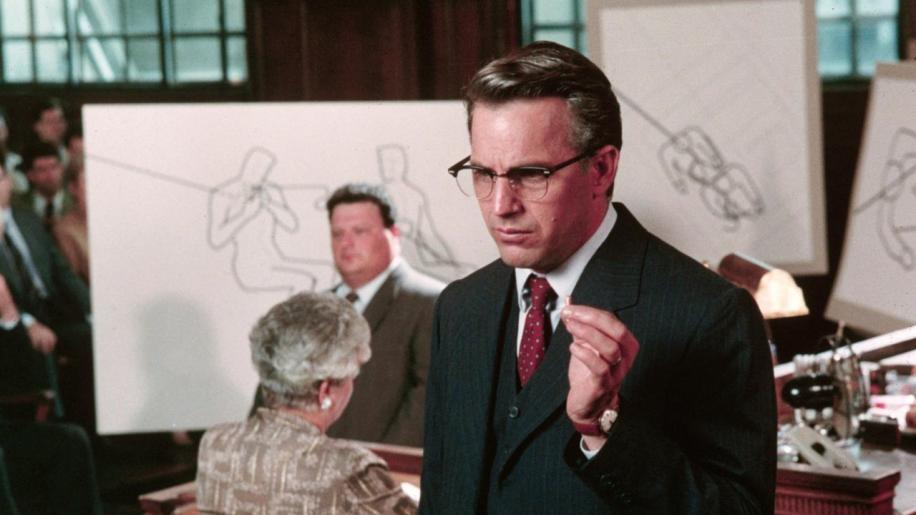 On the 22nd of November 1963 John Fitzgerald Kennedy was murdered by one Lee Harvey Oswald, this is of course known history; what else we know is that conspiracy theories since that time have grown up around this fateful event. Was it the mob, did JFK have links to the Mafia? Was it the Cubans because of the missile crises in 1962, or Cuban exiles who thought JFK should have provided further support for the failed Bay of Pigs escapade? Was it in fact the CIA/FBI/US Government who disagreed with JFK's progressive politics both internally with the civil rights movement or externally with his attitudes to other cultures, specifically the U.S.S.R?

This is ripe material for Oliver Stone who in 1991 took all of these conspiracies fleshed them out with testimonies and adaptations of two books, “On the Trail of the Assassins” by Jim Garrison and “Crossfire: The Plot That Killed Kennedy” by Kim Marrs. Stone has always been noted for his political ventures and in my own opinion, other than Platoon, this has to be his best outing on celluloid. This film more than any other has allowed Stone to take a swipe at his own Government, something which he is always analysing and criticising to some degree or another.

The film covers the investigation which Jim Garrison (Kevin Coster), district attorney of New Orleans, puts together some three years after the assassination of President Kennedy. He felt there were avenues which had not been thoroughly investigated. He reads the Warren Commission's twenty-six volumes and finds that too wanting, not having asked the pertinent questions to the people who were in and around Dealey Plaza on that eventful day. His investigations introduce him to a number of nefarious characters who might have had some associations with Lee Harvey Oswald and as he and his team dig deeper and uncover more facts it becomes apparent to Garrison that there is more here to this case than immediately meets the eye.

He finds his office bugged by the powers that be, he is given information from ex army emplyees who think JFK's desire to change American society may have had something to do with the case, stressing that it's not really who killed Kennedy which is the the question which should be asked; why being for more important. Eventually Garrison arrests Clay Shaw (Tommy Lee Jones) and tries to prove in court that he was not only a CIA operative but also an integral part in the conspiracy which eventually led to JFK's murder.

I have enjoyed JFK since its initial release some 17 years ago, I have always found Stone's political films something which both entertain and to some degree educate allowing the viewer to take the initial concepts which Stone puts up on screen and then flesh them out by their own research. This I was more than happy to do with Salvador and Nixon but as I'm always one to be taken in by conspiracy theories I already knew most of what Stone was attempting to put up on screen here. He takes all the main conspiracy theories and amalgamates them in to this almost four hour epic; there's no doubt that he, and of course Garrison before him, does prove that a conspiracy must have occurred (and this is recognised by a second commission set up in the late Seventies) but he leaves it up to the viewer to determine if this conspiracy was instigated by the powers that be or other organisations.

This can seem unfocused at times, but at the end once you have sat through almost four hours it all comes together in the final court room scenes where Garrison puts forward his own theories to what happened on that day in November. This is a testament both to the screenplay and Stone's excellent direction; keeping the story on track, slowly advancing its theories then strengthening or expanding these theories by introducing other characters and their own views as the film progresses from one scene to another. As such it's a demanding watch with a multitude of characters, some interwoven having associations with each other which are not immediately apparent, and threads of stories coming together later on in the film as it produces a more cohesive whole. These demands though are more than worthwhile and those proceeding four hours will fly by, but please don't expect Stone to answer the ultimate question... who in the end did pull the trigger which finally ended Kennedy's all too brief life.

Stone assembled a glorious cast for this production. I have never been too enamoured with Costner as a leading actor always thinking he hasn't the weight to carry such a role. I am proved wrong here though and he seems perfectly cast playing the part of patriot Garrison struggling through personal loss to find the ultimate truth. This though I feel is because he is backed up by a cast not seen since the days of The Longest Day. Sissy Spacek plays his understanding but ultimately suffering wife, Gary Oldman has the dubious honour of playing Lee Harvey Oswald, Tommy Lee Jones in the part of the man Garrison tries to pin this theory conspiracy on and Joe Pesci wonderfully acting the part of David Ferrie, an unusual right wing fanatic who may have been involved in the conspiracy itself. It doesn't end there though, sundry characters are made up of Jack Lemon, Walter Matthau, John Candy, Donald Sutherland, Kevin Bacon, Bill Murray and for good measure Jim Garrison himself playing the part of Earl Warren. All of these participants play their parts superbly and they support Costner in his leading role so well that it pulls Costner's performance up to the level which is required here.

Cinematography by Robert Richardson is wonderfully sublime with glorious hues of colour used. Sepia tones in Garrison's office, the rich golden browns of his home study late at night, the shadows or New Orleans, the colour employed in the restaurants and some garden scenes in the bright lit outdoors. Richardson is extensively used by Stone, employing his skills for most of his features and I will say that this is his finest piece of work, taking some of the techniques he realised here on his later works such as Natural Born Killers and The Aviator. The colour pallette used is wide and varied, the filming techniques an amalgam of quick grainy black and white or enhanced coloured flash backs, merged with archive footage of the time. Each use of a particular technique suits the purpose of the scene in question at the time.

John Williams was used by Stone on his earlier Born on the Fourth of July and was brought back to compose the score for JFK. It's another feather in the cap for Williams producing a flowing at times haunting yet determined score which like the cinematography before it seems to sum up the style or nature of the particular scene in question. Stone himself admits in the commentary that even the late, great Bernard Herrmann would have been proud of the piece Williams created and really I can't say any better than that. It's mixed well, entrapping the viewer in the scenes, heightening some of the tensions which Garrison and his family experience, adding a solemnity to the assassination itself and the effects this must have had on Kennedy's young family.

JFK though is not a documentary and Stone readily admits that he has taken the artistic license (something he usually does to get his point across) and for his efforts he was initially ridiculed in the media for producing something which is nothing more than a piece of left wing propaganda. This might be the case however he has still produced a sterling piece of work which captivates and rivets the viewer to the screen. Like a lot of his other works it allows the viewer a brief insight into history enabling them to fill in the gaps through their own research. It's not often that a four hour film will keep you fixed in your seat without thinking of leaving or fidgeting but this is one of those rare gems. I always look forward to watching JFK and I never tire of it, as such I recommend you give it another watch or if you haven't yet seen it then certainly give it a good try; I don't think you'll be disappointed.