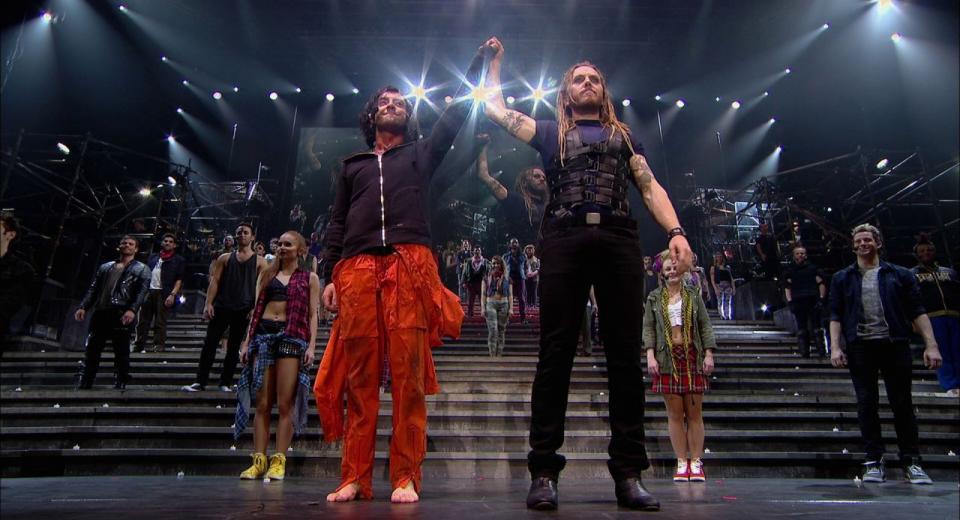 Filmed over two nights at the Birmingham National Indoor Arena, the box declares this to be 1080i but according to my Blu-ray player it is 1080p Looking at the image blur on the stills, my money is on 1080p, but whatever the case this is a good AVC-MPEG transfer with very few issues. The disc is region B only, no doubt due to its 25 frame origin. An American release is planned for 2013. The concert lighting is not really designed for TV, so is full of shadows, colour changes and hot spots. These are all faithfully re-created on the disc, without a hint of noise, colour banding or burning out. You will need good TV set up to get the most out of it, as the dynamic range is huge and brightness settings towards the top of the scale might well rid the picture of some of the finer shadow detail. With the busier wide shots incorporating the set, band, audience and general arena clutter, there is plenty going on. The wide jib sweeps and relatively pacing direction might also trip over motion smoothing leading to jerky movements and in extreme cases stutter or break up in the picture. Do not expect movie levels of quality, this was filmed in HD on conventional video cameras with the sort of mixing equipment used to produce coverage of football matches and rock festivals. For the most part the show is simply cut together without much in the way of special effects. There are a few nice camera moves – pull focuses and off shot moves with mix, but on the whole it is simple cuts and fades. All the main action and cast interaction is captured, as are all the solos. In short, a solid, competent production, but nothing earth shaking or ground breaking. There are both the simple Dolby Digital 2.0 stereo and full 5.1 DTS-MA HD soundtracks on the disc. The stereo is set by default, so you need to select the higher quality manually in the menu or via your player prior to playback. The surround mix is a disappointment for a number of reasons. To start off with, it is nothing more than a bit of ambient applause and subtle echo and secondly, this is not that well done. To record ambient in a large arena the best approach is to delay all mics back to the rear most set of ambients. On modern all digital consoles this is very easy to achieve – you simply dial in the correct delay in feet or metres on all the channels. This gets rid of out of time effects like rippled applause and muddled reverberation. On this disc, no effort has been made to time align the ambient mics and this is no doubt why the surround has been kept so low in the mix. Unlike a movie, the mix is flat – no accentuating of solos as they appear on screen, again highlighting the relatively plain camera direction. Vocals are very bright and sit high in the mix, maybe a little too high and exposed at times. Tim Minchin’s performance is not that great during the opening number and has certainly been tweaked in terms of timbre if not pitch. Little other processing other than quite harsh and intrusive compression has been used, so we lose much of the sense of space around the vocals in particular. This really is a typical, slightly lazy TV mix, following the rules laid down in some BBC manual or other over thirty years ago and not really keeping up with modern techniques or playback technology. Listening to much of the summer festival coverage over the summer brought me to the same conclusion there as well.

The band is fantastic and their mix is pretty good. Some instrumentation gets a little buried, but it sounded very similar to what I heard live. As with the vocals, dynamic range is limited and this masks some of the biggest crescendos, which is a shame. The whole balance is quite bright, with an almost glassy sound – that upper midrange sheen but without the real HF cleanliness. Part of this might be due to the might be due to the choice of mics used by the cast. Where West End shows use DPA or Countryman omnidirectional mics with fairly flat response, lush sound and wide pick up pattern, the sound designer has had to use a less refined Sennheiser unidirectional capsule more suited to cutting through a difficult room acoustic and loud band. These mics have a pronounced presence peak and much more proximity effect – where close sounds show a marked increase in bass over more distant sources. This is entirely understandable in the live environment, but does handicap the recording somewhat.

Over bright systems will really highlight the shortcomings of the audio, but even well set up rigs will still not make this recording sound as good as perhaps it could have done. Just two extras are offered. The first a rather wearisome interview with Andrew Lloyd Webber. At over twenty minutes long I struggled to stay awake until the end as he says little that is not already out in the public domain. The second feature is rather more interesting, being a behind the scenes look at the live show. From early rehearsal through to the first show, it is well produced and somewhat less indulgent than the interview. Rather like the TV series, this disc is something of a disappointment. The live show was pretty good and this is a good record of it, but there are significantly better live show recordings out there. The cast and band put in a sterling performance, but the camera direction is quite plain at times and the sound could and should have been better.

Technically this is not a bad disc, given its video roots. The extra latitude HD gives you over SD is evident and this gets closer to the live feel. More extras would have been nice and more attention to the sound production would have paid dividends.

Buy this one for Granny, but reference disc it is not.