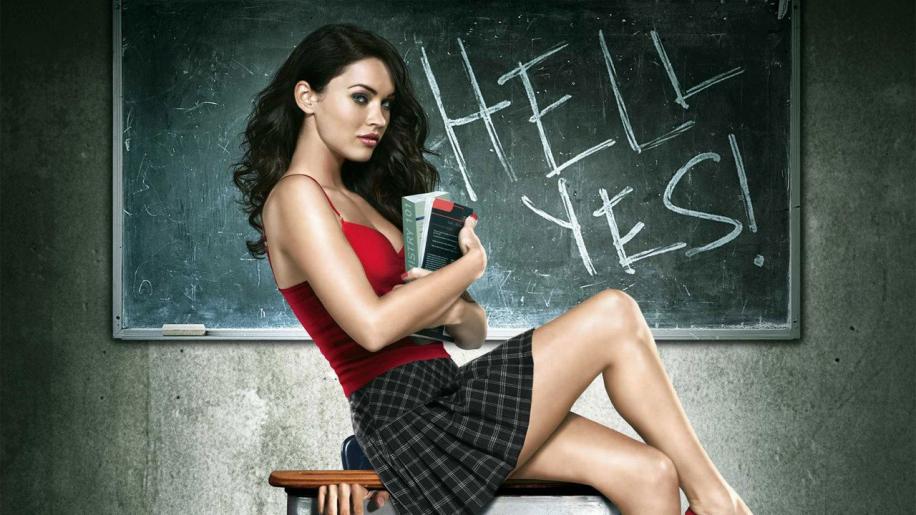 Megan Fox. Yes, that is her true birth name. She may have done bits and pieces along the way, but she finally gained international stardom when she popped the hood on the Mustang in Michael Bay's Transformers. Her co-star's character was suitably surprised, and somewhat puzzled as to where to look as this shapely, toned, beautiful brunette worked on the car, her glowing midriff making the teenage boy perspire with desire. That was how Megan Fox was introduced to the world, and it was not long before she hit the top ranks of those world's sexiest woman polls, adorning magazine covers and fuelling the adoration of her fanbase. Transformers 2 went into action almost as soon as the furore died down over the first one, and Megan returned, looking just as hot as she had done in the first. Her outfits were ludicrous, her poses undeniably sexual - this time introduced on her knees, kneeling in short denim shorts atop a motorbike. Given the fairly young target audience for the Transformers movies (ignoring its rating) Director Michael Bay pushed it to the limit when it came to common sense and decency, but there are few red-blooded males out there who would have complained about the delectable young females he had running across the screen in slow-motion. It was like Baywatch with big robots. No matter what people say about the movies themselves, and I personally still regard the second one as being far too long - even if it is much easier to endure on the small screen - there is one point that all men seem to agree on. Megan was hot. Comments range from: 'Great, fun, movie. And, wow, Megan Fox, what a stunner' to 'Too long and silly, though fun in moments. But Megan was a fox!' as if her featuring in the movie was the one universal plus-point across the planet's worth of (male) audience members.
Strangely, despite the hype and despite her status as a massive sex symbol, the girl is supposed to be quite down to earth, best buddies with the endearing upcoming young actor Shia LaBoeuf, and - at least so far - quite cautious as to what movies she signs on to. She has been quoted as saying that she is aware that Transformers was just a big budget blockbuster, and would not stand up as a reference for her abilities as an actress, and aware too that she likely gets most of her roles off the back of her looks, and so is gradually migrating - via different projects - into movies that could potentially showcase what (acting) talent, if any, she has. Next on the cards is the comic-book-based superhero Western Jonas Hex (yeah, maybe this wasn't the best idea for giving her a character to chew on, but it's a step up from Transformers), and following on from that will be Passion Plays, where she will play a girl who needs the protection of Mickey Rourke's gangster. Now, that could afford her some room to shine. Sticking anybody in a movie opposite the vastly underrated ultimate comeback king Rourke is likely to provoke a career-best performance, so there is plenty of hope for that movie, at least for me.
But while we wait we get to check out the Diablo Cody-penned Jennifer's Body, a teen horror vehicle that mixes elements of Carrie and The Faculty with a view to combining teenage cheerleaders with zombies. Diablo Cody (Brooke Busey's pen name) was the tough, Award-winning, ex-stripper scribe behind Juno, her answer to all the male-scripted, male-orientated efforts that pervade Hollywood. Juno was not quite all it was cut out to be, in my opinion, with Cody's anti-male writing coming across as a little bit heavy-handed and somewhat smothering the otherwise solid script. But what would her take on high school cheerleaders be like? If nothing else, it would surely be an extremely interesting arena for her to work her pro-feminist magic? And with Megan Fox headlining (the film was aptly nicknamed 'Megan's Body') it will surely garner a hell of a lot of interesting amidst the male population. But is it any good? Is Megan anything more than a hot fox, and is Diablo's writing only as good as the talent that speak her words?
Jennifer Check and Needy Lesnicky are BFFs, who share a close bond that often usurps the position of Needy's loyal boyfriend. Jennifer is the gorgeous cheerleader girl who gets everywhere using the power of her breasts, openly advocating their use as 'smart bombs' to get whatever you want with. Needy is her ostensibly 'plain' best friend, a clearly cute little strawberry blonde locked up behind librarian glasses and outfits that are designed to accentuate Jennifer's looks, rather than drawing attention away from her. After an innocent trip out to see an indie band play in some tiny local bar goes awry, the two get split up, and pretty-soon Needy finds that Jennifer has undergone some serious changes - literally overnight. With a strong desire to eat flesh, and a rapidly changing pallor when she goes unnourished, Jennifer is not the girl she used to be. But only Needy appears to notice, and as the bodies pile up, the small town starts to ask questions on what the hell is going on. So what on earth is Needy going to do about her best friend?
“Sexy temptress Megan Fox is hotter than hell as Jennifer, a gorgeous, seductive cheerleader who takes evil to a whole new level after she's possessed by a sinister demon. Steamy action and gore galore ensue was the male student body succumb to Jennifer's insatiable appetite for human flesh. Now it's up to her best friend to stop Jennifer's reign of terror before it's too late!”


Jennifer's Body is far from just the blurb on the back cover, which paints it as just another teen horror. If you caught the trailer, or the hype, you might have noticed that it had streaks of black comedy strewn throughout. And with Diablo Cody behind the script, there's no surprise there. But there's more. Jennifer's Body is about high school clans, girl factions and teen labelling, insecurity and sexuality. It tries to show the inner workings of two high school girls' minds, playing as a backdrop to the overt horror on offer.
Unfortunately it does not quite work. The movie attempts to mix horror and comedy and meaningful teen subplot, but the end result often feels like it just does not know what it wants to be. There is plenty of horror for horror fans, but none of it feels in the least bit scary because of the comedy. Likewise, the comedy elements are somewhat tarnished by the torn limbs and strewn intestines on offer. And any biblical allegories, or heavy notes to true teenage angst, get smothered in amidst the rest of the affair. It felt a little like watching Seagal preach environmental awareness after blowing up an oil rig in On Deadly Ground. I could see his point, but couldn't get over the method in which he had tried to get it across.
On the plus side, Jennifer's Body is more than just another teen horror with a dash of comedy. Brimming with solid performances - both in the horror and the comedy stakes - and with a fairly sharp script, it plays less like American Wedding crossed with I Know What You Did Last Summer and more like Clueless spliced with Scream. But I'm still not sure I like peanut butter and jam mixed together in my sandwiches, and with Diablo Cody's Juno-ish pro-feminist words rattling around somewhere between acutely observant and uncomfortably amusing, the end result is neither particularly appetising nor particularly satisfying.
Still, Megan Fox deserves some credit for the work she does here. She doesn't stray far from the paper-thin but likeable Transformers character she became famous for, but she does enough with her character here to show that she does have something more to offer than just her looks. She is perfectly cast as the man-eating Jennifer - at least on the face of it - but the role does not exactly offer her much to get her acting chops into, or to really prove herself. Amanda Seyfried's Needy is, however, far more rounded, allowing the character to go on quite a devastating evolutionary arc. Her lines towards the end of the movie are also arguably the most profound - her comments on Jennifer's own personal insecurity offering some nice insight into this supposedly 'perfect' entity. Seyfried also does a tremendous job at transforming - slowly - from self-proclaimed dork to tough heroine. This girl is undeniably cute, but they wrap her up and strip her down well here, and she truly convinces as the foil to Megan Fox's high school fox.
Rounding off the cast there are a few familiar faces, J.K. Simmons (J.J. Jameson from Spiderman, and also the dad in Juno) and Adam Brody (who has never really taken off after The O.C. but does quite well here), as well as relative newcomer Johnny Simmons, who makes for a likeable if very passive boyfriend for Needy. They all do extremely well with characters that would - in any other similar film - have been undeniably paper-thin and, at the very least, allow us to get to know some of them (even if we don't like them).
In terms of cuts, having not seen the Theatrical Version first, it is difficult to personally comment on the superiority of the Director's Extended Cut. Although it runs five minutes' longer, it offers no more sex or gore, instead rearranging scenes, adding flash images and extra dialogue and basically giving audiences a slightly more off-beat version of the film. I think that it is the definitive version to watch, and the Director herself supports this notion, although those who have seen the cinema version and have come away disappointed are unlikely to have their opinions swayed by this alternate cut.
So Diablo Cody's second screenplay was another disappointment for me, after the highly acclaimed Juno, and whilst Karyn 'Girlfight' Kusama's stylish direction, some solid cast performances and an immersive soundtrack (including everything from Black Kids' I'm Not Gonna' Teach Your Boyfriend How to Dance with you to Snoop Dogg and Akon) keep the whole package clearly within the boundaries of above-average entertainment, there could have been so much more had the initially promising concepts been taken through a more meaningful arc. Cody wants to say a great deal, wants to come across as being extremely observant and insightful, but also wants to dress the whole package up to look pretty and pack it with effective horror and biting wit, but there are just too many ingredients in this particular mix, and the end result remains untrue to any single one of these ideas. You'll probably watch it, remain vaguely intrigued throughout, wonder whether you should be laughing or trembling, briefly ponder the social commentary of it all, realise that whatever pretext the filmmakers had for including the prolonged lesbian kiss in it had no effect in real terms other than to serve as titillating, and dismiss and forget about the whole affair at the end. Entertaining, but basically an unfinished high-concept melting pot of ideas and genres that just don't mix.