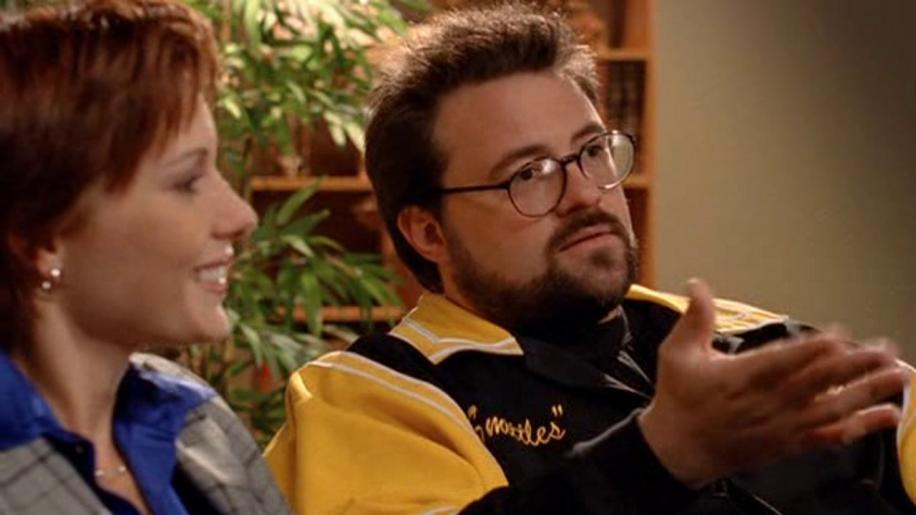 The picture measures at widescreen 1.78:1 aspect, contrary to the full screen 4.3 aspect that the DVD is advertised at, and appears to be anamorphically enhanced for widescreen TV's, at least there was no need for the non-anamorphic zoom on my TV, even though there is no written evidence on the cover to prove it. The picture itself has a very TV look to it, almost as if it were filmed with 16mm print then blown up to 35mm; this gives it a rather grainy feel. Colours wise there are no problems, all are bold bright and shiny, contrast and brightness wise, however, were only average; blacks are at times tending towards the grey, loosing some depth to the picture. Digitally there were neither compression problems nor edge enhancement; in fact the picture was all rather soft, lacking a decent edge, though there was no actual loss of detail. Worst areas, night shots in the distance, luckily there were not many of them. In the end I felt that picture was nothing more than average, certainly not bad, but lacking everything needed to make it stand out. The disc has been given two Dolby digital tracks, an all new 5.1 and the broadcast 2.0 surround. Slightly annoying, it is the 2.0 surround track that is the default, because as a track it is rather flat. It has a fairly decent range, but lacks clarity and any decent bass, with little to no effects. The 5.1 track is a far better option adding some much needed separation and lowering the bass significantly to give some nice depth to the stage. However, there were still little in the way of effects, in fact the rears were hardly used at all, it was the front three that maintained the action throughout. Of course the show doesn't really lend itself to full on surround action, but there were areas (the prom, on the streets, school corridors) when some decent ambient effects could have been used to really open up the stage, sadly this was not the case and whilst it is an improvement on the 2.0 track, it is still nothing to shout about. First up there are three audio commentaries with Kevin Smith, Jason Mewes, Stacie Mistysyn, associate producer Jim Jackman and writer Aaron Martin; and there is an order with which to watch them. West End Girls has two tracks, A and B, with one on Goin' Down the Road, the order to listen to them is track A, the track on Goin' Down the Road and then Track B. The reason for this is because all three tracks were recorded in one session, but there was so much being discussed that not everything the participants wanted to say was said, so an additional track was recorded for West End Girls, but chronologically it was last. Those that have listened to any Smith commentary tracks know what to expect here, in amongst the wealth of information and serious points there is a multitude of laughs. For the first track, Smith leads most of the conversations, but as time wears on, he takes more of a back seat and the conversation just flows, there are many, many laughs on the track, and genuinely funny moments too; many at the expense of Stacie Mistysyn. The final track is the most serious with Jackman and Martin taking the bulk of the conversation, and for that reason is probably the hardest to listen too, not quite boring, but certainly drier.Next up there is a thirty minute interview with Kevin Smith, now I quite like the man, and can listen to him chat for ages, and he gives full and frank answers to the unseen interviewer. Inevitably there are portions of what he says repeated in other areas of the disc, but I didn't mind, he answers questions on Degrassi, his involvement, how that came to be etc. Those that think less of Smith will probably skip this section, he has done a thousand 'interviews' like this before on other discs and whilst the conversation is steered towards the Degrassi angle there is plenty of overlap with his other projects.

The intro rant is an extended version of the few lines given as the disc boots up. Smith and Mewes talk to a static video camera about what this edition DVD is, some of there experiences whilst filming and generally swear and misbehave as most have come to expect them to do. Of the seven minute chat only twenty or so seconds were used for the actual introduction to the DVD.The How to Film a Ninja Fight Scene shows us all the unedited raw footage shot for said scene before it is edited down to the broadcast material, also selectable. Plenty to watch here as the pair do their thing with the swords, interesting behind the scenes film complete with bad language and mistakes, very entertaining.There are a selection of bloopers, containing the usual gaffs, though surprisingly little, the professionalism of the crew must mean that there are very few mistakes. Also included are the outtakes of the promo for the show, with Smith and Mistysyn having an absolute blast! This section contain a few seconds of deleted scenes that add nothing to the overall story.

There are two photo albums, one of the fictional Jay and Silent Bob go Canadian eh, the other of Degrassi, plenty to see if you are into photo slide shows.Two text sections, cast and character bois, great for those that need introducing to the characters and the people that play them (like me), not so much for those long time viewers that would already know this stuff; and quotables, funny or otherwise, lines uttered during the show, Mewes' are the best.

Finally there are trailers for the D:TNG series and five for other shows, none of which I've heard of. Jay and Silent Bob Do Degrassi is an odd little disc, Degrassi itself as a teen drama will obviously have its fans, this disc however is aimed more at the Smith fans out there with its unrated tag and constant bad language; it is a clever ploy as the disc will appeal to both parties. The episodes themselves are very easy watching, characters and situations are identifiable and as such coming into the season so late is still accessible. Though it is the extras that really make this disc, there is plenty to keep fans watching, funny, sassy, ballsy and rude, everything you'd expect in a Smith DVD.