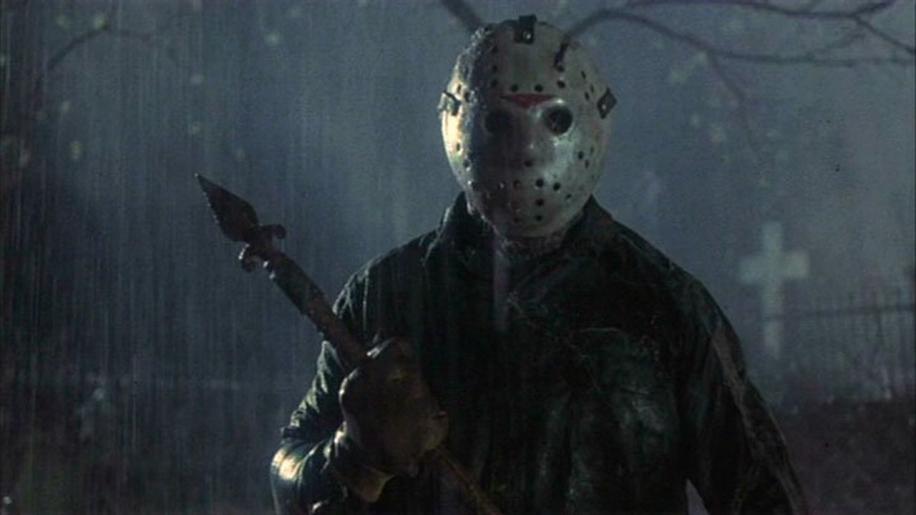 In 1984 Paramount Pictures released “Friday the 13th: The Final Chapter” which was intended to put the final nail in Jason Voorhees' coffin. In fact original make up effects expert, Tom Savini (who had done the FX for Part One) came on board as he said as he gave birth to Jason; he wanted to be the one who killed him off. Directed by Joseph (Invasion USA) Zito, The Final Chapter was a massive success. This meant that Paramount had no intention in ending the series. Just one year later saw the awful “Friday The 13th Part V: A New Beginning” fans of the series were not happy in fact no one was happy. The main killer wasn't even Jason, just a poor Jason impersonator called Roy. Roy had seen his son murdered so he dressed up as Jason and started hacking up the residents of a halfway house. Regardless of the fact that Part V was slated by the critics and hated by the fans, Paramount ploughed ahead with Part VI. Now this is where things get interesting....

Frank (Species) Mancuso, JR the film series' producer turned the creative reins over to Tom McLoughlin, the director of a little known but respected horror thriller from 1983 called “One Dark Night” starring Meg Tilly and Adam West. McLoughlin not only was a competent director but also was known to write his own material so he was entrusted to bring back Jason with a vengeance. So “Friday the 13th Part VI: Jason Lives” was born.

The film starts with Parts four and five's survivor, Tommy Jarvis (this time being played by Return of the Living Dead's Thom Mathews) visiting Jason's grave with a friend and digging up his corpse to lay to rest his demons. Unfortunately due to a strike of lightening Jason is resurrected and murders Tommy's friend. This makes way for the entire series best credits, the camera zooms in on Jason's eye and in the reflection he walks across the screen 'James Bond style' and throws a knife towards the camera. We are then treated to one of Harry Manfredini's terrific musical scores. People have suggested why on earth would a serial killer be buried and not cremated especially one as infamous as Jason. Jason's grave was actually tended by a friend of his Father's (who is never seen in any of the films) the old guy who tends the grave actually gets killed by Jason later on in the film. Jason's Father makes an appearance in the novel based on the film which was based on an early McLoughlin script. It is this novel which explains why Jason has a grave and how he got to be buried there.

Tommy makes his way to the Sheriff's office who is having somewhat of a problem believing that Jason is on the rampage again and locks Tommy away in a jail cell. At the same time two camp counsellors played by Tony (Ghost) Goldwyn and the director's wife Nancy McLoughlin bump into Jason on a deserted road. Naturally Jason finishes them both off with a handy fence post but not until Tom McLoughlin's script reveals that Part VI will have a tongue firmly placed in its cheek. Lizabeth (Nancy McLoughlin) tells her boyfriend (Goldwyn) when confronted by Jason that she has seen enough horror movies to know that anyone wearing a mask isn't friendly. Naturally Goldwyn's character ignores her warning and they both pay for crossing Jason. Meanwhile back at the Sheriff's station, Tommy meets the new camp councillors led by the Sheriff's daughter, Megan (Jennifer Cooke from V: The Series). For some reason known only to the film makers, Megan takes a shine to Tommy and later on in the movie, she helps him escape after he convinces Jason is back.

I remember first watching Jason Lives back in about 1987 when the now defunct CIC Video released all the Friday the 13th films from Part 3 to 6 in consecutive months. Watching as a 15 year old blood thirsty gore hound back then, the film's attractions were obviously the blood 'n' guts and the attractive females in the cast. Over the years, one's film choices do change and you get to know and appreciate different genres and types of films. However, although I own all the Friday the 13th films right up to Freddy vs. Jason, Part VI: Jason Lives still has a special place in my heart.

Why is Part six a favourite you may ask, that is a question I have asked myself that same question over the years and as I write this review I have got to think why it is the only 'Friday' film I can watch over and over again. As previously mentioned Tom McLoughlin's script not only respects the slasher genre but gently makes fun of it. Never in an obvious way such as “Scary Movie” but subtle little clichés of the genre are resurrected and placed on the screen. I have already mentioned above Nancy McLoughlin's line where people in masks are not always friendly and the fact that Jason is now even more indestructible due to him being brought back to life Frankenstein style. There is a fair amount of comedy from the supporting players such as Jason dispatching the paint gun office guys with his trusted machete and sticking a knife straight through the head of Cort, a randy councillor after his girlfriend's face gets pushed into the bathroom wall on their motor home. This may not sound all that funny but the lovemaking scene preceding it certainly is. Let's just say young Cort finishes a bit too early and his girlfriend is none too pleased. Also, McLoughlin unlike other directors in the series realised that people liked Jason so he is constantly on screen stalking and slashing, not hiding in the shadows until the last twenty minutes or so on previous films. This time around Jason was portrayed by CJ Graham an ex- bouncer, whose only other real screen credit of note is the psycho cop in “Highway to Hell”. Graham is a good Jason and has good body language which comes across well on screen, but is no match for Kane Hodder who took over the role in part seven - The New Blood.

Anyway, back to the story. Jason in his infinite wisdom makes his way back to Camp Crystal Lake (now renamed Forest Green) along the way killing whoever he comes across. Tommy finally escapes from the Sheriff's office and along with Megan goes to the camp to finish off the hockey masked one for good. The climax of the film is well directed and for a simple slasher picture has a fair amount of tension as Tommy battles with Jason on Crystal Lake. Watching Freddy vs. Jason a couple of years ago annoyed the hell out of me because Jason was supposed to be scared of water as he supposed to have drowned as a child. Now part six and seven featured action in the lake and part seven was set on an ocean liner. Is Jason scared of water, I seriously doubt it. Maybe the writers of Freddy vs. Jason should have watched earlier instalments and realised this. Oh well never mind it was a fun film. Part six ends with Jason supposedly dead and at the bottom of the lake, but part seven was just a year or so away and boy, was that an awful film. Jason Lives also features several original songs from rock legend, Alice Cooper and these are played throughout the movie. Alice even did a video for the film's theme song in which Jason made an appearance! 'Jason Lives' unfortunately suffered at the hands of the American censors, the MPAA and several scenes were trimmed for gore. The film is still fairly gory, but with the humour, pretty good acting, a great script and good direction enjoy Jason Lives for what it is - nearly ninety minutes of pure escapism.

The film did reasonably well at the box office (enough to warrant a part seven) but the cinema-going public were switched on to a certain Freddy Krueger. His nightmares for New Line Cinema were going from strength to strength and making more money then the 'Friday' films could ever dream of. Eventually the public were soon sick of Freddy and it took the team up movie a couple of years ago to bring Messrs Voorhees and Krueger back on the big screen where they belong. This was made easier that New Line now owned Jason as they bought the rights from Paramount for Part IX: Jason Goes to Hell. My biggest regret is apart from “Jason X” and “Freddy vs. Jason” I never got the chance to see a Friday the 13th film on the big screen. Part 3 in 3D would have sure been great fun!!