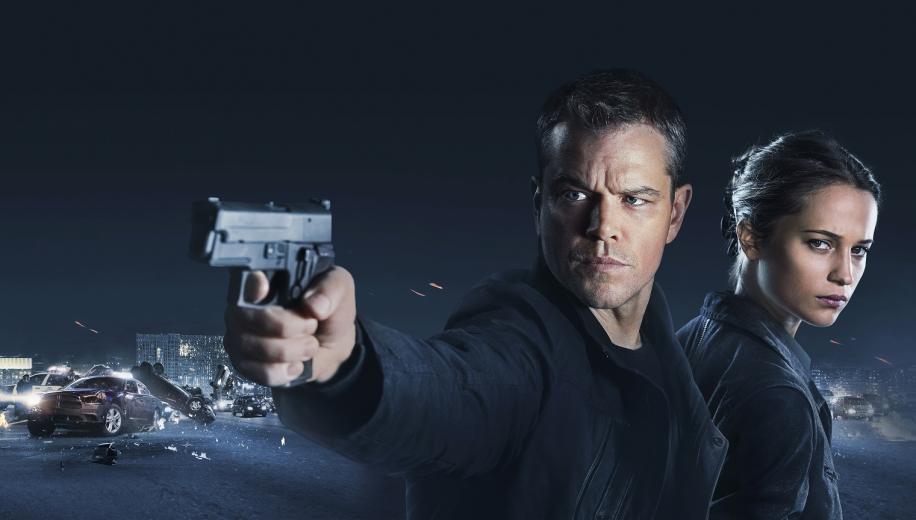 Returning to the franchise that they defined, the real Jason Bourne – Matt Damon – and his director of choice – Paul Greengrass – remind us of everything we've been missing.

Unfortunately, as much as it is great to have them back – and it is great – there was a cost to their absence for the last instalment, with the star/director team forced to retread old ground. The plan to bring Bourne back into his own franchise was clearly, to the studio at least, a simple case of "do it the same as before, only bigger and louder", and after the enjoyable but ultimately dead end spin-off, The Bourne Legacy, it would appear that neither Greengrass nor Damon were in a position to argue. However this tactic doesn't bring anything new to the franchise, despite the opportunity for such, allowing new audiences to jump right in, but leaving long-time Bourne fans a bit perplexed as to why the same stuff is happening to the same guy fourth time out.
And so, the potential for an intimate, personal tale of revenge – both old and new – between two seasoned veteran assassins whose history crosses decades and carries with it a weight of irreconcilable animosity and pure bloodlust is ultimately squandered, as Jason Bourne just plays it safe. It injects this inspired, small-scale premise into a much grander, more formulaic affair, which throws every large scale conspiracy plot into the mix and has yet another shady CIA unit trying to kill/capture a minding-his-own-business-until-they-killed-someone-close-to-him Bourne. It plays out as a slick, efficient and engaging movie that is still basically little more than a Bourne Greatest Hits album. And no matter how good the old hits are, it would have been nice to have something new in the mix.

The film was primarily filmed in Super35 but some scenes were also shot in Super16 along with other scenes captured digitally at 2K, 2.8K, 4K and 6K resolutions. The 35mm negative was scanned at 4K, mastered in 4K and rendered in 4K but given the mix of footage and the fact that the visual effects were done at 2K, things aren't as straight forward. The Digital Intermediate (DI), which the company who did it insists was handled at 4K, appears - at least to the naked eye - to looks suspiciously like a 2K DI, as has been listed on IMDB, leaving the detail level, technically, little different from its 1080p Blu-ray counterpart.


Despite being impressive, this isn't the best title to showcase the benefits of UHD

Nevertheless, the High Dynamic Range (HDR) and Wider Colour Gamut (WCG) elements play a bigger part in making an impression, immediately delivering a more organically brighter image which retains finer, higher peaks, and allows for richer shadows that, in turn, reveal detail which isn't picked up on the Blu-ray. Close-ups pick up the hairs on the back of the heads, and every crag on Tommy Lee Jones's worn face - it may be unforgiving, but it's also very revealing. Colours are deeper yet more natural, and the image is undoubtedly more impressive.

Of course, this isn't the best title to showcase the benefits of UHD on, with the trademark shaky-cam on overdrive, the seemingly inescapable wobble leaving it hard to pick up a single, sharp still upon which to take a closer inspection. Whilst it would be hard to technically fault, the inherent 2K DI/VFX limitations leave this also, technically, inferior to natural 4K releases which, coupled with the fact that the style of the piece doesn't exactly lend itself to 4K, results in a good but far from outstanding presentation.

Jason Bourne was released theatrically with a Dolby Atmos soundtrack and, in the case of China, an Auro 11.1 mix but for the Ultra HD Blu-ray release Universal have gone for an impressive DTS:X immersive audio mix which itself has a tremendous DTS-HD Master Audio 7.1 core that delivers the key elements with power and presence. Dialogue remains precisely defined; clearly and coherently disseminated across the front and centre channels, rising above the remainder of the proceedings no matter how chaotic things get.

Effects pick up the frequently crowd-based cacophony, crafting an immersive, engulfing aural envelope which puts you into the thick of a riot, or at the centre of a bustling convention. Action sequences deliver roaring engines, bone-crunching crashes, and thunderous explosions with precision, ringing out across the aural landscape, hammered home with LFE underpinning. The score fits seamlessly with those of the preceding movies but, at the same time, fails to really distinguish itself from the others, nevertheless remaining a key element in propelling the narrative, maintaining the tension, driving the action sequences and delivering the impact.

As is the norm, the Ultra HD Blu-ray disc itself is bare-bones, with the extras on the accompanying Blu-ray and thus, matching up to the features on the standard BD release. Entirely Featurette-based, the salvo of extras here are informative but largely unexceptional, although they do provide a little more background into both the production and the return of Damon/Greengrass to the franchise


The salvo of featurette-based extras are informative but unexceptional

Bringing Back Matt Damon as Bourne looks at the actor's return to a defining role for him, with Bare-Knuckle Boxing looks behind the training and choreography done for these early sequences. Close Quarters Combat looks behind some of the latter fight sequences, whilst Underground Rumble highlights the final fight. The Athens Escape focuses on this key riot sequence, Convention Chaos looks at the building-based crowd and the dynamics of shooting that (as opposed to the riot exteriors) and Shutting Down the Las Vegas Strip details the car-crunching chase sequence. Jason Bourne proves that the Greengrass/Damon duo have still got it, but will they ever do anything new with it?

Universal's Ultra HD Blu-ray release of Jason Bourne hits UK shores in advance of the US counterpart and boasts impressive 4K visuals and a stomping DTS:X immersive audio track, as well as the standard BD with all the accompanying extras housed therein. Although not conventional 4K material, and thus never likely to be used to demo the format, it still offers a marginal uptick over its BD counterpart.

As for the film itself, certainly Jason Bourne proves that the Greengrass/Damon duo have still got it, but based on this 'greatest hits' package will they ever do anything new with it?