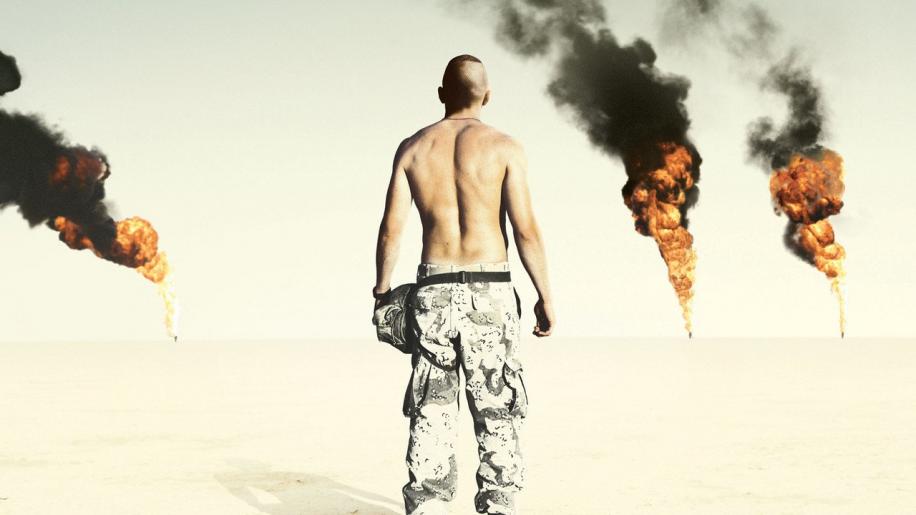 Jarhead is presented with a 2.35:1 aspect ratio anamorphically enhanced widescreen transfer. Detail is generally excellent, with clarity throughout, little softness and negligible grain (mostly present during the intentionally poorer quality news interviews). There is also no noticeable edge enhancement, nor any other signs of digital artefacting. The colour scheme is reasonably wide, although it is admittedly occasionally limited by the setting and thoroughly bleached out during the daytime desert shots. Blacks are solid and deep, allowing for decent shadowing and superb night-time sequences, including a couple of fantastic sunsets and a disturbing oil-fields-burning-at-night scene. The transfer itself exhibits no signs of any print damage whatsoever.

Jarhead comes with a solid Dolby Digital 5.1 accompanying track. Dialogue, from the grunts to the screams to the frequent barking of orders, comes clearly through the frontal array, with some off-screen yells occasionally encroaching on the rears. The surrounds really come alive during the explosions and gunfights, allowing for great dynamics across your surround sound set-up. They also allow for some decent bass to be thrown into the mix. The score is totally in-line with the production, brooding enough to have you at your most contemplative, whilst also able to carry you through the drama with a certain rousing edge. Overall it is a fairly good six-speaker effort.

In the way of extras, we start with two Audio Commentaries. The first of these is with the Director himself, Sam Mendes, who has a great deal to say about his important work. Unfortunately, since I think he was misdirected with his approach to this subject-matter, I tended to disagree with many of his comments. Still, it is nice to hear from him here and he does offer quite a lot of insights into the production that should keep fans happy.

The second Commentary is with Screenwriter William Broyles Jr. and Author Anthony Swofford. They discuss the original work, what was adapted and changed and how well it all came together in the end. From the sounds of it, the original work would have had much more impact if translated better onto screen, but learning about the differences proves to be quite an interesting escapade.

Next up we get a set of Deleted Sequences called Swoff's Fantasies, which are dream sequences that occur at key points in the movie where Swoff is forced to do something he does not want to and so he imagines taking revenge. I think that they should have been included in the final cut but the Optional Audio Commentary tells different, with the Director Mendes and the Editor Walter Murch discussing why they were cut.

We also get the full-length versions of the News Interviews that were in the final cut of the movie. They aren't a great deal different and you can see why they were trimmed down.

Finally we get 11 Deleted Scenes also with Optional Audio Commentary with the Director and the Editor. They explain the time constraints and how that was the biggest reason behind the cuts.

Jarhead is probably a fairly accurate portrayal of some of the losses suffered out in the Gulf conflict and makes for an entertaining if slightly disappointing War movie. Here we get decent video and audio presentation, with a bucket of interesting extras, rounding off a package that is sure to have fans of the movie clicking the 'buy' button right now.