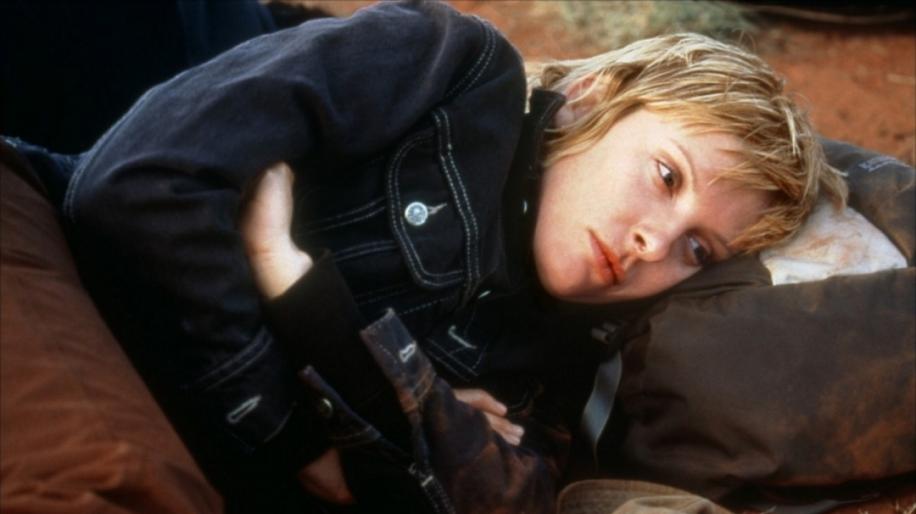 Sandy Edwards (Toni Collette) is a no-nonsense partner in a business that writes geological software. Sandy is charged with the task of escorting a traditionalist Japanese businessman, Tachibana Hiromitsu (Gotaro Tsunashima), around Australia in an effort to sell him their software. This appears to be a deal which is very important to Sandy's business and so corners cannot be cut, with Tachibana's every wish catered for. However, the cultural divides between laid back Australia and orthodox Japan strain their working relationships. This is a matter made worse when most locations involve Sandy and Tachibana driving for five hours with only their company to keep silence at bay. Things take a turn for the worse when their 4x4 becomes stuck in the middle of nowhere with outside communication impossible. There is a real danger that they could die in the desert, and both Sandy and Tachibana must work together to survive the rigours of the Australian Outback.

Japanese Story is a low budget Australian movie that, on one hand, looks at how two cultural divides can be surmounted. The “other hand” is a plot device that I couldn't possibly tell, you will just have to watch the movie yourself! Saying that, the first half is the more interesting, with superb acting by both main actors. Gotaro is wonderfully confused, especially when he lands at the rural airport. Everything seems so un-mechanised or simplistic - where he expects some one or some thing to deliver his luggage, he is invited to retrieve it himself form a trolley. Similarly, the Japanese card-swapping tradition is completely, and unintentionally, ignored by Sandy, simply by her stuffing his card into her back pocket. Later she observes this tradition played out by some more culturally aware people and feels suitably embarrassed by her ignorance.

This first half of Japanese story is full of such minutiae set against some truly mesmerising, epic scale, cinematography. The whole mining complex, in which Tachibana is interested, is larger than life and looks like it should be in something like Star Wars, than this reality. The mining blast, for instance, is one of those awesome moments you wish you could have experienced yourself rather than, albeit very impressively, on DVD.

Not wanting to delve too deeply, but the second half is completely different. The comical asides and easygoing nature is absent, replaced by deeper emotional resonances. These are perfectly emoted by Toni Collette who continues to show a very natural and believable performance, despite the shift in tone.

The pacing of this second half is all too slow, however, with many aspects of Sandy's situation revisited unnecessarily. If the latter half were a latter quarter, then this would be a near perfect movie. As it is, the midway shift looses its significance by the end which is a shame