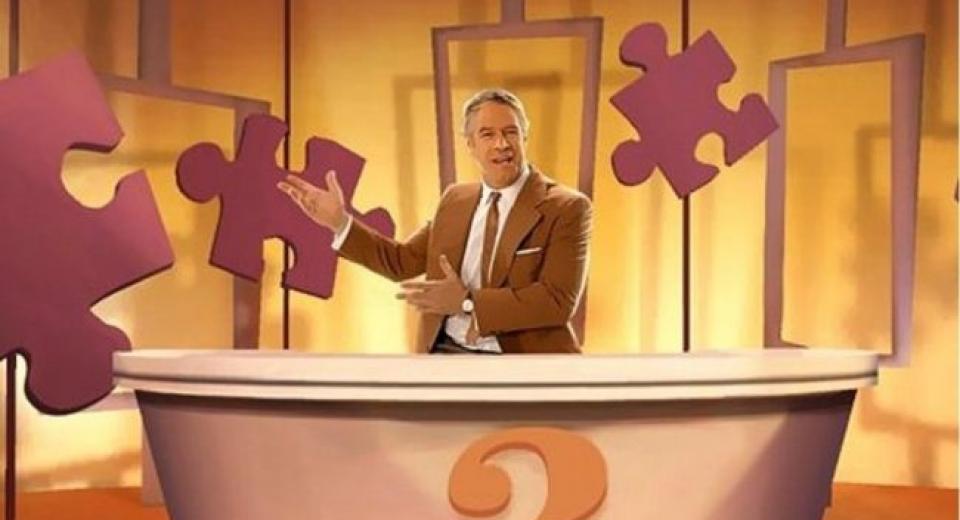 Sales of the 3DS have started to steadily climb in all territories, but unfortunately the speed at which quality titles are getting released has yet to match this upswing. So, with no sign of a Professor Layton on the stereoscopic horizon, I thought I’d take a peek at a puzzle game that can be picked up for peanuts and may just satisfy some new 3DS owners' craving for brain-benders, James Noir's Hollywood Crimes 3D (grammar pedants, don't be fooled, James himself hasn't committed these crimes).

Developed by Ubisoft Montreal, the studio have a reasonable track record for making games with head scratching elements, from the enigmatic Myst IV to the adventure puzzler and hasty tie-in Lost: Via Domus (which was notable for offering an easy 1000 gamer points – if I was being harsh I’d say that facet, linked to its brevity, sold it to many a score-whore or gamer eager to boost their e-ego). Even the throwaway nature of the latter hid a few decent conundrums and the overall package showed that even TV series making it up as they go along could be given a structure of some kind.

You take the role of a contestant on The Incredible Puzzle Masters Show in Hollywood 1961. The intro is half noir half Madmen promo, you first hear of a series of crimes from a hack at a typewriter in a Marlowe-esque voice-over, then it's all kitsch sliding geometrical shapes as the opening sequence kicks in proper. These early moments have a slick feel, they're quite cinematic, setting the scene well. The 3D capabilities of the console were practically made for this type of cut-scene, as the use of layered two dimensional objects and camera sweeps proves effective. The game itself uses less of this unique console selling point. There are only so many puzzles that can make use of a changing perspective to bring the 3D pop out of the screen, but the first taster puzzle (rotating mini shapes until the jumble resembles something recognisable) proves that it can be done (though its always on the tempered side, so no worries about headaches or eye-strain) and that's arguably the only reason for its inclusion. There's quite a bit of voice acting, which is usually a bonus for a handheld game, but the scripting isn't the sharpest and it's eminently skippable.

Your job is to continue to beat the score of others on the quiz show. You do this by selecting puzzles of various difficulties, the harder the mental task the more points you accrue. There are hints, as you'd expect, for when you get stuck, but the completion of a puzzle without using any will bring with it a bonus. As you continue to set the quiz show world alight, you'll gain a fanbase, chipping away at the established puzzle-groupies of your competitors (because, as we all know, there's only a finite amount of proper quiz fans) by 1% for every 20 points scored. Your adoring public will send you letters which can contain new puzzles to solve, and each correspondence that floats down from your letter box will also endow you with an extra hint that can be used outside of the TV show.

And there is more to this than the quiz show elements detailed thus far. You've probably noticed, the game's title conjures an image of smoky dens of iniquity and femme fatales, young hopefuls dreaming of hitting it big in Tinseltown, only to find themselves on the walk of fame as a chalk outline. As you continue your ascent to Vorderman status, a series of crimes is being committed in the Los Angeles area, and it wouldn't be much of a detective game if you couldn't try your hand at being a part-time Columbo.

Whilst going for a post-quiz drink with host Glen Darnby, his sozzled conversation is interrupted by an old friend, Lt Matt Booker (voiced by Elias Toufexis – Adam Jensen in Deus Ex: Human Revolution), a G-man on the case of some grisly murders. He fills you in on the murders, the killer has left puzzles at the crime scenes and the victims happen to be former champions of the show; he needs your analytical mind to solve the murderous enigmas and help him crack the case. In terms of atmosphere, James Noir's Hollywood Crimes 3D feels pleasingly like a videogame rather than an emulation of another medium better suited to telling a story. It knows how preposterous the scenario is, and plays to it. It doesn't try too hard to be a handheld LA Noire-lite, the acting talent is all slightly made-for-TV style, playing detective with a nod-and-a-wink. Controls are simplistic, as you'd expect for any game looking to get in on the Layton action; accessible is the key, there's no point implementing fiendishly clever uses of the 3DS's tech if it gets in the way of your core casual crowd enjoying the game. You'll move objects and select things on the touch screen via taps and swipes with the stylus, whilst the circle pad can be used to look around vaguely three-dimensional scenes. In general, the more three-dimensional and complex the instructions, the easier it will be to complete. Some of the early puzzles, showcasing the ability to turn items around on the top screen, are almost insultingly easy. The more fiendish puzzles are the same as they always are with this type of game, those that look straightforward, rely on minimal rules, and force you to use cold logic to determine the answer.

What you're looking for in a game like this is that rush that follows a “eureka” moment. It's a fine art crafting a narrative driven puzzle game with a story, if you go down the highbrow route you inevitably end up with something like Suda51's impenetrable (but brilliant) Flower, Sun, Rain; Professor Layton gets by thanks to charm and animation techniques, Room 215 has a slow paced surprisingly adult noir feel and this game opts for the latter approach (the title should have given it away) but with a breezier air, such is the plethora of lightweight brainteasers they couldn't possibly have fitted into a proper murder-mystery narrative, hence the quiz element.

There's a temptation not to look too deeply into this type of game, assuming everyone will get stumped by a different type of puzzle, but the truth is James Noir's Hollywood Crimes 3D is stylishly presented but blowaway in terms of cerebral depth. There's a real possibility that you'll get stumped early on simply because you don't assume the answer will be as obvious as it is. The instructions sidestep Layton's sparse explanations, avoiding the annoyance at a poorly worded and vague ruleset but also in the process missing out on any real thinking outside the box. The rules are clear and if anything over-explained for what many of the puzzles actually require. Repetition is a problem, the set of twelve puzzles you choose from in each round of the gameshow will start to feel small, but at least you have a choice. The flip side being that, because there's no real punishment for a wrong answers, the multiple choice variants are easily ploughed through (assuming no one's looking over you shoulder). The 3DS' tech is utilised in a few places, such as the tilt sensor, but the staple diet of your grey-matter stretching gameplay will be straightforward stumpers like mazes, filling in coloured blocks or a renamed version of the peg removal game solitaire.

Look up the answer

This repetition of simple, oft seen conundrums may seem unambitious, but in a way it works, following the path of what's tried and tested. It ties in with the murder-mystery in a campy manner and the FMV (well there are a few frames a second, so perhaps less of the “full” motion video) brings a reasonablly unique atmosphere and link to the ongoing chain of puzzles. It's a short title, and the central story will be over in little more than five hours, but as with all such games there will be a host of head-scratchers you can return to in order to solve. At the right price, this hammy brain-teaser will tide you over until Prof and Luke finally hit the 3DS scene.