Adventuring and platforming mischief in abundance 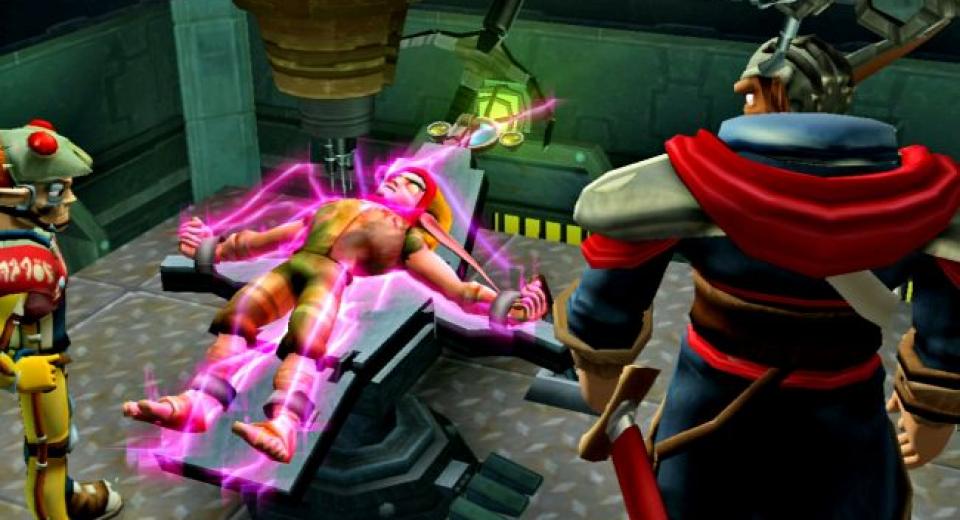 It wasn’t long ago that I had a bit of a whinge about how we were seeing numerous HD collections of titles that did not really deserve an HD makeover. Granted some of them are worth your money but most of them are shameless plugs and cash-ins. So who does the mantle fall to as one of the next to release an HD collection? None other than Naughty Dog.

If there was one developer who had the credentials to do something amazing, then it surely would be them. Unfortunately it isn’t a compendium of Crash Bandicoot’s best bits, but the next best thing; a Jak and Daxter collection. This dynamic duo were one of the unsung heroes of the PlayStation 2 era for one good reason and it’s as simple as the cast from Geordie Shore; the game was awesome.

So, as if Naughty Dog didn’t have enough on their plates as it was, they have now provided us with this title. Albeit, a bit half-heartedly given that it couldn’t be found in most major high street retailers which may have been down to a distributor’s error. Trust me I tried, some didn’t even have it on their database so it wasn’t really off to a strong start.

But, after the traumatising experience of trying to pick this up it is well worth the price that you pay for it. If there was ever a game that would cheer you up and break you away from the mainstream titles out there at present, then this would be it. I mean come on, the simplicity of its gameplay and appearance is wonderfully charming. Across all three titles it is the same, and the HD makeover that the games have received only adds to this experience. What’s more, because Sony are adamant in pushing a PS3 selling point, this package comes with a fancy 3D mode too for those who are fortunate enough to own a 3D set.

For those who never played the games before, Jak and Daxter was a title that offered up 3rd person action and adventure in a similar light to the aforementioned Crash Bandicoot series. Most of the game takes place via platform sections whereby you must traverse dangerous caverns and ledges with a few vehicle sections to boot. The focus is on simple combat, exploration and item acquisition which all complement one another perfectly.

The series begins when Jak and Daxter get caught up in some mysterious business with regards to dark ego (bad life force) resulting in Daxter getting transformed from a human into a weasel-like creature. As a result, they travel together in order for him to be returned to his natural form. The only trouble is, those who are brewing up a spot of bother are the only ones who can save him since they have kidnapped the controllers of ego and life; the Sages.

So their mission is two-fold; to rescue the Sages and also get Daxter back to his original form. After completing their first quest, Jak finds himself imprisoned in the second title and exposed to dark ego and giving him an alter ego that sees him enter a frenzy. The title favours a city landscape but plays pretty much the same as the first. The third title sees Jak hit rock bottom yet again after being banished for crimes against the government. It is argued by many that the series lost its way in its later years, especially when spin-offs were seen on the PSP, but this criticism was to be expected from any series’ fans, as it’s hard to follow up initial franchise success.

What you can say about the games though, regardless of gameplay and story, is that they all look excellent here in this collection. The level of polish given to them is enough to make them look fresh and nice to behold on a modern TV set, but not so much so that it takes away the look and feel from back in the day. Watching Jak tear about the place and seeing the environment pass you by, with the added textures and detail from the HD makeover, is great.

The game’s controls are a bit old fashioned in terms of the menu selections and camera inversions, which have been criticisms for many of these collections but it’s harsh to hold it against them. It’s nothing that will spoil your game, but you will sometimes press the wrong button and end up with an undesired result, so you have been warned.

These issues do not help when you consider that the enemies you will face are present as a means of overwhelming you through number as opposed to their intelligence. They are easily defeatable through kicks and punches, but when they swamp you it becomes a bit more of a faff to carve your way through them. These sections make the difficulty spike in places and seem a bit harsh at times despite there only being one difficulty level to play through. When you do fall to your demise, they re-spawn more often than not too which can only add to your frustrations. The shortcomings with the controls, when you take into consideration the rest of what the title has to offer, are instantly forgettable whilst the script is charming (indicators that Uncharted was going to be amazing) as are the characters and the world that you explore. Exploration is the main ingredient here as, like with Crash Bandicoot, you are tasked with gathering miscellaneous objects along with completing the story on your way.

Gathering these items, such as Power Cells and Precursor Orbs, is what progresses the story along with certain tasks requiring a given number of Cells. Cells can be gathered by completing random quests or by giving up collected Orbs which act as in-game currency.

You can instantly tell that these were the guys behind Crash Bandicoot because everything about the title is well thought out and effective. From the aforementioned characters and dialogue, to the environments and the sounds you encounter from it. Running across a rickety bridge was never as pleasing as it is here, creaking under your feet in a weird yet satisfying way. Curiously though, Jak stays mute throughout the entire game whilst Daxter churns out reams of dialogue (sometimes coming across as annoying rather than humorous) and engages in conversation between the Non-Playable Characters you encounter.

A bit of a design flaw with the first title however; it does not always tell you how to use your abilities that you are given from the off. Finding out you can roll-jump and execute a crouch-jump is left for you to discover, or if it does tell you how to do so, then it is very briefly and instantly forgettable. The game also shows its age in terms of character control as Jak can be a bit stubborn sometimes, either getting stuck on the scenery or not completing the desired action. Depending on how much of a hoarder/explorer you are, you can fire through these titles pretty quickly but because of how enjoyable they are, you won’t feel as if you have been short-changed. The series has a nice flow to it, introducing new abilities and sections just at the right moments with regular boss fights to notch up the difficulty every now and again.

As part of the latest craze though, Sony have pushed this with 3D capabilities for all three of the titles, assuming you have a compatible set. This mode does give you added perception of depth which, in theory, should help you cross gaps with much greater ease. Now I don’t doubt the fact that this is probably so for the majority of players but personally, I found the 3D often detracted from the game as it became more obstructive in some areas.

If you’re after a little nostalgia though, you can easily forget these problems with the 3D mode and focus on what it was that you loved about the titles the first time around; the charm factor. If you can get your paws on this then you won’t be disappointed, regardless of the price you pay for it because you can play each title over again without tiring. However, collecting those last few Orbs and Power Cells may just drive you insane …

The Jak and Daxter Collection proves that old-school platformers are just as enjoyable as they were back when originally released. There are some issues with the character control and how the camera rotates when looking around the world but there is nothing that can detract from the charm that is emphasised throughout the entire package. Thoroughly enjoyable for any gamer regardless of age or genre preference.