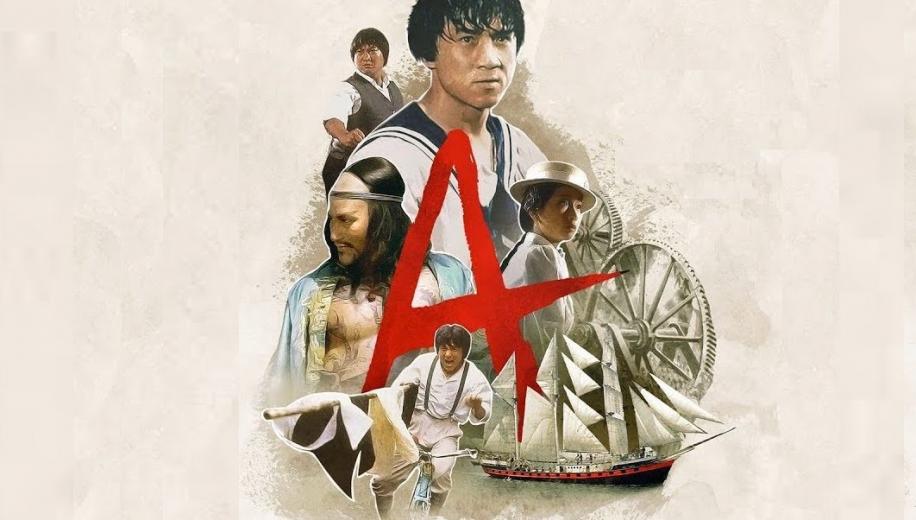 If Jackie Chan's best HK franchises are Police Story and Armour of God, then Project A comes a close third.

Although not as well remembered as Chan's biggest HK titles, he's on fine form here, with an early barroom brawl between the land and maritime police officers amidst the best staged gang fights ever, pitting dozens of each group against one another in what appears to be a frenzied mess of chaos but must have actually been choreographed to within a inch of its life. Of course, Chan is in the middle of it in a superb fight of his own, which, if you consider the prep work that must have gone into that one little take, is impressive all by itself.

The film would be the first of three films involving the 'Peking brothers' of Chan, Yuen Biao and none other than Sammo Hung, and all of the fight sequences involving the three are utterly jaw-dropping; the unbelievably quick moves reminding you why these guys are so well known as being the best in the business. It's Chan, of course, who stands head and shoulders above the others, going above and beyond in some of the most breathtaking stunts of his career.

Sure, the bike moves are great, and it's always superb when he runs up a near-vertical obstacle, making it look insanely easy, but the Buster Keaton clock tower stunt has to be seen to be believed. In the days when Tom Cruise does these things on The Burj, and on helicopters for the Mission: Impossible films (themselves no small feats), these Chan movies are a reminder of some safety-wire-less stunts which are quite literally bone-crunchingly dangerous. Whilst not quite top tier Chan - the HK echelon for this remains the Police Story and Armour of God franchises, as well as a few select other outings - it's very good fun nonetheless.


The movie has been given a whole new lease of life and for most fans it's going to be a joy to rediscover it.

The 35 year old movie looks surprisingly good given the obvious caveats - it's a Hong Kong production, shot on a limited budget several decades ago. Detail is better than ever before, with the 2K remaster bringing a fabulously rich texture to the piece, and pulling as much fine detail from the print as you could possibly hope for, whilst retaining a suitably filmic level of stable grain. The colour scheme is dated but naturally rendered with a nice palette, healthy skin tones and decent enough black levels, although those, of course, fare the worst.

Sure, there's some visible softness around the edges, and some scenes fare worse than others, but that's really only to be expected and, honestly, the movie has been given a whole new lease of life; for most fans it's going to be an absolute joy to rediscover it.

Eureka also step up in the audio department, affording the movie not only the original Cantonese mono option (which, it should be noted, is the default) but also a Cantonese DTS-HD Master Audio 5.1 remix. For completeness, there are two English options as well, an English DTS-HD Master Audio 5.1 dub and a hilarious 'original' English alternate dub, neither of which should be considered the preferred choice unless you want that added laugh.


Eureka also step up in the audio department.

On the six-speaker lossless Cantonese remix there's a little more breadth to the spectrum, with a few elements - nominally background noises in bars and on the ocean, but also the score - spilling out to the rears, but this is largely a fronts-and-centre affair, as perhaps you'd only expect.

Dialogue remains prioritised, only occasionally sounding a fraction tinny at the high end (although compared to the Cantonese mono it's a vast improvement), whilst effects - with that added *slap* sound pervasive in Jackie Chan (and plenty of other chopsocky) movies of the period - come through clearly. The brawls are more expansive, with plenty of breaking glass and chairs, whilst the score affords the piece a richly fun, but also quintessentially 80s, Chan accompaniment. Overall, it's a decent upgrade and a strong audio offering.

Eureka deliver the UK Blu-ray releases of Jackie Chan's Project A and Project A Part II in a box set, crammed with extra features and presented in impressive packaging, much like their Police Story 1 & 2 box set.

Project A's extras are themselves bountiful, including a salvo of great Interviews with Tony Rayns and supporting cast members Lee Hoi San, Yuen Biao, Dick Wei and Michael Lai, as well as some lower quality Deleted Scenes which include some more martial arts, and an even longer and more painful Alternate Ending Credits & Outtakes Reel. The disc is rounded off with a Lunar New Year Introduction and a 2K Restoration Trailer, and the package itself is rounded off with a Collector's Booklet with further Interviews and Stills.

It's a happy time for Jackie Chan fans.

Sure, most fans will place the Police Story and Armour of God franchises above anything else in Chan's HK output, but his Project A films are early classics too and well worth checking out. All of the humour, slapstick, physical comedy, expertly staged fight choreography and bone-breaking stunts are right here for you to enjoy.

Eureka serve up Jackie Chan's Project A and Project A Part II in a lavish 2-disc box set, benefiting from 2K remastered picture quality, a plethora of sound options, and a whole host of extra features, all in impressive packaging that matches up to their earlier Police Story 1 & 2 box set. It's a happy time for Jackie Chan fans!