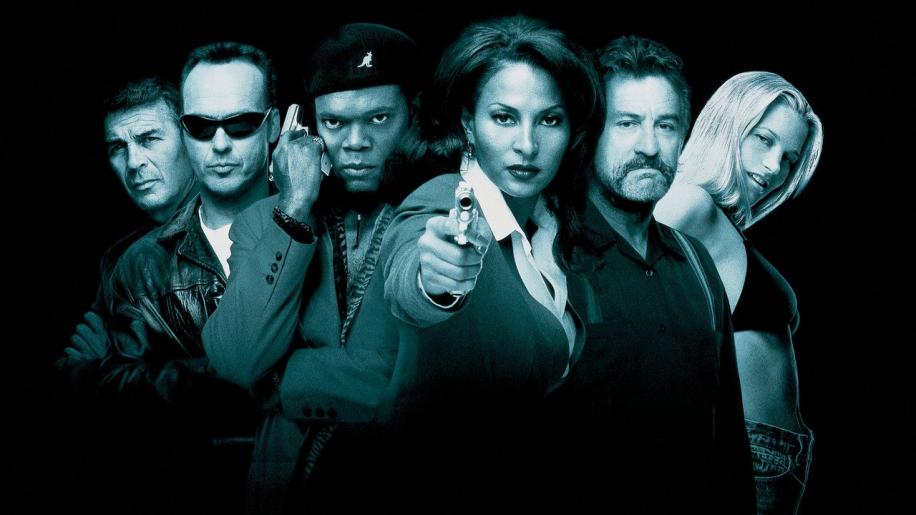 I really can't complain about the picture. There is a faint mist of grain in the car park scenes outside the mall. In that same scene, colours seem to have an overbright pallor at times, though this may have been intentional. Detail is sharp (Forrester's close-up in the first Bail Bond office scene is very impressively detailed) and there is a lack of artificial process remnants. All in all, a very good picture indeed. If there is one thing that Tarantino does with aplomb it is his movie's soundtracks. I can't think of a single one that has been anything less than stellar and Brown is no different. Whether it is the clear dialogue or crisp music, there isn't anything to complain about. The only thing that lets Brown down is that there isn't any truly standout sonic moments, but then Brown isn't that kind of movie. The fact that the soundtrack is so good and dynamic, considering the dialogue led content, is remarkable. Superb. Of the two tracks, DTS is the choice, being clearer and more musical when the need arises. How It Went Down is an extended documentary with interviews with all the main cast and crew. How It Went Down delves much deeper into the movie than the standard “Made for HBO” documentaries, which makes this extra worth watching. Elmore Leonard, author of Rum Punch on which Jackie Brown is based, makes some salient points, too.

Normally, when a celebrity is interviewed, the answers are edited down into a super condensed five minute slot, or spread across a documentary. You can normally tell their interview has been chopped, and I have always been curious why they don't just show the whole lot. Until now. Prior to A Look Back At Jackie Brown, I think Tarantino must have drank a dozen cappuccinos, followed with several bottles of Red Bull - the guy just can't keep still, or speak at anything less than breakneck speed. It's hard to stay with him for five minutes, never mind the near hour this interview goes on for. Bear with it, though and Tarantino reveals a deep, near eidetic memory regarding cinema of any kind. It is refreshing to see someone who is so fervently a lover of such diverse movies. At one point he describes how Michael Keaton manages to play the same role in two different movies (Jackie Brown and Out of Sight) made by two different studios within six months of each other. Tarantino is near effervescent as he recollects how “...the studios put aside their bullshit and made something artistic happen!”. As I said it is hard to stay with him, but it is worth it.

Chick with Guns Video is the full version of the video that Ordell uses as a gun guide. The video is perfectly done. You can imagine some AK47 manufacturer shipping this out to their favourite customers at Christmas.

There is a lack of diversity within the extra's, despite the quality of the main two, which marks down an otherwise good show.

Brown is the least Tarantino Tarantino movie . To some this may be off putting, but to me Brown is the most watchable character driven movie he has made.