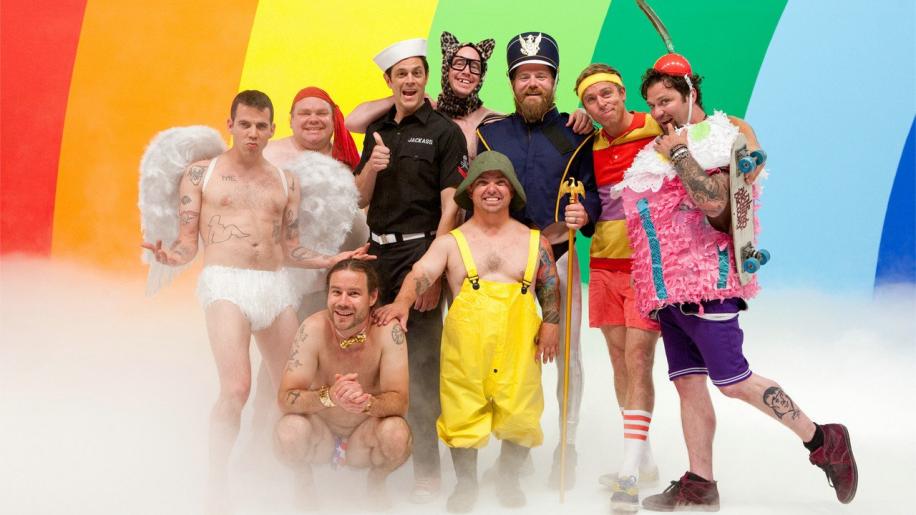 All the discs are full screen 1.33:1 aspect and all filmed with handheld camcorders. As you can expect the picture is shoddy, badly lit, shaky, blurry and amateurish. Colours vary from bold to washed, brightness and contrast varies from light to dark. There is reasonable detail to the picture, it displays none of the video bleeding, though it does suffer a little from contrast white out in a few areas, a common feature with camcorders. Digitally there are no compression problems or any edge enhancement. This is video, without any digital clean up, as bad as a home movie, but you know what, it doesn't matter, because it all fits in with the show. Decent camerawork or clean up of the picture just wouldn't work, so bad as it is, its still fine. Only a Dolby digital 2.0 stereo sound track is provided and that is the one that was recorded the day the stunts took place. Like the picture there has been no effort made to clean up the sound, it can vary from loud to soft depending on the position of the microphone; it also suffers from wind noise as well as the occasional hiss. Again, like the picture, it doesn't seem to matter, everything fits with the show and to see and hear it any other way would be wrong. All three discs have a commentary from all of the Jackass team, as you can imagine with eleven blocks locked in a room watch stuff they filmed themselves, it is a pretty riotous event. Plenty of over talking, laughing, swearing and general mayhem. The lads seem happy to talk about anything and everything, rarely staying on track with what is happening on screen, unless is to shout encouragement or wince at their own pain.

The fourth disc contain all the other extras and starts off with Gumball Rally; a round trip from London to Russia and back without stopping, a journey of approximately three thousand miles. The entire journey is filmed by the guys in their own imitable style, few 'jackass pranks' except the prerequisite stripping off. However it is quite an enjoyable watch, not least to see some areas of northern Europe and beyond, be it from the back of a car. It too has a commentary, this time from Johnny Knoxville, Steve-O, Chris Pontius, Jeff Tremaine and Dimity Elyahskevich, pretty much the same effort as the prievious efforts, though this time the guys keep on track a lot more.

Next up is the Where are they now documentary, though the actual where are they now segment is confined to the last five minutes. The rest of the feature deals with the genesis of Jackass and the various exploits that the lads got up to off camera. They are all interviewed in pairs, by an unseen interviewee, and answer leading questions that allow much latitude for stories to be told. What comes across is that although the show is dumb, the lads themselves are quite savvy, even if they like to act the fool, and view their time on Jackass as a stepping stone to bigger and better things.

Cribs is another MTV produced show where a 'celebrity' allows an MTV camera crew into their home so we can see how they live; the version he is the Jackass edition and features Steve-O, Bam Margera and Chris Pontius' homes. They all live well, except Steve-O that's seems to like living in squalor.

Jackass cast appearance has three of the guys at an MTV award event, not in the least bit interesting.

Abduction and Monkey Night 2 are two more skits from the show, the first where the lads 'abduct' Brad Pitt from outside a cinema and Monkey Nights sees the lads running riot in monkey suits.

The photo gallery contains fifty photos from the three series' all with a written explanation as to what was going on.

Finally there is a 22 page booklet with glossy photos and a nicely written prose about the show, its genesis, some of the skits that weren't shown and other relevant information. Love it or hate it there is no denying the impact of Jackass. This box set is a perfect example of how to bring the best of the worst together. Fans will need no encouragement to get this set, the extras alone are worth a shelling out for; those that are in two minds, you could do a lot worse.......