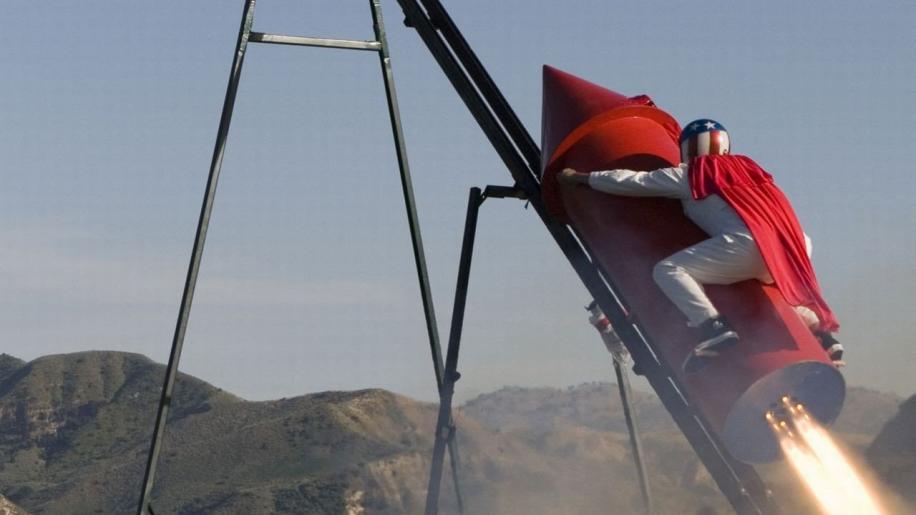 The first Jackass movie was chock full of shocking scenes, sequences showing the extreme limits of physical endurance and, occasionally, depravity. But for every daring act within the first movie, this sequel tops it in every respect. If you thought seeing someone getting a tattoo in the back of a Hummer that is being ridden off-road couldn't get any more painful, then here you're privy to a man being branded with a red-hot cattle iron. It's a whole new level of pain and there's plenty of it.

As with the previous installment, the movie has several different types of act - the relatively harmless prank-style sequences (including a great comedy moment where Johnny Knoxville is done up as an old man and takes his fake grandson on a trip involving booze, cigarettes and foul language), the fairly masochistic painful elements (as with the above, when Bam gets branded, or when Steve-O pulls a fishhook through his mouth), the daring stunts (Steve-O versus the shark, some fun with a live snake and rocket lake-jumping) and the more crude scenes (from farting through a pipe into a helmet attached to somebody's head to defecating onto a miniature model toilet).

Personally, I find some of it entertaining, some of it amusing, some painful to watch, and some simply unnecessary. Unfortunately, for all of the engaging sequences involving rockets and rampaging bulls there are just too many toilet pranks, which are neither feats of endurance or threats to life and limb, but instead just - frankly - disgusting. Still, for the first half it is mostly daring stuff, and it rounds off quite nicely, if you can just get through the myriad bottom-orientated pranks in between.

Johnny Knoxville's clearly at his best here as well, truly the star. I was expecting, given his increasing popularity in Hollywood mainstream, that they would not insure him to do some of these stunts, but he certainly did not take a back-seat to the action. From the opening gambit, where he (and his team) are running from a rampaging herd of cattle, to the blindfold challenge where he gets hit by a bull, to the Penny-Farthing bicycle stunt he engages in, he is on top form and well up for being seriously injured. He even gets dangerously spun out of control by a misfiring rocket on his attempted 'lake jump' trick.

The rest of the crew are, of course, all present and correct: Bam 'branded' Magera, 'fishhook' Steve-O, Chris Pontius, Wee Man (who gets truly confused by an electric chair), Ryan Dunn, Preston Lacy, Dave England and Ehren McGhehey. From riding active fire-hoses rodeo-style to being surprised by a hidden fist behind a wall-sign to riding mini-bikes through a loop-the-loop (and often falling off upside down), they get up to everything here and it is mostly mad and enthralling, the kind of stuff you are often compelled to watch despite the urge to avert your gaze. Fans of Jackass will lap this stuff up and newcomers who can stomach some of their antics will no doubt enjoy this second cinematic outing.