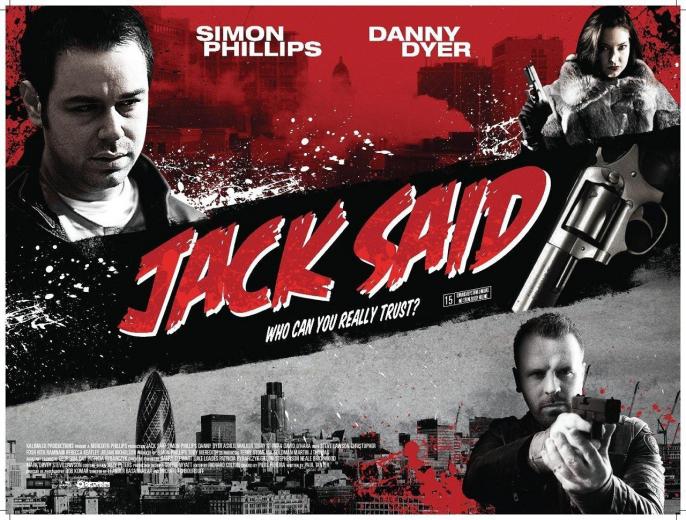 'Jack Said', released in 2009, was directed by Lee Basannavar ('Briefing'). With only one feature presentation under his belt, Basannavar takes over from Bob Philips, who helmed 'Jack Says' (2008). This movie is in fact a prequel to the first instalment of the “Jack” series of movies. Both movies were written by Paul Tanter and adapted from his popular and well illustrated graphic novels. A comic book adaption is always a difficult task to undertake. The correct casting is imperative and a sizeable budget is often required to faithfully recreate stylistic elements and complex characterisation. I personally have not read any of Tanter's work but word on the street is that they are worth checking out. Every once in a while a movie becomes available for review that I know absolutely nothing about and this is the case here. I always approach movies with an open mind so let's see how this independent British effort at a comic book adaption fares.

There are numerous familiar faces on show here, including one of my guilty favourites, Danny Dyer ('Severance'). I'm not too sure what it is about Dyer's performances but they always seem effortless and convincing. I know that this is partly due to the fact that he plays characters close to his own real life “bad boy” persona but I think that he's got some talent (if you can excuse some poor television choices). Here he plays Nathan. Simon Philips ('Jack Says'), who also produced this movie, takes on the lead role playing Jack Adleth. Rita Ramnani ('Jack Says') plays Erin; David O'Hara ('Wanted') plays the police chief; Ashlie Walker ('Casualty' - TV Show) plays Natalie and Terry Stone ('Doghouse') plays The Fixer.

Jack is a lowly street thug, who harbours a dark secret which he will go to any lengths to protect. Many suspect that he is in fact a closet homosexual, even his closet friends. Initially it appears as though Jack is sensitive to these accusations, seemingly to protect his tough guy persona. It later transpires that Jack is in fact an undercover cop, his true identity a complete secret to all, aside from the upper echelons of Metropolitan command. His friend and shady accomplice, Nathan, is another goon who is slowly working his way up the ranks of the criminal underworld; which is run by The Guv'nor. Nathan, however, has ulterior motives and steals a briefcase containing something incredibly valuable right from under the big boss's nose. Forced to disappear, Nathan entrusts Jack with the care of his sister (Erin) and also instructs his friend to work for The Guv'nor (and to act as his eyes and ears from within the organisation).

Jack also his own motives; namely to attain enough inside information to put The Guv'nor and his crew behind bars for life. As the movie progresses, Jack begins to rise through the ranks, transforming into a ruthless killing machine. He is desperate to obtain the required insider information and then get the hell out of the undercover cop business forever. Things start to go awry when Jack begins to fall for Erin and attracts the attention of The Guv'nor's ambitious and ruthless daughter, Natalie. Under the thumb of the poisonous Natalie, his world begins to unravel, as she forces him to carry out killings and other depraved acts. As the falls deeply in love with Erin and slips further into the criminal underworld, he begins to lose sight of what he truly is; cop or criminal. Hitting the bottle hard, the line between right and wrong becomes increasingly more blurred. For the remainder, we see Jack come to terms with who/what he really is, as he is forced to make some life changing decisions.


I have to admit that I did find elements of 'Jack Said' somewhat confusing; perhaps viewing 'Jack Says' would have shed some light on the plot. There are numerous flashbacks that contain concepts from the first instalment, which can lead to a muddle of past/present/future flashbacks near the close of the movie. The entire piece seems unnecessarily convoluted, with many secondary characters introduced briefly but with no accompanying explanation as to who they are or how they fit into the story. Archive footage of Mike Reid, who passed away in 2007 ('Jack Says' was in fact the last project that he worked on), as The Guv'nor, features in a couple of the scenes. He is obviously included for continuity but his actual face only appears once or twice throughout the entire production. His presence is, however, implied through various shots of meaty paws slamming on tables or manipulating fine Cuban cigars (from the shoulders down). I found this aspect of the presentation very strange indeed and it only adds to the already muddled plot. In saying that, Reid's voice is imitated very well by David Hahn and initially I did not even realise that it was another actor providing Frank Butcher's dulcet tones! The only aspect of the entire presentation that I found any enjoyment in was the manner in which Basannavar presents the material. He most certainly shows potential talent and includes some innovative shots and camera angles. There are rotating shots and quick switches, which build tension and add to the excitement. Basannavar also employs various filters and black and white segments to set the tone and enhance the gravity of some of the scenes. These can appear striking at times and are for the most part skilfully employed. While it's clear that this inexperienced director demonstrates some potential, it will take the right source material and cast to really get the best from him.

I found Philip's portrayal of the wise-cracking Jack somewhat unconvincing. His actions seem forced and contrived and he just does not have the purported menace or physical presence of his comic-book character. He appears soft and weak; with his fight sequences appearing poorly choreographed and badly acted. Some of the punches and kicks clearly do not connect and the reactions from his assailants, as he pummels them, are over the top and unrealistic. As he rises to the top of the gangster food chain, he faces up to other powerful bosses with a confidence that just doesn't wash. His interactions with Erin feel awkward and I just did not believe that they were falling in love. He completely failed to produce the rage and instil the fear which his character projects. This is a very wooden performance and I was not impressed at all. The rest of the cast don't fare much better and many just don't appear to have the skills necessary to make the jump to the big screen. Even Dyer, who I usually find enjoyable, appears to realise that this movie is a turd. I was in two minds about Walker's portrayal of Ashlie; initially she appeared completely over the top and seemed to concentrate more on chewing the scenery rather than delivering her lines with conviction. As the movie progressed, I grew enamoured with her character and while she doesn't do a fantastic job, it's most definitely acceptable when compared to the other acting talent on show. All of the goons in this movie are so clichéd that I actually chuckled at a few points. There's even a “silent but deadly” mysterious hitman, whose character seems somewhat pointless. The other cockney henchmen resemble overgrown gorillas and all have a permanent grimace, which is suppose to instil fear but instead suggests constipation! None of the thugs in this movie say 'Good-bye' but rather instruct everyone, be it hooker, thug or civilian, to “**** off”. This ham-fisted attempt to establish the “hard-men” in the opening twenty minutes almost turned me off completely. If I want to see classic British gangster thuggery, I'll pick up a copy of 'The Long Good Friday' or 'Lock Stock'; both of which are far more stylish and better executed than this effort.

I feel as though the entire production is over ambitious, taking into consideration the cast and budget. This movie is in the same vein as 'Sin City', in that it is adapted from a gritty graphic novel, wherein the city and its inhabitants are painted as sleazy, corrupt and ruthless. It attempts to recreate the film noir style of 'Sin City', with a plot which bears a distinct resemblance to the vastly superior 'The Departed'. There's also a nod to 'Pulp Fiction', by way of the mysterious briefcase, which was stolen from The Guv'nor. It contains something of immense value and beauty but its contents are never seen by the audience. Unfortunately, this movie does not even remotely compare to any of the aforementioned blockbusters and just feels like a watered down version of these already stellar releases. The plot is weak and at times obvious, partly due to the fact that it's all been done before (and to a higher standard). The budgetary constraints mean that the sets are limited. For example, Nathan hides out in an abandoned warehouse, which appears remarkably similar to the Guv'nor's warehouse hideout. The scale of the production also feels too small, as exemplified by the “climatic” shootout, which is laughably bad and completely unbelievable. The action content varies and there are a couple of shocking scenes of brutality but ultimately it's the unconvincing nature of many of the fight sequences which let this aspect of the presentation down. I think that this movie is just too big for its boots. It tries desperately to replicate the noir style of Miller's graphic novel adaptation, while infusing a plot similar to 'Infernal Affairs', and fails miserably. This type of amalgamation really requires a skilled and experienced director, a very strong plot and a stellar cast. Unfortunately, 'Jack Said' has none of these attributes and actually feels more like a couple of after-the-watershed episodes of 'The Bill' strung together, rather than a high impact thriller. Perhaps when all three instalments of the 'Jack' movies are viewing back to back, the overall story will shines through but I just found this movie (in isolation) bitty and disjointed. Disappointing to say the least but do not despair, there's 'Jack Falls' to look forward to in 2010.................this reviewer will most definitely be abstaining.