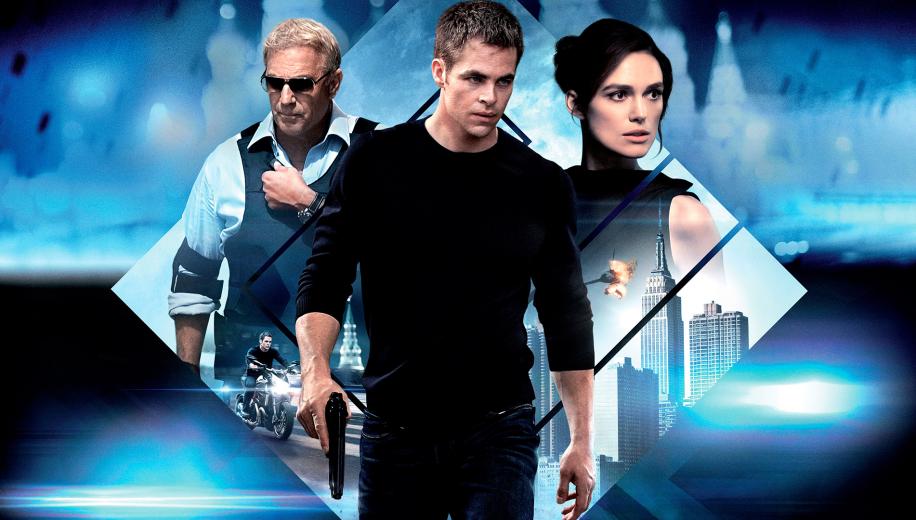 Shadow Recruit is a competent albeit generic reboot that's Jack Ryan in name only, honing its standard spy action with a now-mandatory Bourne/Bond vibe, and forgetting that Ryan's everyman CIA analyst was anything but a superspy.

Whilst Branagh is more than capable of staging action (Thor), and Pine a strong enough lead for any action-adventure, they lost sight on everything that made Ryan, Ryan. Instead they produced this clean-cut, skillfully-edited and generally well-put-together thriller which ostensibly tells the backstory to a character some will know well, but which pays no heed whatsoever to the things that made him such an atypical hero in the first place, instead folding the whole thing into a generic spy actioner world which offers little to nothing new to those familiar with the territory.

Still, for all the faults noted, there's no denying that Shadow Recruit is entertaining and diverting, even if it sometimes feels fitfully so. Everybody does their jobs well – Pine is likeable, Knightley is suitably endearing, Costner is reliably stoic and Branagh occasionally effuses menace. The action too, is, as aforementioned, well-staged, with one particular chase proving effective, and a couple of twists capable of genuinely blind-siding you.

But the fatal error that takes this film down a point for me is the fact that it could be the origin story of any spy. It could be a prequel tale about Ethan Hunt's recruitment in the early Mission: Impossible years. Jack Ryan is painted as little more than a clumsier, frequently in-over-his-head, Bond variation.

Gone are almost any of the trademarks of Clancy's most popular hero, who could think his way out of any situation, and solve any puzzle with intellect and resourcefulness; gone is the upstanding patriot who would do the right thing no matter if that meant facing off against the President of the United States. Enter: 2014’s Jack Ryan, Mr. Just-Another-Super-Spy.

The 2014 final film in the series, Jack Ryan: Shadow Recruit, is, unlike all of its predecessors, the only title in the collection sourced from a 2K upscale, which has been used here for this Ultra HD Blu-ray release.

Despite being the only entry sourced from a 2K Digital Intermediate, much like the upscaled 4K presentation of Mission: Impossible - Rogue Nation, Shadow Recruit looks excellent, and is at least on par with the native 4K presentation of the last entry, The Sum of All Fears, beating - at least on a technical level - the three preceding movies. Of course it also had the best source, the 2014-shot feature already looking largely reference on its Blu-ray release, and certainly following suit here, finding it hard to provide anything beyond a modest uptick in detail and clarity. The refinement is still evident, fine-tuning the already impressive foundation and giving it that added level of crispness.

The implementation of HDR, WCG and Dolby Vision all benefit this presentation more than the prior ones too, particularly since it doesn't appear to have been given that monochromatic pass that certainly affects the 4K presentations for the first three movies, and is still more obvious on The Sum of All Fears than here, where Shadow Recruit escapes almost completely unscathed, happy to peddle in its cool electronic blues, warm golden luxury, and more explosive confrontations with some vibrance and pop. It may not be the standout film, but it's arguably the standout presentation.

Jack Ryan: Shadow Recruit, as with the other Clancy titles in this Jack Ryan Collection, and as with the 4K Mission: Impossible 5-film Collection, hasn't been afforded any kind of Dolby Atmos enhancement, with Paramount going that extra mile for Dolby Vision, but rendering the audio in the same shape it was in a decade ago for the Blu-ray release which, again, as with the later M:i titles, now means an upgrade to at least DTS-HD Master Audio 7.1.


All in all, a demo and reference offering.

The track pretty damn impressive, a stomping lossless mix that boasts both precision and potency, crafting an engaging, immersive experience that makes the most out of the lacklustre material. Dialogue transcends the rest of the elements on offer, remaining crystal clear and coherent throughout, largely given precedence over the frontal array and dominating the mix where appropriate.

Effects are very well-observed indeed, with a rich and finely-tuned soundscape which has been designed to observe the tiniest of atmospheric elements as well as relish the more thunderous components. From gunshots to car and even helicopter crashes, the surrounds are expertly utilised and the LFE channel given voice throughout the proceedings, but the quieter stealth moments boast almost equally impressive observational touches, and the various settings and setpieces help contribute towards a consistently colourful atmosphere. The score is fairly nondescript and forgettable, but offers further material which the surrounds and LFE channel wield engagingly. All in all, a demo and reference offering.

The 4K disc carries over the Commentary, whilst the Featurettes and Deleted Scenes are on the Blu-ray.

At least, through the lens of the more consistent offering afforded by the latest Tom Clancy's Jack Ryan TV series on Amazon Prime, 2014's Jack Ryan: Shadow Recruit is no longer the final nail in the coffin of Clancy's prized protagonist. Whilst a serviceable spy thriller, efficiently made and extremely polished, it's cookie-cutter plotting and characterisation which completely ignores everything that made Clancy's novels - and the character of Ryan - so unusual in favour of just another Bond/Bourne-lite affair.


Completely ignores everything that made the character of Ryan so unusual in favour of just another Bond/Bourne-lite affair.

Paramount's UK 4K Ultra HD Blu-ray release of Jack Ryan: Shadow Recruit - at least for the time being - is only available as part of the 5-film Jack Ryan box set (which also includes The Hunt for Red October 4K, Patriot Games 4K, Clear and Present Danger 4K and The Sum of All Fears 4K), and whilst it's arguably the weakest entry, it also looks and sounds the best. The set comes highly recommended.