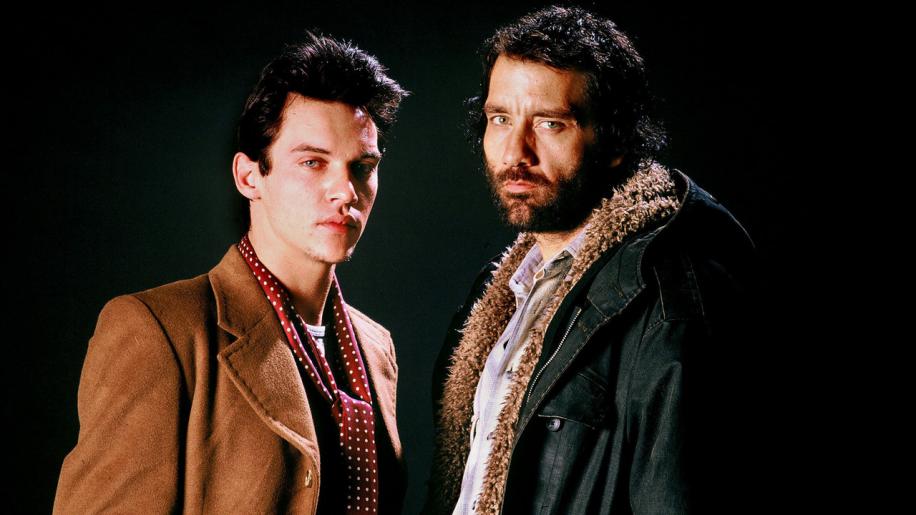 Michael Caine was largely known for his more charming roles as an almost comedic cockney before Mike Hodges got ahold of him. He was always playing a variation of his Italian Job character Charlie, not far off his Alfie character either. Hodges' seminal Get Carter is a landmark in British Crime Cinema history, and a high point in Caine's career. His character, Carter, was the ultimate anti-hero, a vengeful gangster returning North from London to find his brother's murderers. When Croupier hit our screens a few years ago, Hodges long-awaited return to form, I thought that Clive Owen was finally going to start getting the roles that he deserved. But after I saw King Arthur - where his moody demeanour did not particularly lend itself towards the role of the fabled hero - I was not sure what would happen next. Hopefully Closer and the upcoming must-see sleeper film of 2005, Sin City, have given him a shot at Bond - nobody else is currently better qualified - but amidst all of his Hollywood features, he did another Hodges film, I'll Sleep When I'm Dead.

Now whilst Croupier was a generally positive, compelling drama with a charming, almost chirpy performance by Owen, I'll Sleep When I'm Dead was his turn at playing a vengeful gangster anti-hero, this time returning to London from the three years' isolation in the Wilderness in order to find his brother's murderers. So far, so Get Carter, and whilst some expected Owen here to similarly replicate Caine's performance as Carter, and others were worried that to do so would itself be impossible - neigh sacrilege for even trying - his role here is markedly different from any expectations. Sure his character Will Graham is another tough-as-nails gangland boss, but he is another breed of edgy anti-hero altogether, more quiet, but just as assured and just as dangerous. And it is Clive Owen's ability to do mean and moody that makes this role his own.

The story goes little further than a tale of revenge, although it does provide a lesson perhaps in the consequences of your actions, taking in regret and wanting to change along the way. It is painted in a slow-burning studied fashion, with keen observation of expression and circumstance - using the picture paints a thousand words adage, more often than not, as a substitute for over-explanatory dialogue. Some may hate this method - particularly if you are fond of Hollywood's often dumbed-down approach to storytelling - but it is a simplistic style that lends itself particularly well to the material it covers. It allows the watcher to interpret many of the scenes and actions using their own logic and intelligence but guiding you with an overall framework so you don't completely get lost. Rather than a plethora of speeches and wasted chit-chat, Owen and the other actors seem to sum up everything in as few words as possible, and with just the right looks.

Which brings me to the rest of the cast. Almost perfectly chosen - bar one notable exception - the cast is polarised by Owen's Will Graham at one end as the anti-hero, and the creepy Malcolm McDowell at the other end as the villain. Sure there are plenty of other 'villains' but McDowell is the one who, almost from the outset, we despise the most. And it's a part he has played in almost every single film he has ever made. He has always been an evil psycho, even when he started out in early films like A Clockwork Orange. His film history is remarkably similar to his U.S. equivalent, Dennis Hopper, who has similarly now been typecast in crazy villain roles. Luckily McDowell's role here is much more restrained than normal, focussing his evil and menace into a much less 'eccentric' character who is still capable of shocking violence. Then there's Jonathan Rhys-Meyers, who deserves mention for his portrayal of Will's younger brother - who has gone off the rails somewhat since Will left the reservation. And the ever great Ken Stott (who did his best work in the British TV series The Vice) as the new boss of London threatened by Will's return.

But the only other big name is Charlotte Rampling, and she is the one weak link in the otherwise great cast. She plays Will's ex-girlfriend, the love of his life. Now, I can see what they were trying to do - give him a relationship with an older, more intelligent, mature woman. But Rampling is about sixty now, and a little too old to play the role convincingly. Even five years earlier - around the time when she was first approached with the script - it may have worked, but she is just too old to be believable. Sorry. Frankly, I can understand why so many became confused over whether she was Will's mother. Anyway, it is only a slight slip in a nicely chosen British cast and it certainly doesn't spoil the solid production. And if you put together such a largely excellent cast - Clive Owen in the lead, give it a wondrously moody score - itself reminiscent of the Get Carter score, shoot it in the London underworld with a sensitively sparse script and stick an acclaimed director at the helm, what you get is an immersive, moody affair that may not appeal to everybody but should be seen to be appreciated.