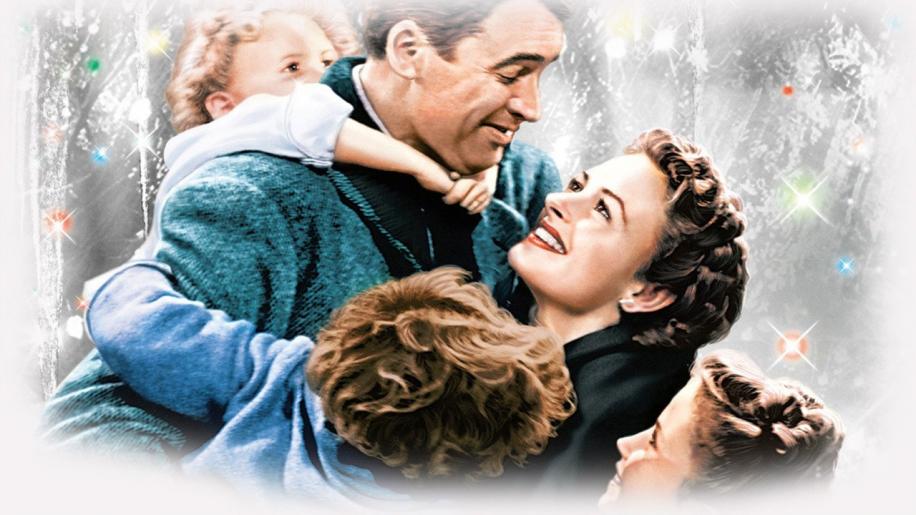 Well, let's not forget that this is an old film. However, that digitally re-mastered tag may lead you to think that you are in for a treat. Sadly, folks, that is not the case, I'm afraid. This transfer looks just like a poor NTSC vintage television broadcast, which I suppose is only apt considering that it was TV that saved the film from ignominy. But the image has some really niggling faults that must be addressed. I know that there is a THX-certified R1 version which is reputed to have a quite stunning picture, which makes the poor quality of this one all the more infuriating.

With a 1.33:1 aspect, the image presented here is terribly soft and mired with a bad contrast level that sees many close ups of faces - particularly of George and Mary - glaring up quite badly. Interiors can suffer further havoc with faces, costumes and furnishings all taking on a softly suffused hue that is anything but heavenly. The pivotal scene of George and Mary coming together as they both cradle the phone is painfully soft and vague. And yet there are other scenes in which the contrast is handled much better, such as when George leads the run on the bank, the high school dance or the desperate scenes set amid the snow flurries.

Despite this softening of the image and the tendency to glare-out, detail is surprisingly good in the fore and middle ground. The main street offers some nice rendering of the vehicles, trees and the store-fronts. Passers-by are well handled with plenty of costume detail revealed. Backgrounds, as can be expected, tend to lapse in quality, though.

Print damage is in evidence throughout but it is nowhere near as bad as you may think, the restoration job having removed all but the worst of the nicks and scratches. There is some occasional frame juddering but the nicest thing is lack of grain, which almost appears to have been air-brushed out of the picture. However, there is some terrible hazing on some costumes and patterned details - George's coat in several scenes suffers some woeful rainbow-filtering and glitching. This is actually quite disappointing and mars several sequences. Overall, I found the transfer to be lacking. You just don't get the impression that this has been treated to a grand clean-up. In the style of the image, the audio for the film is something of a let-down, as well. Again, the R1 has a THX-approved soundmix, but the Dolby Digital Mono track here is plagued with abundant hiss and crackle, a distinct lack of depth and range and low, tinny sound that does not do the film justice at all. Once again, you have to make allowances for the age of the material, but when there is supposed to be a much better version out there it is still a disappointment to hear the untreated pop and hum of this creaky old soundtrack.

Dialogue is always audible but it does seem to drift in volume quite a bit, so I would recommend turning up the sound a little right from the start. Background noise is prevalent through some key scenes but vanishes during many others. However, some of the effects, such as rainfall and breaking glass in the strange stone-throwing courtship between George and Mary are quite well handled.

So, not the best audio that could have been bestowed but, then again, I am listening out for things to complain about, aren't I? This Collector's Edition has two bonuses. The first is The Making Of It's A Wonderful Life (22.42 mins) hosted by gravel-voiced Tom Bosley (remember him from Charlie's Angels?) Produced and directed by Sandra Moiseeff, this little feature is actually pretty good value. Sure, it's a light and fluffy and Bosley's grandfatherly tones may have a tendency to soothe and lull, but there is a fair bit of fact and anecdote dished up and it does feel like some ground has been covered by the end. Starting from the film's infancy with the short story that inspired it and featuring some nice archival interviews with Frank Capra and Jimmy Stewart, the mini-doc takes in the script changes, casting choices (Vincent Price was once considered for the role of Mr. Potter) and the stern Production Code of the time that saw to it that words like “Jerk”, “Nuts” and “Impotent” were removed. Some things to look out for are the clumsiness of an inept stagehand that lent a cool audio gag for one scene and the bona-fide stone-throwing skills of Donna Reed. Not bad then, in the scheme of things.

The next little extra is quite satisfying too. Cited as being a Personal Introduction and Interview by Frank Capra Jnr, this 13.53 mins featurette avoids being whimsical or sentimental with the filmmaker's son providing a pretty straight chronicle and overview of his methods, motivations and the saga behind the film's production. Again, there are some old interviews with Capra and Stewart and the genesis behind the final script is given a nice examination with the three initial screenwriters that Capra first turned to, revealed to be Clifford Odets, Marc Connelly and, which surprised me, Spartacus-scribe Dalton Trumbo. It's a nice, but brief, little essay on his father's masterpiece. It's A Wonderful Life is still a wonderful film. I can't recall the first time that I saw it but the cosy feel that it generates has not dulled with age in the least. The home-grown, small-town feel-good vibe is very much in evidence, but I still find the darker edges of the tale the most rewarding. Frank Capra cornered the market with whimsical fare such as this, but the true magic of his films, especially this one, is hidden just that little bit deeper. A true classic.

Sadly, the AV transfer lets this version down. I wouldn't be so harsh on it if I didn't know that a better version existed. The age of the movie comes into consideration but the digital glitches certainly shouldn't be there. The extras are thin on the ground, but they are fact-filled, pleasant and respectful. Definitely a film worth adding to your collection, though this may not be the version to go for.