Double trouble is twice the fun... 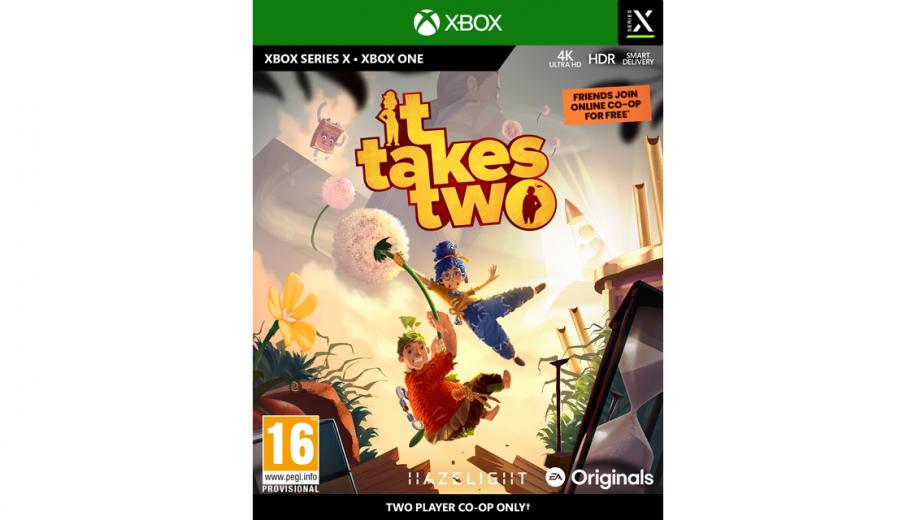 In our recent Little Nightmares II review, we mentioned how the platform genre has evolved with some style over the years – and in It Takes Two we’ve got yet another excellent example. Building on the success of their previous, and no less innovative, co-op titles, Brothers: A Tale of Two Sons and No Way Out, director Josef Fares and the Hazelight team have returned with another delightfully charming platform adventure. Once again, rather than simply twisting the single-player dynamic and dropping another player into the equation, It Takes Two is built from the ground-up for two players to work both independently and, most importantly, together – making it a very rare treat indeed. Teaming up with a friend, either via couch co-op or online, you play as May and Cody, an adult couple on the brink of divorce. When their daughter Rose issues an emotional cry for help to a magical book, the two are transported into the bodies of two small toy dolls and face a long trip back to reality through a now oversized and frequently fantastical world. The impending breakdown of a marriage might not be the cheeriest topic for a game with a cartoon vibe, especially if you’re planning on playing this with your kids, but there’s still a heart-warming tale in play, as May and Cody are forced to re-evaluate their day-to-day distractions, along with their love for each other.

For a game that’s strictly two-player – you can play it on your own with two controllers, but it can get incredibly tricky and is barely half the fun – perhaps the only downside is that there’s no online matchmaking. So, if you don’t have a friend ready and willing to jump into the action alongside you, then you could be left hanging. The very noteworthy upside is that It Takes Two comes with a free Friend’s Pass, meaning that anyone can effectively download the game at no cost to play with you – but it’s only compatible when connected with someone owning the full game (save for the first chapter, which doubles up as a free demo). There’s cross-generation gameplay (so Xbox One gamers can play with those on Xbox Series X, for example), but no cross-platform (so no Xbox/PlayStation collaborations). However, the Friend’s Pass certainly offers a slightly more encouraging invitation to find some co-op buddies – and once they’ve played the game for a decent amount of time they could well feel all the more inclined to pick up a full copy for themselves.

With co-op gameplay opening up the potential for multiple playing partners, It Takes Two makes the smart choice of mixing things up through each of its nine key chapters. While there are plenty of standard platforming traits on display – double jumps, air dashes, wall climbs, rail slides, grappling hooks and so on – your special abilities change from one chapter to the next. This means that rather than having to master several skills over the course of many hours, you instead have to get used to maximising new toys within each new location, so a new co-op partner won’t find themselves too far behind the curve when it comes to the basic gameplay mechanics if they join in on a later level. This is also helped by a very generous respawn feature that drops you back into the game within a few seconds and never far from the action. It’s handy because it can be very easy to die, sometimes because it’s treated with a degree of silliness (early on you can jab a metal pin into a plug socket or walk into a very obvious saw blade), but more often because it can be a little too easy to miss some jumps and plunge into the abyss below – but even if you both die during a boss fight, the punishment is usually only a very minor inconvenience, so both you and any fleeting rookie companions won’t feel too troubled by any learning processes.

The best part of this set up is that May and Cody will each be given a different ability for each chapter, and one that will need to be used in co-operation with their partner. For example, early on Cody will be able to throw nails into walls to provide grapple spots that May, armed with a hammer head, can use to jump across large gaps. In the next chapter this changes to a sap-firing gun that Cody can use to ‘paint’ enemies for May to explode with her laser-like drill (the sap also adds extra weight to objects as one of many physics-based puzzle solutions). By the end of the game the couple will have got to grips with anti-gravity boots, shrink rays, cloning tools, time control, giant magnets and the ability to transform into a gun-toting flower. Yes, really. The result is that while both players are free to run around and do their own thing, this is always limited by scripted triggers in your surroundings that dictate where and when you’ll need to work together. It could be something as simple as one player jumping on a switch or opening a door on one path so the other can make progress on another, or it could involve combining your special abilities or some other consistently creative solutions, but it rarely gets overly complicated – though not always immediately obvious.

Indeed, most of the puzzle elements are fairly logical and relatively straightforward. The real trick, and arguably the greatest feature that makes It Takes Two stand out from its counterparts, is that you’ll need both players to see the same solution at the same time and unite in synchronicity accordingly (timing jumps and activating switches etc) – which is often easier said than done. Hooking up a mic and maintaining good communication is very much a key part of the process and can enliven the gameplay experience with plenty of verbal high-fives. This ongoing sense of variety and ever-changing game dynamics is also tied into the game’s backdrops, which take you from the tool shed, through a huge tree (taking in a war between squirrels and wasps, as you do), into the family home and out into the garden. As palm-sized dolls, these ‘normal’ settings are transformed into vast over-sized landscapes that are re-imagined with a fantastical twist (again, not unlike what we saw with Little Nightmares II) that turn’s a child’s bedroom into a genuine 3D playground. The path through the game is relatively linear but there’s plenty of scope for off-route exploration. Indeed, it’s very much encouraged.

Although some can be found in clear sight, there are a wealth of minigames and other assorted Easter Eggs stashed away within the game world. The 25 minigames on offer are quick head-to-head showdowns, mostly modelled on old games or simple twists on basic mechanics, and can be ignored or revelled in, depending on your preference. If you’re up against a notably competitive friend, then they can prove a fun and very time-sapping distraction! Also of huge credit to the game is that a large number of achievements/trophies and other fun discoveries are awarded for finding or interacting with objects just off that main path to further encourage a little more ‘play’ time in these wonderfully constructed playgrounds (the No Way Out lead characters re-imagined as bickering figurines is just one example). Tracking everything down certainly adds to the replay value, along with playing through each chapter as both characters and their varying abilities, then again with a number of different co-op buddies – and with a comfortable 10+ hours of gameplay for a single playthrough (and a chapter select option for easy dip-in, dip-out reruns or minigame shootouts), there can be few complaints about being short-changed.

The constant creativity and ongoing re-invention is reflected in the visuals, with a beautifully varied palette seen in both the locations and the game’s design. The new-gen versions can boast 4K UHD with up to 60fps flowing almost seamlessly, with only some of the more extravagant particle effects risking any kind of framerate drop-off. Even running on the ‘old’ Xbox One at 1080p, It Takes Two still looks great, combining its hybrid of real-world authenticity and dreamscape fantasy with aplomb. The game also does a fabulous job in mixing up its 3D arena with some 2D elements and other wonderfully creative twists (such as flying a plane made from Cody’s underwear or taking down a giant teddy in a UFO) – none of which take you too far out of your comfort zone, or for too long. The only real issue is that there can be a few dark corners that can distort your vision, and the largely flexible camera can also become a touch restricted on a few occasions, making missed jumps or unseen holes in the floor that little bit easier to fall through. However, given the minimal hindrance to your navigation caused by dying, it’s not exactly a taxing trial-and-error process.

For a game with co-operation at its absolute heart, good communication is obviously key – and so if you’re not sharing a room with your playing partner, then a good headset can definitely go a long way, whether that’s for trading vital tactics or just revelling in some in-game banter over a minigame. PC owners are encouraged by the devs to consider using Discord, for example, but the majority of headsets will do a fine job – and also for the rest of the game’s audio, with spatial sound effects nicely amplified, though it’s not really a key facet of the overall experience.

With some great sound effects backed by a nicely understated, yet effectively immersive score (you might want to up the music volume in the menus to enhance the effect – or not), there’s a very impressive audio performance at play, including some decent voiceover performances. Although the Latina charms of the in-game help, Dr Hakim (aka The Book of Love), might be considered ‘Marmite’ at best… We thought he was great but also hated him in equal measure. By offering a genuine and constantly rewarding co-operative experience, It Take Two delivers an action-adventure title unlike precious few others on the market. Best of all, it delivers a constant level of creativity and variety that really makes it stand out against the majority of your everyday platform games on the market and should be seen pretty much a must-play for fans of the genre – just so long as you can find someone to enjoy it with.

It does perhaps risk a small divide, where the gameplay and art style might hint towards a younger market, while the storyline and PEGI 12 rating would suggest otherwise – and you can be sure even the devs are aware that the co-op focus won’t scratch everyone’s gaming itch. But if you’ve even a passing interest in a charming, fun and hugely satisfying platform-based adventure that you can share with friends or a partner, then It Takes Two is definitely worth teaming up for.