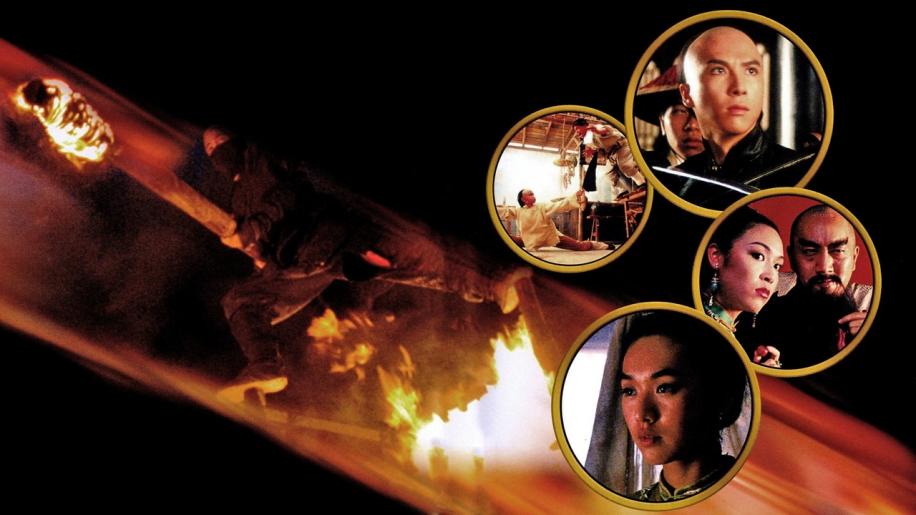 Long before his name gained flavour of the month cache status in Hollywood circles for choreographing the fight sequences in The Matrix, Yuen Woo-ping had already established himself as one of the pre-eminent directors of kung fu movies in the Hong Kongfilm industry. Right from the moment his debut film, the Jackie Chan starring Snake in the Eagle’s Shadow, created a wave that rippled across the Atlantic back in 1978 he has remained a pillar of kung fu cinema. As with all great Chinese martial arts film helmsmen, he has also tried his hand at bringing together both action elements and that staple of the genre, the Chinese folk hero Wong Fei-hung. Having already acted as the action director for another Fei-hung title, Last hero in China,to be released the same year, Woo-ping made a slightly different, prequel-esque take on the legend of what some see as the semi-mythical epitome of the indomitable Chinese spirit.

Iron Monkey features Wong Fei-hung but it is by no means about the kung fu colossus. The protagonist is, unsurprisingly, a figure known as Iron Monkey – a daredevil martial artist who represents the ideals of a Robin Hood figure, stealing from the rich and giving to the poor. Thankfully in amongst this good spirited altruism he also gets to bash a few heads together. It is the end of the Qing Dynasty and the Zhejiang province has become inundated with refugees and the poor, fleeing the flooding of outlying areas and the spread of disease. As ever, where there are large amounts of people in need there are those who would seek to profit from the misfortune of others, and the local officials, unable to keep in check their avaricious natures, exploit the downtrodden.

Into this mix steps the masked protector of the weak and innocent, Iron Monkey. He leaps across rooftops, infiltrates the strongholds of the authorities, relieves them of their monies and drops off pouches of gold and silver to those most in need, all the while remaining anonymous and in the shadows – if anyone needs to be conversed with or reprimanded, he throws objects from the shadows or deposits notes, emblazoned with a cartoonish monkey, to show his displeasure. It’s all good light-hearted fun mixed in with some playground moralising and top choreography, pretty much just as one would expect if they read the description of Robin Hood in period China directed by Yuen Woo-ping.

As with all folk heroes hiding behind anonymity, it isn’t long before Iron Monkey’s identity is established and it’s every bit as generically pious as it could get, he is Dr Yang (played by Yu Rongguang), a kind hearted physician who treats the poor for free and charges the rich what they can obviously afford to pay. He is assisted in his duties by Miss Ho - another lost soul he has saved - who distributes the herbal remedies and also gets in on a bit of the chop socky action later on as well. The twist, and what raises Iron Monkey above many other period tales of kung-fu from the early nineties, is the introduction of Donnie Yen. Yen plays Wong Kei-ying, a man who strides into town with his young son, a certain Wong Fei-hung (played by a young female actress Angie Tsang, whose skills with the staff would later gain her a Gold medal in the World Wushu Championships), in tow. After a bit of fisticuffs with a few street ruffians both are arrested due to the over zealous town guards who, under the orders of the corrupt governor, are arresting anyone who has any vague connections to either monkeys or kung fu in their efforts to find the wanted outlaw.

This early introduction helps bring about two very positive results, the first being Yen’s very presence. It’s always surprising that Yu Rongguang didn’t rise to greater heights, as he proves more than adept here, but when put alongside one of the most naturally gifted martial arts actors of his generation, it is perhaps understandable why Yen’s star shone so brightly as to overshadow others alongside him. The second by-product is the intentional shift to a secondary layer of the narrative, namely the quasi Karate Kid nature of the tale of the young Wong Fei-hung, as he learns more about his own fighting abilities as well as the relationship dynamic with his father and how that moulded the man he would become.

Yuen Woo-ping never allows this nod to the audience and their doubtless tastes for the fictionalisation and myths surrounding Wong Fei-hung to obstruct the central story, but it is hard to witness the sublimely tight fight choreography of Yen’s opening altercation with a group of street toughs whilst utilising his umbrella as a weapon and not be impressed and a little intrigued by this shift towards the more iconic figure. The limber and athletic Angie Tsang proves more than capable of representing the talents of a young legend in the making and with her inclusion we benefit from the now three characters we can follow, all of whom are proficient at displaying Woo-ping’s action direction to a tee.

The twist, though it really doesn’t remain a real plot point, is that Wong Kei-ying finds his son imprisoned until he catches Iron monkey himself, forcing him to hunt a man that the locals have come to regards as a hero. It’s not the greatest moral dilemma, as the teaming up of the pair is hardly going to come as a shock, particularly once kindness is shown by the good Dr to his son and more nefarious characters begin appearing in town. The beauty of this telegraphed switch is that throughout the course of the film we get to see three very different martial arts performances, the cat-and-mouse of Wong Kei-ying and Iron Monkey, the young budding kung fu hero of Wong-Fei-hung and finally a pairing of Yen and Rongguang against a greater foe. All the hallmarks of knowing martial arts cinema are put on display, from the comic turns of slapstick and impersonations that include hairy moles, to the numerous stances shouted during fight sequences. The wirework is almost a template of how to incorporate it effectively without moving into flight territory and the shift to more intricate, bloody and weapons based fights as the film progresses is perfectly timed.

Part Eastern Robin Hood, part unofficial prequel to every great Wong Fei-hung film you’ve ever seen, Iron Monkey is pure escapism, often light in tone but with enough sting in its tail to keep it gripping – it has been given the benefit of something of a reappraisal thanks to Tarantino in recent years, but fans knew all along that this was a classic slice of kung fu action from the master Yuen Woo-ping.