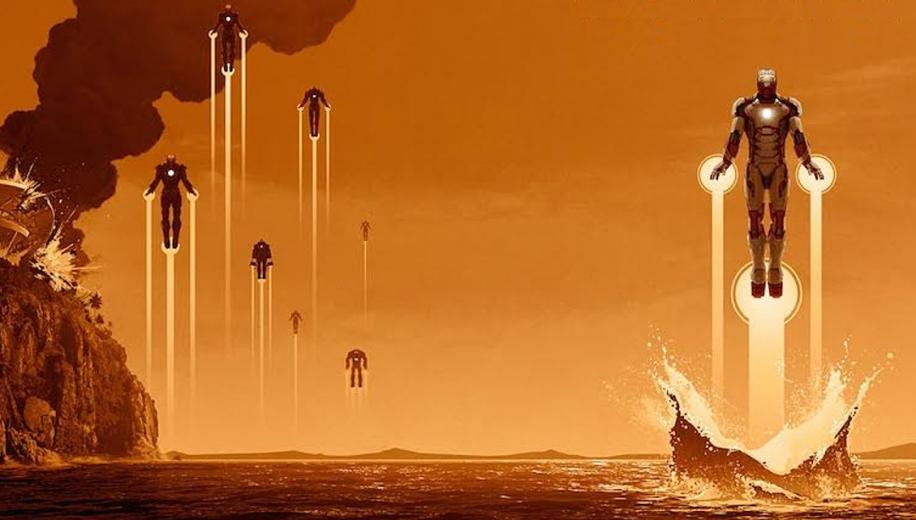 The first linchpin franchise within the grander MCU gets divisive but arguably definitive treatment in Iron Man 3 courtesy of underappreciated writer/director Shane Black.

After the production of Iron Man 2 went off the rails, director Jon Favreau - who was initially tipped for a trilogy - was replaced by his sometimes writing collaborator Shane Black, making his blockbuster debut here. Working from Warren Ellis' great Extremis comic story (which was also used for the first film), although still maintaining some Demon in a Bottle nods, the end result was ultimately more Shane Black than anything else. Internal monologues. Christmas. Helicopter attacks. Down-on-his-luck hero forced to get back-to-basics. Unlikely bantering partners. Torture sequence. And, above all else, a strikingly witty script driven by excellent repartee and sharp one-liners. If you don't appreciate Shane Black features then none of this will mean anything; if you do, Iron Man 3 all adds up to arguably the best Iron Man outing.
Downey Jr. and Black had already worked together to great effect in the latter's directorial debut, Kiss Kiss Bang Bang, and, despite Stark being such an already well-established character, the two manage to still bring some depth to the role. The hints of PTSD are injected organically into the narrative, and the character arc is easily the most significant since the first entry. Sure, both Guy Pearce and Ben Kingsley disappoint in their own separate ways (the twist involving the latter was always going to frustrate fans, but the reveal of the former doesn't really fill the void) but the Extremis assassins have a suitably menacing T-1000 vibe about them. And, sure, the messy epic battle at the end goes OTT in a dictated-by-Marvel kind of way, but there's still plenty of excellent small-scale moments for Black and Downey Jr. to trade in.

The first in the trilogy to be shot digitally, the 2.8K digital source format has, as with the others, been cut short by a 2K digital intermediate. Nevertheless, the digitally-shot work inherently lends itself well to the UHD format, with detail levels at an all-time high, offering up strong clarity and impressive resolution irrespective of the lack of native 4K content. The superior skin textures and fine object observation which were already evident on the Blu-ray release feel somewhat tweaked here and arguably look better than ever, even if the distinction in resolution is still far from definitive on the format.

Where the Blu-ray already looked outstanding, the real upgrade on Ultra HD Blu-ray comes in the use of High Dynamic Range (HDR) and Wide Colour Gamut (WCG), which, on this third Iron Man release, is far more consistent and, consequently, much more impressive. Everything from the Extremis glow to the various Iron Man suits, to Stark's power core heart shows up highlighted and rich with vivid colour. The HDR application leaves the darker sequences standing out too - and, since it's a Shane Black film, there are far more than in the previous two film. Nevertheless blacks aren't quite as deep as they could be, although they're far better than on the UHDs of either of the previous two movies. It's possible that an official Disney/Marvel release of Iron Man 3 on the format could utilise a new master, and potentially even better HDR and WCG given their access to high spec equipment, but it's also possible that Iron Man 3 may not end up looking much better than it does here, and, thankfully, that's not the end of the world as it's pretty impressive.

The accompanying DTS-HD Master Audio 7.1 track has no such reservations about it. This is blockbuster bombast at it's best: unafraid of engulfing you with a volley of furious sonic elements but, at the same time, prepared to go above and beyond to show up the distinct shape and eminent precision of the expertly-crafted soundscape. Dialogue - perhaps more important than in any of the other MCU productions - is promoted clearly and coherently throughout the piece, able to rise above even during the height of the maelstrom, and take control of the frontal array. The score too knows just when to engage and when to supplant, mirroring the rollercoaster events with unbridled conviction.


Demo and reference quality through and through

The surrounds and LFE are given plenty to do but it's the effects that will stun and startle, shock and awe; explosions shaking your seat, gunfire rattling your cage, repulsors cutting to your core as the Iron Man suits thrums and thrusts to life, facing of against the teeming intensity of the Extremis-infused villains. The frontal array will pin you to your seat, the surrounds will make your head spin with the pinpoint precision and stunning dynamics, and the rears will constantly make out wonder whether your house is being subject to a Special Forces assault - with choppers - or whether it's just a film you've got on too loud. This is what blockbuster movies were made for and, once again, it falls to an Iron Man instalment to push the envelope and reset the benchmark. Demo and reference quality through and through, this is aural perfection.

The old Blu-ray extras are helpfully ported onto the Concorde Ultra HD Blu-ray disc itself, retaining the high standards of the other releases in the Iron Man trilogy, with a great little Commentary from Shane Black (and co-writer Drew Pearce), a superb Marvel One Shot: Agent Carter, which paved the way for the nice little spin-off series, a couple of short Featurettes, a quarter-hour of Deleted Scenes, a Gag Reel and some Trailers.

With Iron Man 3, Shane Black lets us get to know this core character once again, reminding us why we fell in love with him in the first place; why he was the reason that we were prepared to actually invest in the arduous six-film trek that was Phase 1; why Robert Downey Jr.’s Iron Man was the reason Avengers even exists, and perhaps even the entire MCU.

While we wait patiently for the Disney/Marvel monolith to get on board the Ultra HD Blu-ray bandwagon, German manufacturing studio Concorde jump the gun to deliver their own 4K takes on the trilogy. The results are flawed at best, with the first movie, in particular, standing out like a sore thumb, whilst the second offered a far more satisfying upgrade. This third release ups the game yet further for what is the kind of release that the first two should have been. Those who buy the Steelbook Trilogy release may still hold on to it for the sequels more than the first film, and should certainly be tempted by the standalone release of the third.