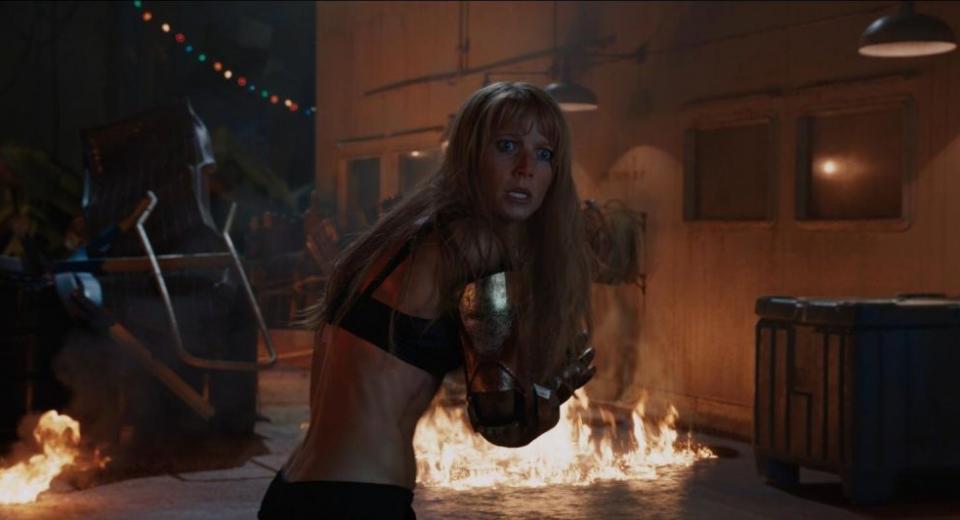 Certainly the best Iron Man movie and the best Marvel movie - and arguably better even than Joss Whedon's impressive, unprecedented, ensemble superhero blockbuster Avengers - writer/director Shane Black knocked it out of the park with this stunning opening Phase 2 chapter in the Marvel Cinematic Universe. Cementing the fact that "bigger" seldom guarantees "better" in terms of sequels, Black reminds the Studios of the importance of getting a good, dedicated filmmaker on board; somebody who actually cares about character development; emotional investment and delivering what audiences really want in terms of action with impact.

Iron Man 3 hits UK shores with a Region Free Blu-ray a couple of weeks ahead of our American counterparts, with an expectedly stunning 1080p High Definition video presentation in its original theatrical aspect ratio of 2.4:1 widescreen. Although – as you would only expect from a Shane Black flick – steeped in shadows and night-set sequences, the transfer handles them expertly, without ever dipping into crush territory, and with no signs of aberrant noise. Detail is excellent, with superior skin textures and fine object observation, and impressive colour reproduction. Effects sequences are seamlessly blended in, even with the rather extreme Extremis powers, and overall it is another reference-standard presentation. Perhaps it’s easy to take it for granted after the previous features have proven essentially benchmark releases on the format, but it’s still something of a relief that Iron Man 3 doesn’t buck the trend.

Of course this is the 3D release, which boasts not only the immaculate 2D video presentation, that would easily earn a 9 or even 10/10, but also the far more suspect 3D alternative. Suspicions are always raised when a film isn’t natively shot in 3D, and has some kind of 3D post-conversion; experience tells us as much, but some expensive conversions do reasonable jobs, with the likes of Avengers itself proving to be fairly immersive despite being converted. Still, Avengers was not without issues, and one of its biggest issues – aside from not being natively shot in 3D – is the same one which is even more prevalent on Iron Man 3: they both feature numerous dark sequences. As you may have guessed from the fact that most 3D films have to have their contrast boosted specifically to overcome this kind of problem, darker sequences are never handled all that well by the format, and Iron Man 3 is no exception, with many of the night-set sequences boasting murky shots and basically next to no dimensionality. Effects shots spark up interest within these moments – whether Extremis powers or Tony’s suit – but, for the most part, there’s little difference between the 3D and 2D here, other than it’s even darker.

Thankfully there are still plenty of daylight sequences: from the stunning aerial assault, where rockets visibility penetrate into the depth of your screen, and where debris has tangible solidity to it; to the spectacular aerial rescue sequence, where one of the biggest plus points – the HUD graphics – offers almost consistent 3D framing. Characters are far from 2D cutouts, and there are enough pleasing touches and effective 3D uses to make this an engaging, often immersive experience. Between that and the stunning, near-perfect 2D presentation, the video score still averages out at a respectable 8/10.

The accompanying dts-HD Master Audio 7.1 track has no such reservations about it. This is blockbuster bombast at it's best: unafraid of engulfing you with a volley of furious sonic elements but, at the same time, prepared to go above and beyond to show up the distinct shape and eminent precision of the expertly-crafted soundscape. Dialogue - perhaps more important than in any of the other MCU productions - is promoted clearly and coherently throughout the piece, able to rise above even during the height of the maelstrom, and take control of the frontal array. The score too knows just when to engage and when to supplant, mirroring the rollercoaster events with unbridled conviction.

Indeed, it alone gives the surrounds and LFE something to do. But it's the effects that will stun and startle, shock and awe; explosions shaking your seat, gunfire rattling your cage, repulsors cutting to your core as the Iron Man suits thrums and thrusts to life, facing of against the teeming intensity of the Extremis-infused villains. The frontal array will pin you to your set, the surrounds will make your head spin with the pinpoint precision and stunning dynamics, and the rears will constantly make out wonder whether your house is being subject to a Special Forces assault - with choppers - or whether it's just a film you've got on too loud. This is what blockbuster movies were made for and, once again, it falls to an Iron Man instalment to push the envelope and reset the benchmark. Demo and reference quality through and through, this is aural perfection.

Internet rumours about missing, held-back content with respect to this release are probably true, this is definitely a Documentary and a few Featurettes' short of what must have been produced for the film. I can't imagine there's going to be a double-dip, but stacking them up ready for the MCU: Phase 2 set is a fair assumption. The reality is that there's not too much lacking, however, with the excellent Director's Commentary and entertaining extra footage - including a superb little Short Film - easily making this amidst the better-value content offered on an MCU release; there may not be the quantity but they make up for it in quality.

Audio Commentary
Audio Commentary with Writer/Director Shane Black and co-writer Drew Pearce is an excellent place to start; an honest, informative and in-depth look not only into the production, but also looking into the characters and themes which, if you hadn't already realised, were clearly of paramount importance to Black. It's friendly, fast-paced and sparking with trademark Black wit, and, alongside the Cruise/Kozinski track for Oblivion, probably the best Commentary I've come across this year.

Marvel One-Shot Short Film
Agent Carter is one of the best shorts ever attached to a MCU release, focusing on Captain American's WWII femme, Peggy Carter (Hayley Atwell) as she goes on a daring unsanctioned one-woman mission. Packed with action, intrigue and some noteworthy cameos (Dominic Cooper reprises his role briefly as Howard Stark and West Wing's Bradley Whitford makes an appearance), it's very entertaining, an even comes with it's own post-credits snippet! It's no wonder that Atwell is getting her own Agent Carter TV series.

Featurettes
Iron Man 3 Unmasked spends 11 minutes looking behind the scenes at the production and, although packed with interesting information and background titbits, it serves more as an introduction to a full Documentary, rather than a comprehensive offering in and of itself.

Deconstructing the Scene: Attack on Air Force One offers up a 9-minute look specifically at this one stunt. Although you might scratch you heads wondering why they picked this one and not, say, the helicopter assault, or the final confrontation, but it becomes clear when you watch the Featurette - it includes a surprising amount of practical stuntwork. With help from the Red Bull skydiving team they pulled of a great deal of nice skydiving stuntwork, more than the final film would have you believe. Well worth checking out.

Additional Footage
Deleted and Extended Scenes total a quarter-of-an-hour of extra material (including Outtakes), most of which is pretty average, but some of which is worth the trawl.

Gag Reel will have you sporadically laughing at the antics of Downey Jr, Paltrow and Cheadle on set, with Downey Jr leading the way in a 5-minute series of comical goofs.

The disc is rounded off by a series of Trailers, including an exclusive look at the upcoming Thor 2.

Iron Man 3 trumps Avengers; Shane Black bests Whedon.
Phase 2 of Marvel's unstoppable Avengers juggernaut kick-starts in much the same way as Phase 1 did: with a spectacular Iron Man movie. If you wondered where they'd go after the grandstanding ensemble epic fun of Avengers then worry no more; they went straight to Shane "Lethal Weapon" Black's doorstep. It's the only way you could have possibly topped Whedon, and Black delivers exactly what you'd expect from him; a popcorn superhero (pre-)Summer blockbuster action movie, only with heart and soul; characters you care about; snappy, memorable dialogue; and action driven by a story rather than the other way around. It's not just the best Iron Man movie, it's the best Marvel superhero vehicle we've seen so far, and it sets the bar pretty high for the rest of Phase 2. Highly recommended.

The 3D release comes with perfect, reference-quality 2D presentation and workable, good but not great 3D, as well as outstanding audio that'll blow you away. It feels like something is missing from the Extras - perhaps a decent Documentary - but the Commentary and Short Film more than make up for it and will keep a smile on your face long after the film closes. Well worth picking up and adding to your MCU collection, I doubt many will be able to wait for the MCU Phase 2 Box Set for this particular bit of excellence. Highly Recommended.