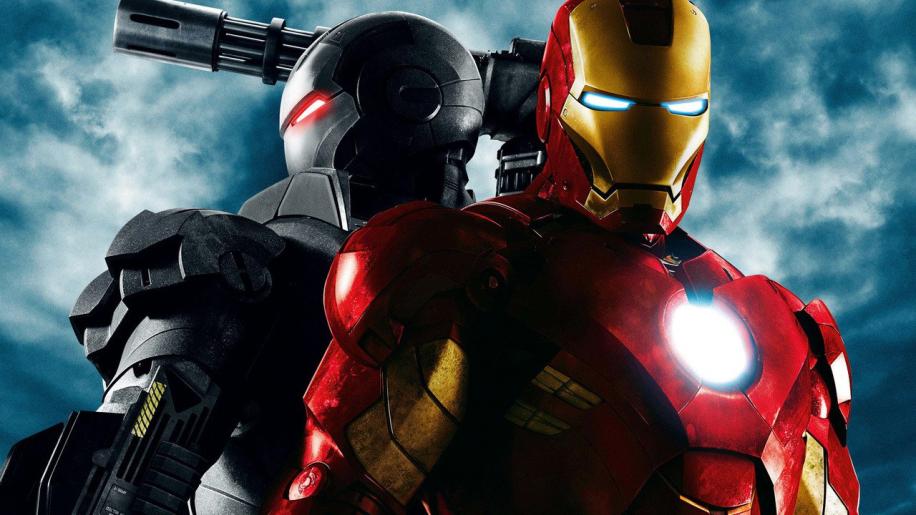 The long awaited sequel to ‘Iron Man’ blasts, crunches and thuds its way on to USA Region free Blu-ray. The first film that set the scene, broke the mould for superhero type movies in that it was involving and had links to every day reality before moving into the realms of fairly credible fantasy. It was a big blockbuster – big in every sense. It was loud, making great use of surround sound to immerse the audience in the action. It also had one larger than life property – Robert Downey Jr – who brought to the character of Tony Stark an off the wall, quirky sense of humour that made us like a super rich, armaments manufacturing playboy.
The superhero genre had fallen into a rut after a succession of predictable, formula driven productions but here was something fresh. Could this freshness be carried over into a sequel or would it have passed its sell by date?

‘Iron Man 2’ is fortunate enough to have largely the same cast as the first picture, so it starts off on solid foundations. Robert Downey Jr is back as Tony Stark/Iron Man bringing with him a screen presence and magnetism that seems quite rare these days. We all know that the audience is waiting for the scenes where Iron Man starts kicking some butt, while in the quieter moments you really need an actor of Downey Jr’s skill to keep all eyes on the screen.
Back too is Gwyneth Paltrow as Stark’s assistant Pepper Potts and there’s the coyness of a relationship that neither will admit to having – played well by both stars.
Adding to the strong cast we have Mickey Rourke - whose career has risen like a Phoenix from the ashes in recent years – who plays the hard bitten Russian, Ivan Vanko, who becomes a technological threat thanks to the efforts of his father who co-designed the Arc Reactor together with Tony Stark’s father. Rourke has a great muscular look here that epitomises the poor kid out to get the rich kid.
Also joining the cast is Sam Rockwell (so good in ‘Moon’) as slimy armaments manufacturer Justin Hammer, who wants to capitalise on the Iron Man tech.
Samuel L Jackson is his usual cool self as director Fury of the S.H.I.E.L.D. organisation and this time he brings along Scarlett Johansson as super sexy agent Natalie Rushman (aka Natasha Romanoff aka The Black Widow).

But enough of the cast, what’s the plot this time round?
After an introduction to Ivan Vanko (Rourke), we have a very showbiz opening as Iron Man makes an impressive arrival on stage among dancing girls at the Stark Expo – a kind of ‘World’s Fair’ dreamt up by Howard Stark and now a reality thanks to his son.
But Tony Stark (Downey Jr) also has his own problems. The Military want to get their sticky mitts on the ‘Iron Man weapon’ which Stark believes to be the reason for World Peace and he has to tolerate a Howard Hughes type Congress grilling as he refuses to hand it over. Look out for Gary Shandling as the Senator who wants the suit. Not only does he have this to contend with, but also the piece of hardware in his chest that is keeping him alive is slowly killing him thanks to the toxicity of the Paladium used in its construction. A painful looking rash is gradually spreading over his chest, but he feels he can’t admit to anyone that he is dying. At a Formula 1 type race on the Monaco circuit in which Stark is competing, his Russian nemesis ‘Whiplash’ (Rourke) makes his first appearance – taking on Iron Man in a spectacular, explosive battle.
So who’s going to get Stark first? The Military, Ivan Vanko or the Duracell battery in his chest?
Will world peace be shattered? Will the crazed Russian prove to have better tech than Iron Man? Is Tony Stark smart enough to save himself?
You’re gonna have to watch the movie to find out!

Sitting through a screening of ‘Iron Man 2’ is no chore at all. It’s thoroughly entertaining as you feel involved thanks to the good script and Downey Jr’s performance as well as the multitude of effects that rival the very best firework display. The effects are not there simply for effects sake, they are carefully integrated into the plot. The plot itself, while not exactly challenging, is revealed in a manner that does not leave you feeling as if you’ve had your intelligence insulted.
Also, for the 124 minutes run time you inhabit the glamorous world of a billionaire with all his toys and the latest Audi convertible sportscar. You are taken to Monaco, the playground of the rich and famous. Moreover, there’s high tech action that easily beats the pants off ‘Transformers’.

Director Jon Favreau makes the whole affair move along at a healthy pace. The action scenes are fast moving with quick cutting to heighten the speed of events, but he has the sense to know that an entire movie can’t be like a long music video so he slows things down in order to fill us in on key plot lines. All the same, there’s always something of interest going on in these scenes to ensure that he does not lose our attention.
Keep an eye out for Mr Favreau as Stark’s sparring partner in the ring sequence. He eventually gets an ass whupping (notice how I’m picking up on the American lingo here) from Scarlett Johansson, but he probably had that scene specially written into the script.

Without giving away too much of the story, the biggest set piece in the movie has Iron Man pitted against a high tech robot army that’s akin to the odds against Bruce Lee when he took on about 150 opponents in 'Enter the Dragon'. This sequence does make you wonder if he’s going to win in the good old ‘Will he, won’t he?’ fashion of some of the best Hollywood hero films going back to the days of Douglas Fairbanks Jr.

‘Iron Man 2’ is first class entertainment in the blockbuster style. It’s spectacular, it’s fun and I hope the series continues to build upon the first two movies, remembering what made them different from the run of the mill superhero flicks.