One drunken dust-off too many 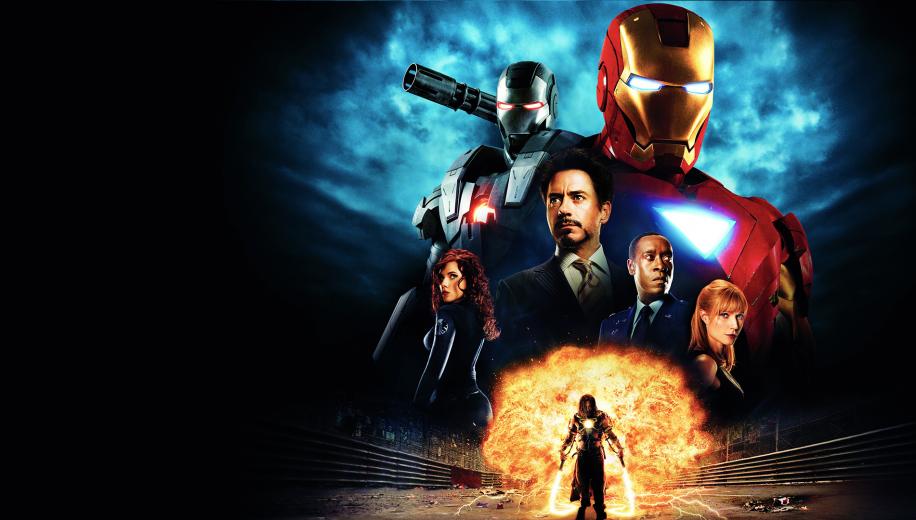 Iron Man's follow-up was marred by a director's compromised vision, offering glimpses of excellence in an otherwise bloated, studio-driven sequel.

With returning director Jon Favreau - fresh from having absolutely nailed the first entry in the MCU, without which we'd arguably have never reached Endgame - having his eyes set on a trilogy that incorporated elements of the tremendous Demon in a Bottle alcoholism story arc from the comic books, and with writer/director Shane Black on hand to help, making Iron Man 2 should have been a walk in the park. The first one was a massive critical and commercial success, and surely Downey Jr.'s reckless rockstar Tony Stark could make any sequel work?

Unfortunately, despite committed supporting performances from the likes of Mickey Rourke (coming off the back of his critical success in The Wrestler) and Sam Rockwell, as well as Don Cheadle's War Machine (infamously but also effortlessly replacing Terrence Howard's Colonel Rhodes) along with the introduction of Scarlett Johansson's now-beloved Black Widow, behind the scenes, there were clearly too many chefs in the kitchen.


There were clearly too many chefs in the kitchen

Reportedly, Favreau was put under considerable pressure to turn in a specific end product, leaving some of the nuances and character details on the cutting room floor (Rourke's well-researched Russian antagonist was little more than a pantomime villain come the final act, and Stark's Demon in a Bottle thread was reduced to little more than a pathetic, drunken dust-off between Iron Man and War Machine in the middle of a party). The ideas are there - the tech keeping Stark alive was also slowly killing him, and the key to saving his own life tied back to a distant relationship with his father; the villain was the son of a man who reportedly worked with Stark's father and blamed the Stark name for everything that happened to him as a result - but stitched together in a way that simply does not do them justice. For such a committed performance from Rourke, it's shocking that his villain and Stark share one of the best scenes in the entire movie, both in terms of action and dialogue - running from the Monaco racetrack to the "If you could make God bleed, people would cease to believe in Him" coda - and yet this is basically their only scene together in the entire film.

There are still some great setpieces like this, but the war profiteering / drone army themes are underdeveloped, Rockwell's Justin Hammer is utterly superfluous (and a waste of the character), and even Black Widow appears largely redundant eye candy. In amidst all of this are nice touches and, once again, a great Stark/Iron Man from Downey Jr, who somehow holds it all together by simply owning the role, but you can't help but think that it could and should have been considerably better.

Iron Man 2 comes to UK Ultra HD Blu-ray courtesy of Disney, marrying up to their identical US release. As with the first film, it was shot on 35mm film, and ostensibly limited by a 2K Digital Intermediate, but nevertheless the end result is largely impressive.


Sitting comfortably alongside the new 4K release of the first film, this is a mostly commendable presentation, so long as you're on board with the stylistic choices

For a quick gauge on how things are going to go with Disney's new Iron Man 2 4K presentation, you only have to look back at what they did with the first movie's official 4K UHD bow, reviewed extensively here. It is pretty-much the same scenario - DNR has been liberally applied to give the naturally grainy film a cleaner digital look in-line with the later digitally-shot MCU entries; no, it's not the end of the world because sharpening tools haven't ruined the detail that has been pulled through; and, yes, ultimately HDR and WCG absolutely save the day.

This isn't even a Terminator 2 4K situation either, with the application of DNR somehow just enough to clean up the image whilst also not so much that it smoothes away some of the natural underlying texture. Is it perfect? No, infrequent frozen grain can still be spotted, normally on skylines and around the edges, but you mostly have to be looking for it. And ultimately, those who appreciate films to look the way they were shot - particularly in terms of natural grain on a shot-on-film production - will be disappointed. But it's a hell of a job keeping in mind the desire to marry this film up with the digital look that defined Phases 2 and 3; it's about the best you could imagine under the circumstances.

Again, whatever your feelings about the DNR situation, HDR and WCG are superbly implemented, rendering deep and inky blacks, bringing the signature Iron Man glow to life in darker sequences, pulling detail from shadows, adding texture to brighter outfits and settings (Monaco is stunning, complete with Whiplash's neon slashes and plenty of fiery explosions) and balancing colour tones and vibrant, vivid highlights much more precisely than the earlier German 4K Ultra HD Blu-ray with its blanket-level application of far-too-hot skin tones. Sitting comfortably alongside the new 4K release of the first film - although perhaps not quite as impressive as that in its balancing act of faux digital clean-up - this is a mostly commendable presentation, so long as you're on board with the stylistic choices.

As with the first film, Iron Man 2 has alway enjoyed a hefty aural presence, even without the benefits of immersive audio. Thankfully, this latest 4K package only enhances the already demo audio with a 3D High Definition object-based audio track in the form of Dolby Atmos.

Whilst dialogue remains keenly prioritised throughout the piece, largely front-dominated except perhaps for the in-suit dialogue, crowds, racetrack commentary and so forth (the bookending expo scenes widen this stage usage). Effects coverage is exemplary, crafting fully immersive setpieces, whether on the racetrack - with cars whizzing across your living room - or the multiple drone sequences, with the finale an absolutely blazing example of demo audio. And there's plenty of heavyweight impact too - those drones each make a wonderfully satisfying thud when landing, War Machine has a much heavier sound to his movements, and the explosive detonations rock the stage and threaten to get you even more complaints after the neighbours have just about gotten over Iron Man played at reference levels.

The score is arguably the best of all three Iron Man outings, and a defining one for the character and, indeed, the MCU, with plenty of heavy metal fury getting wonderful expansive airplay across the array and carrying with it plenty of that LFE thunder too. Easy demo material, it's a great track.

As expected, nothing on the 4K disc, but the Blu-ray has all the old extras - Commentary, Featurettes, Deleted Scenes, Music Video, Gallery and Trailers.

Iron Man 2 remains one of the weaker MCU entries, but it's a series of films which works so wonderfully together that you happily forgive the infrequent dips

Iron Man 2 remains one of the weaker MCU entries, but it's a series of films which works so wonderfully together that you happily forgive the infrequent dips. After the rush-job German 4K release, the title finally gets the official Disney treatment courtesy of a trilogy 4K set, providing largely excellent video and audio, as well as the old (disc 1) extras on the included Blu-ray. Fans should consider it a must-have set.