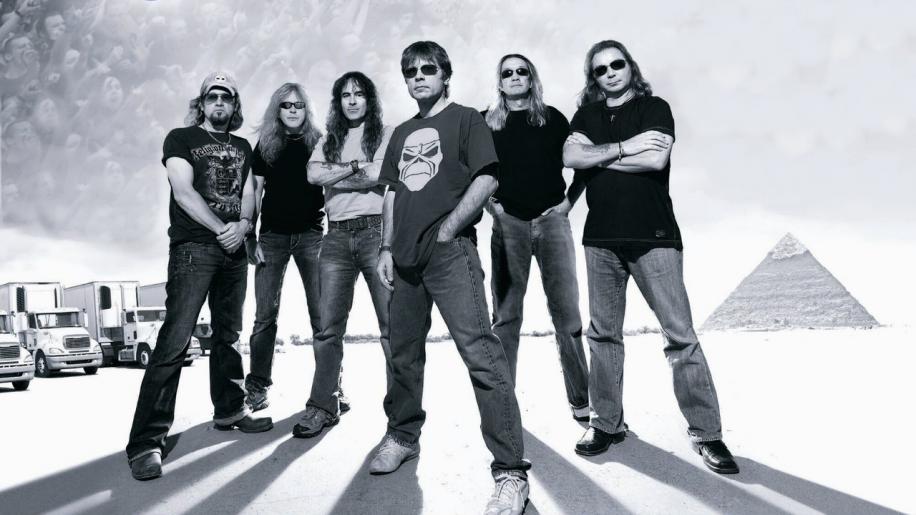 As a heavy metal fan and a Blu-ray enthusiast, Iron Maiden's first BD release; 'Flight 666' was a disc that I was looking forward to getting my hands on. I'm a big fan of concert DVD/BD releases in general, with some of my favourites including 'Metallica S&M' (DVD); 'Jarre in China' (DVD); 'Blackmore's Night: Castle's and Dreams' (DVD); 'Deep Purple: Live at Montreux' (BD); 'Queen: Live at Montreal' (BD) and of course 'AC/DC: Live at Donnington' (BD). Although a wide range of music genres dwell in my concert movie collection, metal concerts are the ones which I really enjoy (being a die-hard Metallica fan). I own 'Iron Maiden: Rock in Rio' (DVD) and once I saw these guys performing live on this release I was completely blown away!

In case you didn't know, Maiden are a pioneering heavy metal band from England (Leyton, East London to be precise), comprising six members; Steve Harris (bass/song-writer/vocals); Bruce Dickinson (vocals/song-writer and pilot!); Janick Gers (a lefty who actually plays guitar right handed!); Dave Murray (lead guitar and one of the only remaining members of the original Maiden line up); Nicko McBrain (insane drummer) and Adrian Smith (lead guitar/vocals/song-writer, he left the band in 1990 but returned for good in 1999). Although all of these guys are on the wrong side of fifty they can still shred with the best of them and are gifted with both musicianship and the ability to perform. Dickinson's theatrical voice lends to the whole Maiden experience, Harries drives the performance with powerful bass twangs while Gers, Murray and Smith duel with each other in perfect harmony. McBrain solidifies the whole sextet, often pounding his snare with the fatter end of the drum stick to afford a more aggressive sound. As the forerunners of the New Wave of British Heavy Metal (Maiden formed in 1975), which sparked the metal revolution in the early eighties, Maiden have lost none of their drive or ability over the years (even if they have suffered from numerous line-up changes). I have seen plenty of gigs in my time and Maiden are one of the last bands that I need to see!


So enough of my passionate warbling and let's get onto the movie the movie itself. In a slight twist to the usual concert DVD/BD concert offerings, which usually consist of a recording of an actual gig with nothing else to add to the formula, 'Flight 666' is a documentary crossed with a concert. Filming took place on Maiden's “Somewhere Back in Time” world tour (Feb/Mar 2008) for which the band chartered a customised Boeing 757 airliner and transported 12 tons of equipment (and themselves and their crew) to play 23 sold out stadium gigs (in 13 countries) in 45 days, which over half a million rabid Maiden fans attended. How metal is that!! Thankfully award winning documentary makers, Banger Productions (who filmed 'Metal, A Headbangers Journey), accompanied the band to document this mammoth tour. The entire production was shot in high definition and the audio was professionally mixed for this release.

With over 70 million albums sold worldwide and having played some landmark festivals (Donningtion, Rio, Poland during the height of Communism), metal madmen Iron Maiden are taking touring to the next level. The documentary charts the first leg of their “Somewhere Back In Time” world tour (which is based on their 1985 “World Slavery Tour”). The movie opens with a performance of the aptly named “Aces High” in Mumbai, which the band deliver as only a veteran metal outfit can; practiced, intense and loud! Thousands of rabid, die hard Indian Maiden fans thrash along in complete unison and join in with forceful presence during the chorus. This sets the scene for one of the most ambitious rock tours in history. Once the audience's attention has been firmly grasped around the throat, the origins of the tour are explored as we join the band at the first airport of many; Stansted, England. Bruce Dickinson expands on the concept for his latest endeavour and how he envisioned a tour where the venues played would not be restricted by location, as they would charter their own plane (which is named “Ed Force One”!). A seemingly ingenious concept but not without its conditions; namely time. The plan is to play 23 gigs in 21 cities in 12 countries across five continents, all in 45 days! Dickinson explains the meticulous planning involved and the strange situation of having crew, management and band in the same cabin for the duration of the tour. However, this being Maiden, they have touring down to a fine art with a loyal crew who operate like true professionals, often working 07.00 to 02.00 just to make sure that the show can go on. With such an experienced team and the dedication of the band members there's never really a doubt that the enormous undertaking will be anything other than a success.

The initial pace of the documentary is pretty frantic to say the least. It's a whirlwind of activity as the band race from continent to continent to the backdrop of classic Maiden tunes. The main meat of the documentary features the crew and band as they comment on their time with Maiden and life on the road. The crew provide some amusing, crude antics throughout, as is to be expected from metal roadies! There are also plenty of interesting backstage footage of the crew goofing around and the band dissecting (albeit very briefly) their performance. Commentary from the band is adequate with Dickinson providing the most interesting (and enthusiastic) insight into the mechanics of taking the massive tour on the road and being a part of the machine that is Iron Maiden. McBrain also features predominantly but mainly as a very modest man who seems to really enjoy both every moment that he spends on tour and being a part of the band itself. Harris also pops up in a couple of interview bits (including the mandatory “Harris playing football” shots), where he discusses forming Maiden all those years ago, the inspiration for their music and how they have vehemently resisted change over the years (if it ain't broke then don't fix it!). Smith and Murray also feature (but a lot more sporadically) and also comment on the tour/the band. Gers is somewhat of an absentee participant in the documentary, apparently more interested in enjoying the solitude of local Irish bars rather than talking to the camera!

This is the main reason why I was slightly disappointed with this release. I suppose I was expecting more of a 'Some Kind of Monster' style documentary which would provide a very candid and intimate look at the inner workings of one of the most well-known and pioneering metal bands. Unfortunately the band members themselves are not the focus of the feature, the tour is. The tour itself is a mammoth undertaking but more important than how the tour is executed is where the tour is going. For some of the poorer third world countries such as India, Puerto Rico and Chile, the chances of ever seeing a world class metal band in action is slim to none. But with Maiden taking the touring laws into their own hands and making their own concert (flight-) plan, the path is illuminated to bring metal to the masses. That is just what Maiden do with this tour and some of the footage featuring the fans from the aforementioned third world countries is very moving. In Costa Rica the fans queued for over a week to guarantee a place near the front, with one fan quitting his job so that he could see his idols. The emotion on the faces of the fans following the gig(s) is blatantly obvious, with tears welling in the eyes of a young man who successfully secured one of McBrain's drumsticks. Another fan is an actual ordained minister called "Fr. Iron Maiden", who has a son called Steve Harris! For fans like myself, who have the luxury of seeing major bands at least once a year, the reality of what this tour has achieved is enormous and Maiden definitely need to be saluted for this. That's not to mention the incredible concert footage (thankfully included in its entirety in the extras section), which really makes this release worth purchasing and features at various intervals throughout. The band are captured performing some of their all time classics (“Fear of the Dark”, “Run to the Hills” and “Rime of the Ancient Mariner”) in a whole host of different stadiums around the world. The multiple angle high definition cameras see all and every band member is given ample on screen time to strut their stuff. Although the concert segments are rather sparse in the main feature and are often cut short, it's these scenes which provide a stunning example of why Maiden are one the greatest live acts in the world.

A formula for the documentary emerges very quickly which is as follows; concert footage; brief pre/post-concert footage (which includes the fans); in-between gigs R&R featuring members of the band/crew and then plane footage. While for the first forty minutes or so this formula is fine, it soon becomes repetitive and aside from the live performances can be slightly boring at times. As I fan of the band I have no problem watching the Maiden guys playing tennis with Pat Cash or hanging with Lars Ulrich/Tom Morello but it seems as though the majority of them seem slightly put out by the constant camera presence. This is especially true of Gers who barely features in the documentary at all. It's only really Dickinson and McBrain who provide constant commentary and entertainment, with the rest of the members speaking when spoken to but seemingly under duress. There is also plenty of filler with a vicious cycle of lewd crew jokes/raging fans and umpteen shots of the plane being the main culprits. Ultimately 'Flight 666' is a movie which charts one of most ambitious tours in the world but contains too many elements (the band, crew, equipment, the plane, the fans and the music) to really delve into the depths and expose the inner workings of the one of the greatest metal bands on the planet (or really expand on any of the aforementioned subjects). As such, the entire presentation seems somewhat disjointed as it jumps between its many topics. However, all aspects of the landmark tour are captured admirably and the concert footage, which is the reason why the majority of fans will purchase this release, will most certainly not disappoint.