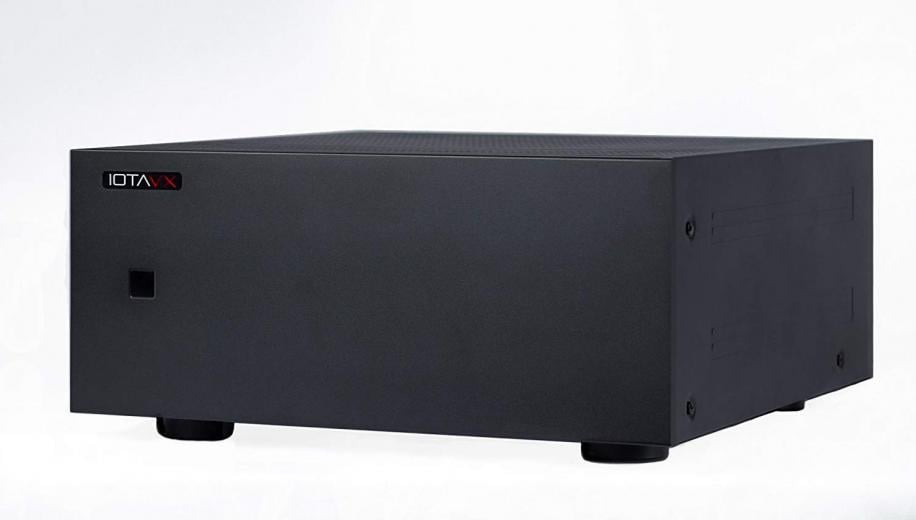 This is a seven-channel power amplifier from a British audio company who are based in Middlesbrough, in the north east of England. IOTA enterprises are probably a name many AVForums members have never heard of, but their goal is to create great sounding products using the experience they have gained over many years in the industry. They claim to have a team of world-class engineers and experience spanning 60 years in the Hi-Fi industry. IOTA claims that amongst their team are specialists in amplifier technology, audio software, loudspeaker construction and room acoustics. With this experience and their approach to lean manufacturing and sales, they are aiming to produce world-class audio products for Hi-Fi and Home Cinema at affordable price points.

The IOTA AVXP1 is their first seven-channel power amplifier designed for multi-channel use in high-end systems where an audio processor will be the heart of the system. However, given the price point, it may also appeal to those with good quality AV Receivers with seven pre-outs, to beef up their amplification performance. So, can £1,060 buy you a well built and high-performance multi-channel amplifier? There is not a great deal of room to introduce any design flair to a large rectangular box full of transformers and power amps. What does hit you straight away when unpacking the IOTA AVXP1 is the weight and build quality on offer for your £1,060. It measures in at 198mm (H) x 435mm (W) x 453mm (D) and weighs 30.3Kgs once unpacked. The packaging is also worth mentioning here as it is fully foam padded and double boxed, making sure the unit arrives in perfect condition and again points to a level of pride in the products IOTA manufacture.

The black chassis is an all-metal design with dampening feet to the bottom of the unit and thick metal body. It feels well built and screwed together with a reassuring weight and nicely polished surfaces. At the front is the IOTAVX logo to the top left and a power button centrally placed on the left side of the front plate. This lights up Red when in standby and White when powered on. It will also flash if there is an issue with the unit. The top plate is well ventilated for heat extraction and, in use, it never gets overly warm. Just make sure you don’t cover over the vents, and leave plenty of gap above if rack mounting items above it. Around the back, we have the connections and they are well laid out and easy to follow. For inputs, you have the choice of unbalanced RCA or balanced XLR sockets with a dip switch to select which route you have taken for each channel. There are also two remote switches and a power socket with hard switch, as well as the seven channel binding posts, which are large and also accept banana plugs. Just like the rest of the design the connections are simple and well positioned with no fuss.

Given it is a seven-channel power amp, there is nothing else to really mention about the design and layout. I have been using it for around 5 months in total and it has become part of my everyday system and to be honest I never really notice it as it just blends into the equipment rack and does its job without any fanfare or design flair, just as it should. As we have already mentioned, this is a seven-channel power amplifier that is designed for use in a multi-channel home cinema and uses class AB amplification. It can be used with the IOTA AV1 processor or with any AV processor or AV Receiver with 7 channel pre-outs to feed the amplifier.

How was the IOTA AVXP1 Tested?

We didn’t have an AV processor to hand during our months of testing, so we used the IOTA AVXP1 as a power amplifier with audio from the pre-outs from our Yamaha RX-A3050 AV Receiver. The speakers used were MK MP300 LCR with S300T tripole surrounds with two X12 subwoofers and the Yamaha powered height/ceiling speakers. Sources were 4K Blu-ray, Blu-ray and streaming services including TIDAL.

Coming from using the Yamaha RX-A3050 with the built-in amplification as my normal reference, it was clear to hear an instant improvement in power and headroom from the IOTA now taking over that role. The figures quoted by the company are believable once you start using it and to be honest, the 4 Ohm MK MP300 speakers came alive when they were fed a decent amount of power, yet you could also take notice of the headroom the system now had for fast moving transients within soundtracks. When the Yamaha was top of their AVR range, a number of years ago, it was considered a premium product and by adding in the IOTA it suddenly jumped up in power and quality, refreshing what could be considered a product getting long in the tooth. This is where the IOTA can bring new life into a slightly older system depending on built-in amplification.

One of my new favourite test discs is the 4K UHD of The Greatest Showman and the opening track with its excellent turn of speed in the bass and snare drums. The IOTA helped the MK’s sound instantly loud enough to deliver the dynamics, yet also stop instantly with no overhang. Dialogue and vocals took on more depth and weight thanks to the instant dynamics and power available. It was like the MK MP300s had just woken up and realised they could sing much louder and cleaner than before. Dynamics were strong without any hum or distortion present at all. The IOTA also doesn’t get particularly hot in full use either.

Turning to the 5.1 mix of Dunkirk was also a treat and a nice reminder of the power the reference system had been down on for some time. The mix sounds immersive thanks to the excellent work done by the creative team, with just 5.1 channels thrusting you straight into the action, but yet again also highlighting the transient changes and quietness of some scenes. Yes, it is possible for a soundtrack to be quiet, yet highly dynamic. The target practice on the beached boat is tense, quiet, yet with huge dynamics when a bullet hits the steel hull and pierces it. There was just a little more headroom and capability on offer, compared to the built-in amplification of the Yamaha, that transforms the system.

Even with music tracks from high-quality streaming services the extra power and headroom was instantly noticeable in opening up the system and the capabilities of the Yamaha’s processing with soundtracks, and the neutral aspect to its DACs with two-channel music. Overall, there is not much else a power amplifier can do, yet the IOTA performs its role without any effort or issues.

If you are looking to add a little bit more power and precision to your AVR via the pre-outs, or want to go with a separate processor, the IOTA seven-channel AVXP1 is stunning value for money and will instantly upgrade your power on demand with all channels driven, and add in extra headroom over the built-in amplification in most midrange AV Receivers. We could instantly notice the jump in power and headroom available against our Yamaha RX-A3050’s built-in amplification and it really does open up the performance to a level where you would be expecting to pay many times more.

As a pound versus performance product, we can’t think of any other product in the price range offering the same power and flexibility as the IOTA and, as such, it easily picks up our Best Buy badge. This is one of those rare products that just shows up, does the job extremely well and at a price point you would imagine being at least three times more than it is. Well done IOTA.