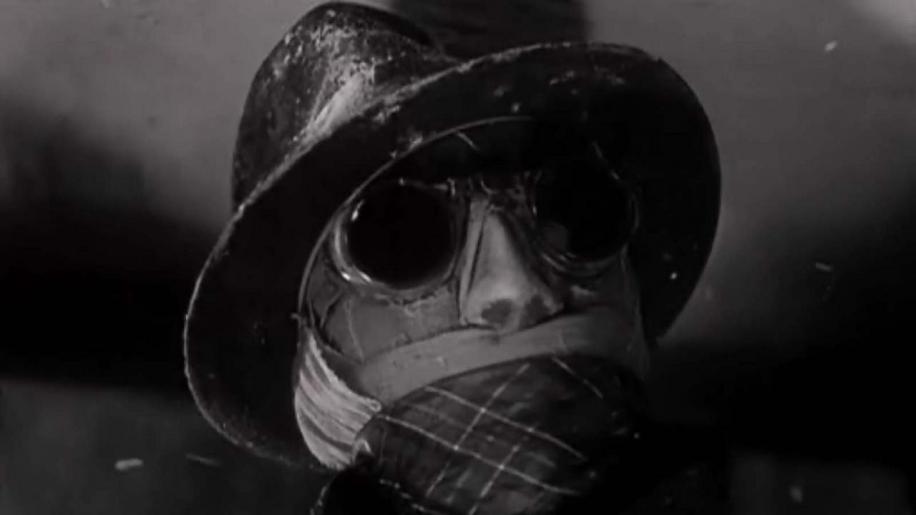 Presented in full screen 1.33:1, Invisible Man betrays its vintage with abundant damage throughout. There are speckles, scratches, nicks and pops aplenty, but there is remarkably little grain on show. In fact, there are times when the image looks quite clear and detailed, although this is often compromised by the softening-up and hazing that accompanies old TV broadcast material, which usually makes itself apparent during sideways motion or sunlit exteriors. Contrast isn't too great, either, and even seems to accentuate some of this hazing, leading to elements of glare and dazzle that are a little uncomfortable to view on screens larger than 44 inches. Blacks can be quite respectable in some instances, though this is not consistent throughout the entire season, with considerable murkiness and fade-to-grey in many episodes. This variance affects the level of detail on offer, too. It is not uncommon to have reasonably well-rendered interiors, close-ups and outside daylight scenes, but the quality seriously lapses during a lot of exteriors, distance shots and, particularly, night-time sequences - the parachute landing in episode two, Crisis in The Desert, being a prime example. Sadly, the digital transfer is further let down by the often excessive edge enhancement, which is painfully apparent around practically every object - leading to outlines that are way too shiny and distracting.

I watched this initially on a 44 inch screen, and I would say that this size is really the limit for what this transfer is capable of being presented at. Anything larger would, I fear, become an unpleasant mess. However, returning to it on a 32 inch screen revealed the viewing experience to be far more palatable. The problems are all still there, but to much less distracting degree. Strangely enough, this release has been granted a full DD 5.1 mix besides a slightly more conventional DD 2.0 stereo mix. Now, I have to say that this surround track is very odd indeed. Very active right from the get-go, we have oodles of rear speaker activity, a wide range across the front array, and a quite aggressive aural presentation throughout. However, and perhaps unsurprisingly, it doesn't work. At all. The mix is tremendously unbalanced, with the aural effects rarely matching what is seen on-screen. For instance, whenever we are in Brady's lab, and surrounded with lots of bubbling chemicals and whirring equipment, the mix becomes far too ambitious and over-employs the surrounds to the degree that things seen happening front and centre are still heard emanating from behind as well. This disquieting effect is also apparent on many other complicated and active scenes. Voices often seem dislocated from the speakers and the score is set much too loud for the rest of the sound design. Dialogue is frequently submerged in the overall cacophony of music and effects - just listen the cars roaring around the set-up - and is also harsh and tinny. A couple of episodes - Behind The Mask, in particular - suffer from a high-pitched whining noise in the background which is very off-putting. Now, this could obviously be down to the original tapes, but if you are going to go to the trouble of creating a brand-new surround mix, then I'm sure that this anomaly could have been addressed with more accuracy, too. The 5.1 is a failure in my book, folks - overbearing, badly mixed and directionally inaccurate.

The DD stereo track is lot better, although still too loud and somewhat dislocated from the visuals. It gains points over the 5.1 mainly because it possesses a better balance and makes for a more convincing and comfortable listening experience. Spatially though, it still sounds false, with faltering dialogue and a score that has been amped-up too much.

Still, in a way, it is nice that the company behind this release at least attempted to re-invigorate it with surround sound, though a little more time at the mixing desk could have resulted in a much brighter and far more subtle experience. A gallant failure. Absolutely nothing added with this release, I'm afraid. Well, I enjoyed the show. It's not a classic that's for sure, nor even particularly memorable. But I found that it had an agreeably mean streak and an excitingly frenetic pace, packing quite a bit into each episode. The 50's style of acting is clipped and rapid-fire and the villainy portrayed has an often distinctly racist flavour in keeping with the Cold War threat, and the clinging to the last vestiges of the British Empire that the decade still sought to expound, yet there is an economy to the writing that is quite refreshing when compared to the show's more laconic American counterparts of the time. There is literally no time wasted in any episode.

Dark Sky's DVD is very lacking, though. The image is disappointing even given the show's vintage, and the sound design may be an audacious step - but it is still an aural disaster. And the lack of extras is shameful. This is a show that will pique the interest of many genre fans who, like me, will have next to no knowledge of the production at all, so it is very disappointing that nothing could be found to provide it with some background.

Overall, Invisible Man is an interesting, but terribly flawed, release. Definitely a sample it before you buy it type of deal.