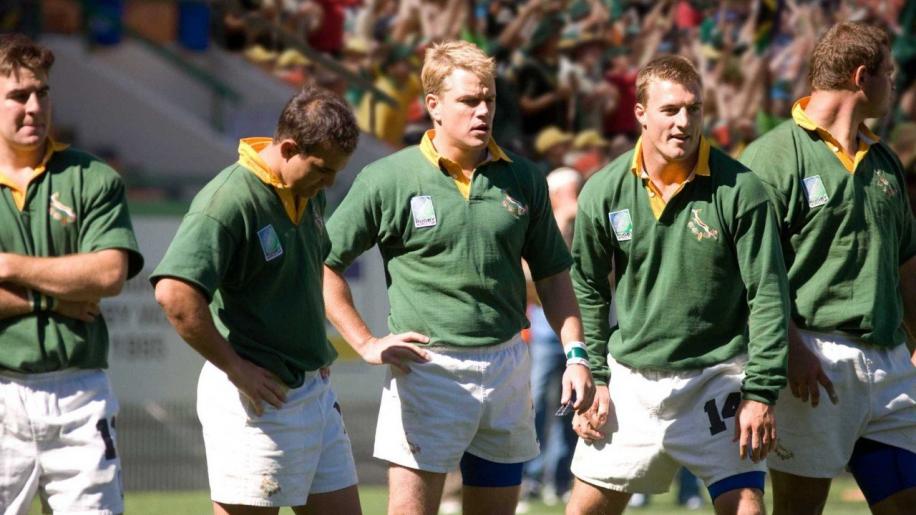 With the focus of the entire planet on South Africa courtesy of the World Cup, there could be no better timing for Clint Eastwood's film 'Invictus' to be released on UK Region free Blu-ray. The film recounts the true life tale of Nelson Mandela's use of the 1995 Rugby World Cup (hosted by South Africa) to unite a nation divided by the skin colour and uneven distribution of wealth.

This film was of particular interest to me as I spent some time working in South Africa, particularly in Johannesburg, and I had visited the government buildings in Pretoria. Even today, it's possible to drive through the township of Alexandra on the way in from the airport towards the wealthy suburb of Sandton and arrive at a crossroads. Here the divide between rich and poor is painted graphically as on one side of the road you have the tin huts where the poor, predominantly black, people live and on the other you have the large houses surrounded by high walls and barbed wire where the well heeled, predominantly white, people live. I had also been to Nelson Mandela Square where a larger than life size bronze statue of the great man presides over the fountains. So having soaked up some of the culture and visited the locations, the film somehow had more immediacy for me.

Morgan Freeman's portrayal of Nelson Mandela is one that commands respect as it isn't long before you forget that you're watching an actor and start to feel that you are witnessing history and the real person.
Mandela's use of the 'common touch' to communicate with others comes across in volumes - overcoming some of the resentment and lack of trust he had to face when first appointed President.
Prejudice is further displayed in the script by the scene where the newly appointed black Presidential bodyguards and the former white 'secret service' are forced to work together.
When the Africaans policemen arrive, the leading black bodyguard asks warily, “Am I in trouble?”
Naturally, with a film of this type we see them gain respect for each other through experience and a working partnership has been formed by the end of the film.

Mandela pulls in Francois Pienaar (Matt Damon), Captain of the South African Rugby team, the Springboks - and explains that the eyes of the country, if not the world, will be upon them during the World Cup tournament and he asks that they have a roadshow whereby they visit the townships and meet the Rugby mad youngsters. A particular favourite among the fans, Chester Williams is the only black member of the team, and he is the focal point - setting an example for the youngsters through hero worship. Mandela also encourages Pienaar to lead by example, following his own style as the new President of South Africa.

In a very poignant scene, Pienaar visits the tiny cell where Mandela was held captive for his 'terrorist' political views (one man's terrorist is another man's freedom fighter) and gains an insight into what the man had been through and ultimately understanding grows.
The rugby matches themselves are involving and the final, when Mandela attends, has you on the edge of your seat. There are also several moments which are orchestrated to make you believe that something awful is about to happen and Clint Eastwood builds the tension here to great effect.

Now, I've been a Clint Eastwood fan since the days of the 'Dollars' Spaghetti Westerns, I've had a sneaking admiration for the Dirty Harry movies and laughed along with the 'good ole boy' movies he made with Clyde, the Orangutan. I was impressed by 'The Outlaw Josie Wales' and over his directorial career have come to respect him as a good technician. I have to be totally honest though, and say that I never believed Clint had it in him to deliver a movie of the quality of 'Invictus'.
The film is moving, rousing and causes pride to swell in the chest on several occasions. To wrench this amount of involvement from an audience takes skill and it's simply that we have never seen this side of Mr Eastwood before. I must admit to being impressed as most of the films he has directed have been somewhat cool, if not actually devoid of emotion.
Much of the impact of 'Invictus' comes from Morgan Freeman's solid performance and it is underlined by the excellent score by Kyle Eastwood (nepotism rules) and Michael Stevens. The score does what it's meant to do, by giving us a feeling for the atmosphere of the place and also by becoming grand at moments of achievement without sounding corny.
This is a well made movie that strikes a good balance by avoiding sentimentality yet hooking the audience through its understanding of the human condition.

It would be wrong to leave Matt Damon out here as he puts up a fine show as Pienaar and holds his own against Freeman in the acting stakes (although it really is Freeman's movie). Young Mr Damon reflects the pressure of position forced upon him in a very credible performance as he deals with one problem after another - and we're really on his side as he battles against the prejudice of members of his team.

The Invictus poem, given by Mandela to Pienaar in the movie to inspire him is a rare occasion when the script by Anthony Peckham diverges from fact.
The word "invictus" is Latin for "unbeaten". It is also the name of a short poem written in 1875 by William Ernest Henley, a British poet who wrote it while in hospital having a foot amputated.
In real life Mandela did not give Pienaar a copy of the poem, but something that the audience would not have found so inspiring - so a bit of Hollywood 'licence' was taken with the facts and, in so doing, produced a nail to hang the story on. Well, it made it a better movie as it's what we would have liked to have happened.
Very statesman like it is too!