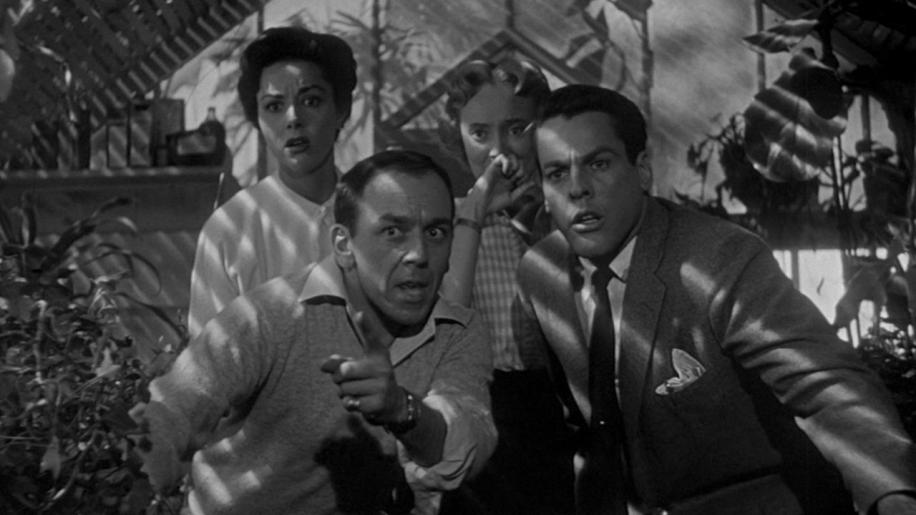 This release contains both a full-screen 1.33:1 version, which you shouldn't bother with, and the original 2.35:1 aspect, which captures all of Ellsworth Fredericks' wonderful cinematography, which is, obviously, the one to watch.

Firstly, the image is quite grainy at times, although print damage is actually quite rare. The picture is relatively clean and crisp, though I think the contrast is a little out - blacks, although occasionally very strong, can stray quite easily into varying shades of grey, and whites can appear too glaring, especially around the edges. The detail, on the whole, is good though. There's plenty of dripping fluids oozing from the pods as they burst, though it's also quite obvious that there is a fair bit of washing-up liquid bubbling away there too. The silky web-like threads that cover the newborn pod-people aren't quite as clearly defined as I would have liked, but there is still lots of depth and clarity afforded the scenes in the greenhouse despite the copious use that Siegel and DOP Ellsworth Fredericks make of the shadows.

Edge enhancement is there but it is not too bad. Otherwise, the digital transfer does a pretty good job without any compression gremlins spoiling things. Presented in 2-channel mono, the soundtrack is pretty clear and robust, offering a fine delivery of Carmen Dragon's (what a name!) suitably evocative score. Dialogue is well-rendered too, without any hiss or distortion, remaining clean and crisp throughout. Not a great deal here, unfortunately. All we get besides the original theatrical trailer and a scanty page of notes on the back of the chapter listing insert is a brief interview with Kevin McCarthy. Un-timed, but not very long, this interview is still a bit of an endurance test. McCarthy is on fine form all right, but the guy asking the questions, Tim Hatton, literally sledgehammers his way through it with a loud and wholly inappropriate manner. He has a set of questions to ask, and by God, he's going to ask them, no matter what! There's a little tiny mention of Sam Peckinpah, who was a dialogue coach for the film and even has a small role in it - as the gas man - but McCarthy nicely kills this anecdotal off-shoot stone dead by informing Hatton quite unequivocally that he didn't stay in touch with the great maverick, ruining one of Hatton's lines of questioning. Sadly, this is a lousy little extra, despite Kevin McCarthy's affable and informative nature.

I can't help thinking that a more comprehensive special edition will soon come along, what with the Kidman/Craig version being released. In fact, all the movie adaptations of Finney's story have been severe underachievers on DVD. At least Philip Kaufman supplies a commentary track for his 70's update, but Abel Ferrara's edgy re-telling gets nothing. It is a shame and also somewhat surprising, given the tale's trend-setting status and continued popularity. A great film let down by a lacklustre DVD. Then again, Invasion Of The Body Snatchers was a very early release on the format, back in 1998. However, the film is a classic of tense paranoia and political subtext, and took bold steps to elevate the genre beyond the all-too-easy man-in-a-monster-suit rampages that were clogging up the picture houses of the day. The issues it dealt with, that of the horrors of losing one's identity and soul were heady notions that still stake a fierce claim on the psyche today. The enemy is among us all right, whether spawned from alien seeds or from extremist ideology.

And, just as Kevin McCarthy warned us back in 1956 and then again in 1978 - because we obviously hadn't listened first time around - watch out ... “They're here already! Your're next!”