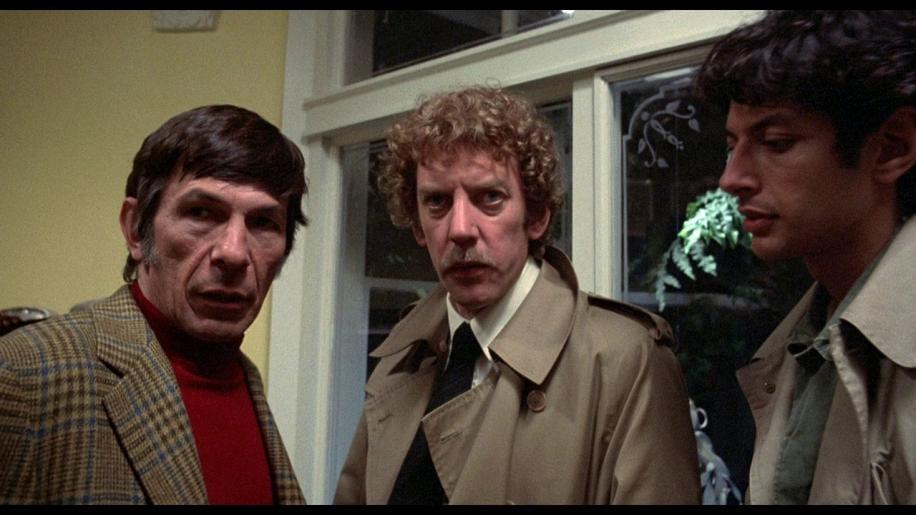 There is something about movies from the 70's. They have a grim reality that other time frames cannot replicate. Look at the French Connection or The Exorcist, or indeed this version of Body Snatchers. Colours are muted, appearing cold and hostile, clothes have a threadbare look as the dirt and grain of the print gives the whole frame a ground down repressed feel. And there is a lot of dirt and a lot of scratches and a huge loss of detail due to the non anamorphic transfer. But you know? I don't care! Sometimes I can put up with the hugely unimpressive black detail levels, that brighter scenes are still too dull, that flesh tones are often too pallid or overly red - it doesn't matter, because the movie has a plot and a character reference that pulls the imagination of the viewer to the fore and we, after a while, forget about the shoddy picture. In Body Snatchers, French Connection or video game Fahrenheit this is exactly what happens and I think the media are all the better for it. This is one of the best movies for sound, especially considering the 70's origin. The alien screams are spine tingling, as is a very well placed rendition of Amazing Grace. The sick squelch of a Pod opening or a dry breath of a wispy tentacle - even the mechanical inhumanity of a human voice over a megaphone all add to a hugely impressive soundscape. Loud contrasting conversations, aggressive machinery make us feel on edge and never comfortable, despite a mere Dolby Surround mix. Technically, rear channels are rarely used, with some motorbikes panning to the rear, but nothing special. Bass is none existent with no discernable output under 80hz and the vast majority of the sound originates from the centre channel. So technically inferior sound, but the ideas behind the sound track are laudable indeed. Only a commentary, but an unusually intriguing one. We hear how Star Trek was nearly released before Star Wars, and with a different story. We hear how this was how Nimoy got the role as Kibner and how Robert Duval got his cameo. How Donald Sutherland did all of his stunts towards the end and how good old Lucas, before he lost the plot, came over to visit on set. A really good commentary that, as you listen fills in all of the blanks of you missed the first time you watched Body Snatchers. A fantastic movie with an awful name, Invasion of the Body Snatchers is an endearing movie that hit all the right buttons. Apart from some slowdown in the second act and some forced acting, this is a wonderful, rich, emotive movie that deserves a place in anyone's collection. Except vegetarians.