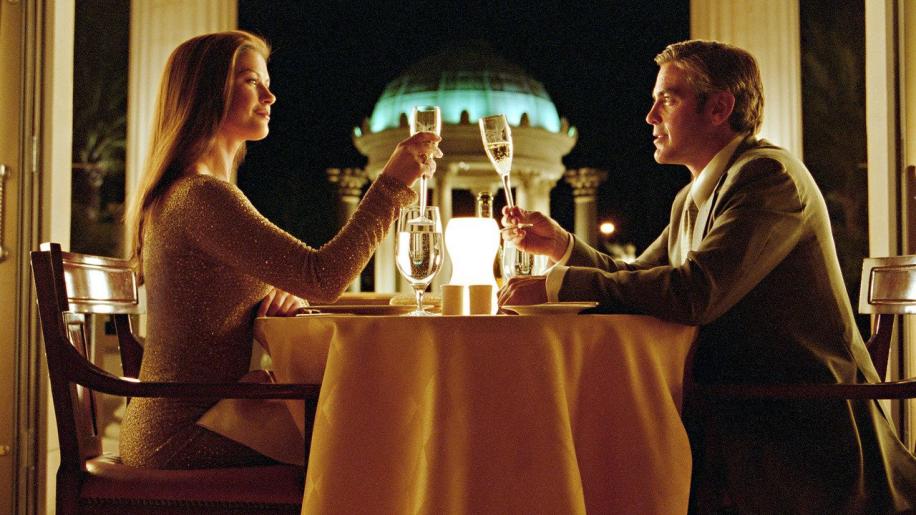 Miles Massey (George Clooney) is a successful L.A divorce attorney, and author of the iron clad, impenetrable legal document the Massey Pre-Nup. With millions in the bank, two new Mercedes and a private jet he has everything he desires. His success at negotiated divorce settlements has left him bored and in need of a challenge. In steps Marilyn Rexroth (Catherine Zeta-Jones). Marilyn is in the process of divorcing wealthy property magnate Rex Rexroth (Edward Herman) but due to Miles' considerable skills in the courtroom Marilyn is left with nothing. Determined to seek her revenge she sets out on a devious plot to marry a wealthy man, divorce him for his money, and give Miles a little payback along the way in this enjoyably wacky romantic comedy.

The Coen Brothers movies are usually populated by characters wonderfully close to the edge of sanity, in a sort of parallel universe, where everything looks the same but is just a little off kilter. Think of films like The Big Lebowski, Oh Brother Where Art Thou (another Clooney vehicle), and Fargo. Intolerable Cruelty is not quite in that mold. A sort of Coen Lite or Diet Coen, all the flavour but none of the calories, nothing to really get your teeth into. Many have described it as their worst movie to date, and considering the fantastic filmography under their belts that is probably fair, but it is far from a bad movie. The story is a simple tale, and asks questions about the values we attach to our relationships, the meaning of love, the acquisition of wealth in an increasingly materialistic world and can Clooney and Zeta-Jones possibly look any more attractive if they tried. It retains a world populated by delicious characters such as Gus Petch (Cedric the Entertainer) a private detective, and Wheezy Joe (Irwin Keyes) an asthmatic hitman, and a lemon sharp line in verbal wit including that elusive beast, American sarcasm. When asked to bring a green salad the pragmatic waitress replies “What other f**king colour would it be”. Clooney clowns around with the kind of self-mocking that only a man who knows that the mention of his name has the female thirty-somethings wetting their pants can achieve, and Zeta-Jones takes another forceful step up the Hollywood leading lady ladder (how's that for alliteration). Their on screen rapport is feisty and frivolous and played mainly for laughs. As romantic comedies goes this is mainly comedy and not very romantic (unless you think a plot to murder the woman you love to be a romantic gesture) and while not awash with the sparkling dialogue or expansive plot and characterization of the Coens' best work, this zany little piece will have you laughing out loud in a number of scenes (yes I am talking about Wheezy Joe and the inhaler), and smiling to yourself throughout. Coen Lite it may be, but that still tops most of the Hollywood by the numbers rom-coms by a country mile.