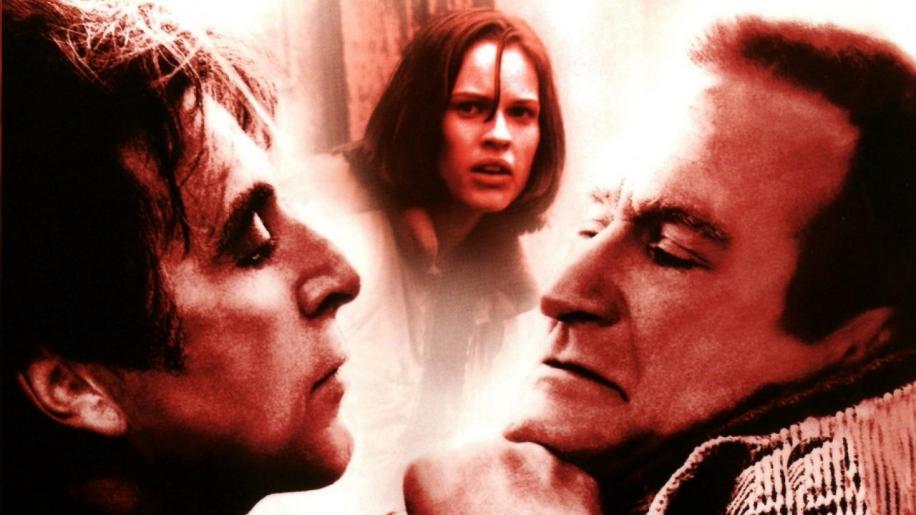 'Insomnia' was released in 2002 and was directed by Christopher Nolan. With 'Inception' standing as this year's Summer blockbuster and receiving rave reviews from the critics (having seeing this movie I agree but think that the hype was a little over done), there is no better time than this to release one of Nolan's earlier efforts on Blu-ray. This movie is based on the novel of the same name by Erik Skjoldbjaerg (from Norway), who later went on to direct his own adaptation in 1997. Like the recent buzz of excitement surrounding the planned Millenium series of movies and the first instalment, 'The Girl with the Dragon Tattoo', here we have a well received European movie which is treated to an American overhaul. So, with the stellar 'Memento' (2000) under his belt at the time of this movie's release, Nolan looked to take his career to new heights with this movie.

Speaking of career highs, Nolan manages to convince none other than Al Pacino ('The Godfather') to take on the main character in this movie, Will Dormer. Robin Williams ('Mrs. Doubtfire') takes on the other (lesser!) primary role and plays Walter Finch. Hilary Swank ('Million Dollar Baby') also makes an appearance as Ellie Burr. With three actors of such high calibre (and indeed all Oscar winners), Nolan seemingly has all the star power to make this one a winner.

Dormer is a veteran LAPD detective, who is coming under fire from Internal Affairs for potential evidence tampering in a prior case; this worries Dormer as all the criminals he put away could be back on the street if he's proven to be crooked. He is sent on assignment to Nightmute, Alaska, with his partner (Eckhart), to investigate the murder of a seventeen year old girl and to keep him from interfering with the investigation into his past cases. Arriving at the local police station, Dormer meets with a young and enthusiastic rookie named Ellie. But things in Nightmute are a little different than other places. Due to the geographical location of this small town, they receive constant sunlight twenty four hours a day. Nonetheless, Dormer is unperturbed by the perpetual day and relentless sunshine, and sets to work on unravelling the case.

Analysing all the facts and details with a practised eye, Dormer cleverly lures the murderer back to the scene of the crime. Seconds away from making the arrest, their cover is blown and the murderer flees for cover. As Dormer gives chase, he comes close to confronting the killer several times, but the thick fog and lack of sleep cause him to become disorientated and he ends up making a big mistake. Terrified that this error will tip the balance with his battle with Internal Affairs back in LA, he covers up the incident and blames the murderer he was chasing. Dormer, receiving a call from Walter Fitch (said murderer), begins a strange relationship with the man who he is desperately trying to catch. It transpires that Fitch saw what Dormer did and if Dormer does not co-operate with him, he will spill the beans about what really happened on the foggy riverbed. Not one to be outsmarted by a cold blooded murderer (Dormer), an intriguing game of cat and mouse begins to unfold.

Although many perceive this movie as one of Nolan's weaker efforts I have to say that I enjoyed it. Sure it's a little run of the mill and it's nothing really new or novel but there's plenty to like about this piece. As is to be expected, the characterisation is spot on, with Nolan once again choosing to focus of the obsessive nature of his characters, while cleverly finding a way to blur the line between reality and imagination. The main players are as fleshed out as they can be, taking into consideration the run time (which is quite adequate at two hours), adding a lot of weight and believability to their respective situations. Nolan also uses plenty of different camera angles and other trickery to keep the audience off balance. For example, there are instances of hallucination, which are coupled with quick angle changes and other dazzling/blurring effects, mirroring Dormer's confusion over the mental strain that he is under and the lack of sleep that he is experiencing. Fog is used perfectly as misdirection and also to highlight Dormer's inner thoughts as he becomes more and more confused as the line between delusion and reality blurs. The cinematography is at times stunning, with some wonderful panoramic shots highlighting the beauty of Alaska. It's also refreshing to watch a movie where the director knows how to get the most from his cast and he uses every possible opportunity to showcase the talent that he has at his disposal.

The aforementioned cast are collectively excellent and there are very few instances where the production is let down by the players. Pacino, as always, is perfection. Hovering over his every move and expression, Nolan obviously holds Pacino in very high regard and captures his scenes with many different camera angles to later pick and chose which ones work best. Pacino himself gets into character in every sense of the word, transforming into the world weary and perpetually exhausted Dormer. Simple changes of expression, tone and those heavy lidded eyes speak volumes and every moment that Pacino is on screen is both engaging and interesting. I have to say that I am not a massive Robin Williams fan as I find him somewhat overbearing and distinctly unfunny in his comedic performances (the exception being Euphegenia Doubtfire!). But here he puts on one of the best performances I have seen from him to date. Don't get me wrong, he doesn't chew the scenery or dominate every scene the way Pacino does but is still solidly impressive. He doesn't make many appearances (much of his interaction comes by way of telephone calls) but when he does, there's a calm air of disturbance about him that's unsettling. I firmly believe that he should take on more “bad guy” roles (obviously his performance in 'One Hour Photo' helped him land this part). The gangly and baby giraffe-like Swank was a little disappointing, with her bland face and doe eyed approach to acting. I suppose that she does fare well overall but is a little outclassed (unsurprisingly) when compared to her co-stars and has only developed her abilities since appearing in this movie. The rest of the cast provide solid support but Pacino really does put them all to shame.

The plot really is the only aspect of this movie which lets the overall production down. The pacing is adequate but there were a couple of moments where I found myself glancing at my watch. This is in part due to the time which Nolan takes to develop his characters and allow key plot developments to emerge but ultimately the premise is a little too straightforward to warrant such a tentative build in excitement and mystery. The first half of the movie feels a little repetitive, as Dormer gives chase and fails to catch Finch on two separate occasions. I also thought that seeing Pacino (or rather his stunt double) leap across buildings and over logs was a little unbelievable, given his age in this movie. As we move into the second half, things get more interesting as both Dormer and Finch come face to face and the game of cat and mouse which they play intensifies dramatically. This does not last long as we move to more of Dormer running around and trying to keep one step ahead of the wily Fitch. The premise of having your hero and villain on the same screen and seemingly co-operating for mutual benefit does work well but there's not enough depth to the plot to really keep the interest levels high, with the scramble to find pieces of evidence standing as the only real points for development aside from the characterisation. That being said, the action based portions do serve to reaffirm their grip on the audience, even if they do appear somewhat contrived. I do have a major gripe about the plot though; in a country where they experience perpetual daylight, why not invest in some black-out curtains??!!

Although I believe that the run-time could have done with some editing to trim the fat, the overall piece works well and the central performances do serve to add a lot to the finished product. While the plot does feel a little like an inferior 'Silence of the Lambs' at times, Nolan's clever direction retains interest. I most certainly agree with those who say that this is one of Nolan's weaker efforts but with the stellar movies that he has produced in the last number of years, I am not surprised. For those of you who are interested in thrillers and crime movies, then you could do a lot worse than checking this movie out and it comes recommended, scraping a seven.