In a film about the workings of the brain, Pixar manages to tug on the heart strings. 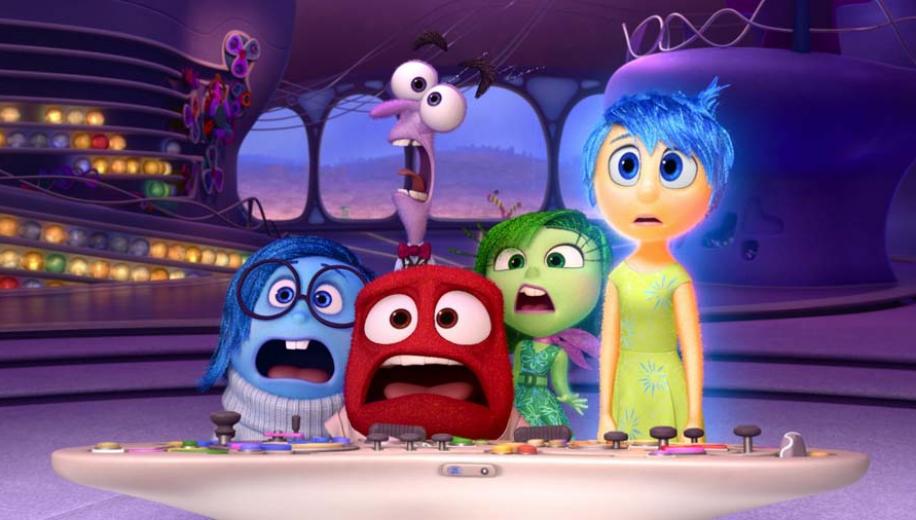 A coming-of-age animation film that literally takes place inside an 11-year-old’s head might not sound like an instant classic.

However Inside Out is sure to become a favourite for audiences all around the world, and showcases Pixar’s magic at its peak. Riley’s life is pretty perfect – nice house in Minnesota, loving parents, great friends. But then, just in case being an 11-year-old girl wasn’t stressful enough, she’s uprooted to San Francisco. The film is, really, all about Riley, but the main characters are the emotions inside her mind. Wacky, yes. But in a weird sort of way somehow through all the typical Disney-fied, Pixar-y colours and shapes there is something really real about Inside Out.
Riley’s emotions – Joy (Amy Poehler), Sadness (Phyllis Smith), Anger (Lewis Black), Disgust (Mindy Kaling) and Fear (Bill Hader) – run “headquarters” in Riley’s brain, and are responsible for powering her moods and storing and shaping memories. Headquarters is very much the control centre of Riley’s whole personality, where the emotions control everything via a control panel, and work to store Riley’s memories in orbs which are transported around the depths of Riley’s mind through a complicated system of tubes and tunnels and various other contraptions. In a way, it’s hard to believe Pixar haven’t strayed into this mind-territory before – this concept of the imagination is precisely where they’re at their most brilliant. I say the action takes place inside Riley’s head – in actual fact we do get to see the emotions’ work in action as we follow Riley through life, but Inside Out’s main lesson is that really, we’re all completely governed by those tiny little voices that control our thoughts, feelings and actions. Directors Pete Docter and Ronaldo del Carmen guide the audience seamlessly between the two worlds, and the stunning animation work presents us with two extremes: the harsh, daunting real world Riley is faced with, and the shining, deep and colourful one in her mind.

The all-star voice cast delivers some really funny lines all the way through the 100 or so minutes, and the extra little animations during the credits at the end are absolutely perfect. I really hate the phrase “emotional rollercoaster”, but if ever there was a film to use it about, it’s this. Over the course of the film I alternated between tearful sniffing, wry smiling and proper laughing and it’s absolutely something the entire family will enjoy.

As much as this is the family film of the summer, there are some deep themes at play here. What’s the point of long term memories? How much do we remember from the happy days of childhood? Why can’t I get that annoying jingle out of my head? The main action of the narrative takes place when Joy and Sadness are accidentally ejected from Headquarters: what happens to our minds when there’s only Fear, Disgust and Anger?


As with most Pixar offerings, Inside Out offers a lot more than just kid-friendly colours; it’s a film dealing with some pretty big questions in the most endearing way.

Desperate to get back to Headquarters and help Riley navigate her first day at a new school, Joy and Sadness take an epic journey through the most dark and scary corners of the mind: Long Term Memory, The Subconscious, Dream Productions, Imagination and Abstract Thought. During this journey the extreme skill of the film's animators really shines, and there is a particularly hilarious sequence in which Joy and Sadness battle to leave Abstract Thought, all the while being transformed into various renderings of themselves as abstract art pieces.

Without giving too much away, as the film draws into its final act it becomes clear that there is a serious point being made in Inside Out. Some wonderful aspects of childhood can remain, but we can’t hold on to everything forever, and there is a real importance to other emotions besides unbridled joy. The ending of the film packs a real emotional punch, and I for one left the cinema really moved by the entire experience.

With what may be the most challenging and brilliant concept the studio has ever conceived, Pixar has delivered a masterpiece. Inside Out deals with the universal concept of growing up and the human experience, and it’s impossible to imagine anyone not falling in love with the film. In years to come, we’ll look back on this as one of Pixar’s absolute best.