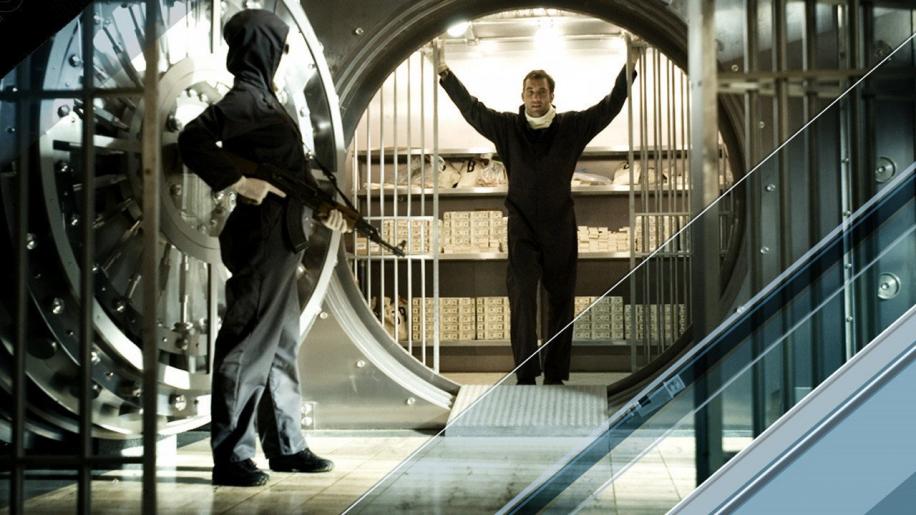 'Inside Man' was released in 2006 and was directed by Spike Lee (originally Ron Howard was chosen to helm this one). This movie is based on a bank robbery, which is a change to Lee's normal subject material, as he generally focuses on race relations and urban crime/poverty. That's not to say that Lee is incapable of delivering with more main stream subject material as his back catalogue contains some stellar pieces such as 'Malcom X' and 'Jungle Fever'. It seems that Lee was hoping that this big budget production, in conjunction with an A-List cast, would catapult him to new levels of stardom.

For this movie Lee has assembled a cast of very strong actors including a couple of Oscar winners (who seem to be punching below their weight in this movie). Denzel Washington stars as Detective Keith Frazier. Clive Owen co-stars as Dalton Russell. Jodie Foster plays Madeline White, although she doesn't get too much screen time and filmed her part in three weeks. Christopher Plummer ('The Sound of Music') is also on board playing Arthur Case. There's also strong support from Willem Dafoe, who plays SWAT captain John Darius and Chiwetel Ejiofor, who plays Detective Bill Michell.

The movie opens with a close up of a man (presumably in a prison cell) who introduces himself as Dalton Russell. Intelligent and methodical, Russell is a man who knows what he wants and doesn't repeat himself. He instructs us that he is planning a bank robbery. With the “who” and the “when” established, we begin our journey to find out the “how”. Dalton and his crew (all of whom are called different variations of Steve), disguised as painters wearing hooded overalls and sunglasses, descend with surgeon-like precision, disable all security in the prestigious Manhattan Trust bank (NYC) and take all the civilians hostage. Keith Frazier, a NYPD detective/hostage negotiator who was recently implicated in stealing money from a drugs bust, is called to the scene and receives a golden opportunity to redeem himself. He meets with Captain Darius, tactical commander of the S.W.A.T team. Both assess the situation and wait for the bank robbers to make contact. Arthur Case, the aristocratic owner of the bank, also makes his appearance at the scene and is adamant that he will stay until the situation is resolved. With prying questions and undisguised concern over the specific demands of Russell, Frazier grows suspicious as to the actual contents of Case's founding bank. Perceptiveness is obviously one of Frazier's stronger attributes as we see Case, following his ejection from Darius's command center, make a call to a certain Madeline White.

Super-bitch. That is the answer to the question “Describe Madeline White”. With half of New York's rich list (including the mayor) in her back pocket, White performs impossible tasks for royalty, government officials and others who have enough money to afford her professional discretion. Disrupted during a meeting with her latest client (Osama Bin Laden's nephew), White takes a call from Case. Obviously an important man, White leaves Mr. Laden to rush to the aid of Case. With minimal information divulged to White, Case instructs her to gain access to the bank and speak to Russell to ensure that his interests are protected. What follows is the slow unravel of a plot which contains more twists than a Curly Wurly. Russell and White (who is acting on Case's behalf) engage and bargain, exposing the reality that Russell knows more about the contents of the bank than Case's representative. Frazier and Russell also lock intellectual horns on numerous occasions, while White struggles to keep Frazier on side with promises of promotion, subject of course to his co-operation. Darius and Frazier also have their ups and downs with Darius favouring an all out assault on the bank in contrast to Frazier's hope of a peaceful resolution to the hostage situation. As you can see there's plenty going!

'Inside Man' is a on the whole a thoroughly exciting and engaging movie and is refreshingly different to Lee's usual offerings, even if there are plenty of references to race/class (such as the ridiculous PSP video game). As always, Lee energises proceedings with some very nice camera flairs, which constantly add motion and background activity as the shot progresses. There's plenty of long takes (some of which caused me to question whether or not they were one single take) with the camera performing some wonderful acrobatics. The action scenes, especially as the NYPD first mobilise, always seem very “busy” with the viewer drawn into the bustle and excitement. The dialogue is snappy throughout with enjoyable exchanges between all the main characters. It's obvious from the manner in which the dialogue is delivered that script execution has been carefully thought out (a la Tarantino). The hostage scenario involving Russell and Frazier plays out well and never seems forced or contrived. The sub-plot involving Foster and Plummer is equally captivating and adds to the “why” factor in the robberies conundrum. If this heist was based on sheer monetary gains, with Owen and his crew simply stealing wad loads of cash, the plot would not have been as effective in keeping the audience interested.

As is the case with the majority of his movies, it's Denzel Washington who steals the show. He really adds depth to Frazier's character and skilfully portrays a man who is given a second shot to advance his tainted career. Exuding cool righteousness, while struggling to keep his temper under control, Washington's Frazier is a highly likeable character and without him the game of cat and mouse which he plays with Russell would not have been as convincing. Clive Owen also takes on a meaty role as the anti-hero of the movie, Dalton Russell. Owen, while appearing almost detached from reality during his performance, does add some warmth and depth to his character which enamours the audience towards him. Jodie Foster turns out another strong performance and really gets her claws out as super-bitch Madeline White, who wreaks havoc in the upper-echelons of society. Plummer, Dafoe and Ejiofor all add strong support and sub-plots. There's also a whole host of extras who play the hostages involved in the bank robbery. While not stealing any scenes they are passable, aside from a couple of questionable looks of fear in certain scenes. It's worth noting that the majority of the interrogation scenes were ad-libbed, which is a credit to all involved as they are wholly believable.

Although not containing any huge action sequences or shoot outs, it's the tension between Russell/Frazier and the intelligent plot which will keep the audience enthralled. The movie progresses at a very satisfying pace with very few instances of inactivity. As mentioned, there are a couple of mildly interesting sub-plots and while these provide a break from the intensity of the hostage scenario, they never interrupt the carefully planned game of cat and mouse between Russell and Frazier. As a result of Wasington/Owen's skilful characterisation, the audience ends up rooting for both the good guy and the bad guy, which is a break from the norm. It's a testament to both the strong cast (especially Washington and Owen) and the direction from Lee that this movie manages to create this divide wherein there are two “heroes”, both on completely opposite sides of the law. While obviously drawing heavily from New York crime dramas such as 'Dog Day Afternoon' and 'Serpico' (which is actually referenced along with two of the actors from 'Dog Day Afternoon' also staring), 'Inside Man' is original enough and contains some interesting plot twists to make it stand out from the crowd. Falling into the category of “one to definitely watch when it's on telly” (even if you've seen it a million times before), 'Inside Man' comes highly recommended.