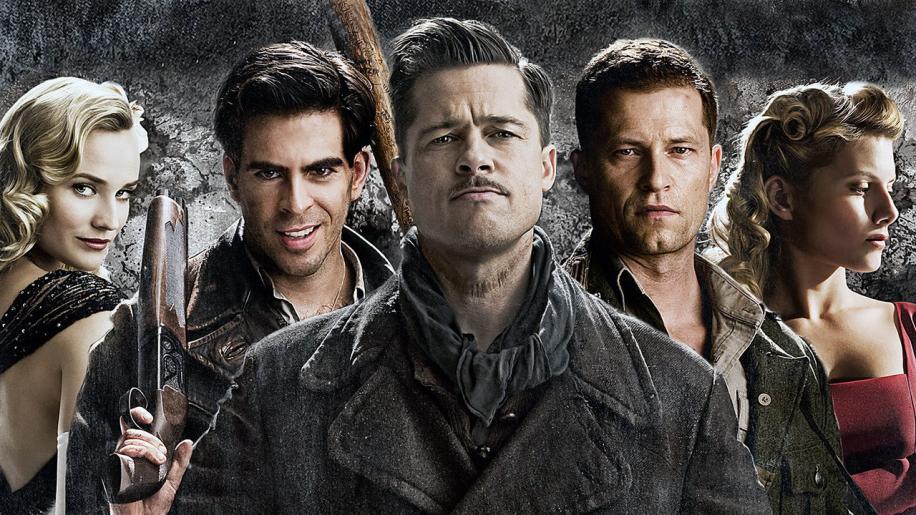 Normally, finding the name Quentin Tarantino associated with a movie would cause me to think twice about watching it. He's been hailed as a creative genius, but I've always found his movies a bit gory and unpleasant. Combine that with a title like 'Inglourious Basterds' and the images conjured up would make me walk the other way. But sometimes in life we have to overcome our own prejudices in order to avoid missing out on something special. Sometimes we also get a surprise that reminds us to never take anything for granted.
The hook that got me interested in 'Inglourious Basterds' was the fact that Rod Taylor appears in it, albeit briefly and under a barrow load of make-up. Some may remember him from the 1960 George Pal production of 'The Time Machine'. Okay, I knew that Brad Pitt had a starring role in Tarantino's latest offering but that was no big deal as far as I was concerned.
My prejudices went further in my expectation of lots of hand held camerawork and gimmicky editing, but after seeing the movie I can honestly admit to being impressed by Tarantino as both film maker and talented storyteller.

'Once upon a time, in Nazi occupied France ...'

From its fairy tale opening, the film leads us into a world of threat, danger, scheming, planning and execution.
It's nicely constructed, based on three separate story threads that converge towards the end. Each thread builds its own tension by working on the elastic band principle, stretching slowly until it eventually snaps - usually with explosive and shocking results.
The story is also very logically organised under 5 chapter headings, each with its own opening title.
We have the tale of Shosanna Dreyfus who witnesses the massacre of her family by SS Troops under the command of suave, polite, civil and ruthless Colonel Hans (Jew Hunter) Landa, played by the Oscar deserving Christoph Waltz. The scene between Landa and the dairy owner who is hiding the Dreyfus family under his house is electrifying. The ever so genteel Gestapo officer toys with the poor farmer who is caught like a rabbit in the headlights and forced to give away the hiding place. The only survivor is a blood spattered Shosanna who runs for her life as Landa takes aim with his pistol...


Next we have the creation of the squad of 'Basterds' - a kind of 'Dirty Seven', skilled in killing people but with some obvious literacy problems.
They are a group of American Jews dropped behind enemy lines, led by Lieutenant Aldo Raine (Brad Pitt), with orders to brutally murder as many Germans as possible and to take their scalps.

As this is a Tarantino film we do have some scalping thrust in our face so it's probably not a good idea to watch the Blu-ray while eating. Should Raine decide to let a German live to tell the tale and put the wind up the rest of the enemy military, he first carves a swastika on their forehead so they cannot hide what they did during the war.

The third thread concerns itself with Shosanna Dreyfus (Melanie Laurent), now older, living under an assumed name and running a Cinema in Paris she has been left by her Aunt. German war hero turned film star Frederick Zoller (Daniel Bruhl) takes a fancy to her and eventually persuades Dr Goebbels, the Nazi Minister for propaganda to hold the premiere of his latest masterpiece, 'Nation's Pride', at her cinema. Shosanna sees this as the perfect opportunity to wipe out the German top brass and take revenge for the death of her family.
Don't worry, I'm not going to tell anyone how it ends. Suffice to say, it's not what you'd expect from a normal World War II action flick but it would be on a par with seeing Steve McQueen in 'The Great Escape' actually leap that final fence on his motorbike and roar off towards the Swiss Alps and safety.

The whole movie is beautifully shot by cinematographer Robert Richardson and there's a heavy European cinema influence in its styling. There's no hint of the shakey cam that I was worried about, neither is there a preponderance of MTV style editing. This movie is a class act in all departments.

Brad Pitt turns in a very credible performance as Aldo Raine, scourge of the Nazis and doesn't come across as a Hollywood pretty boy in a uniform. Given his turn as Benjamin Button not so long ago, it certainly looks as if Mr Pitt is focussing on projects that will highlight his acting skills rather than just pay the mortgage.
Melanie Laurent is perfectly cast as the cold Shosanna, who tolerates the German occupation of Paris but wants no connection with the 'Master Race'. As the film moves inexorably towards its climax, we're with her and hoping for the success of her plan.
Ultimately though, it's really Christoph Waltz who dances off with the acting accolades. At times he makes us like Hans Landa, but then he very efficiently reveals the iron fist in the silken glove and can seem animalistic - something that causes a reaction in the pit of the audience's stomach. There's a great menace to his performance but it's never revealed right away. Excellent!

Just a word of warning, there is some gore but it's not always in your face. Those of us with the attention span of a ferret, who live on a diet of Coca Cola and Salt n' Vinegar crisps might need to stop fidgeting and focus their minds for more than 10 seconds if they want to have a hope of enjoying 'Inglourious Basterds'.
I found this movie thoroughly engrossing. From its opening scene, I wanted to see where it went and I felt it was a very rewarding experience. It's more of a good, satisfying three course meal than a light snack and those of us not used to such an audio visual repast need to know that the final act is well worth the wait.

My recommendation comes as someone who does not like the glamorization of violence or too much gore in a movie, but this is a picture well worth taking the time to watch simply as a masterclass in suspense and tension building.
Another movie to join my list of best films of 2009 - and a real eye opener for me.
Give the 'Basterds' a whirl!