"Each and every man under my command owes me one hundred Nazi scalps. And I want my scalps!" 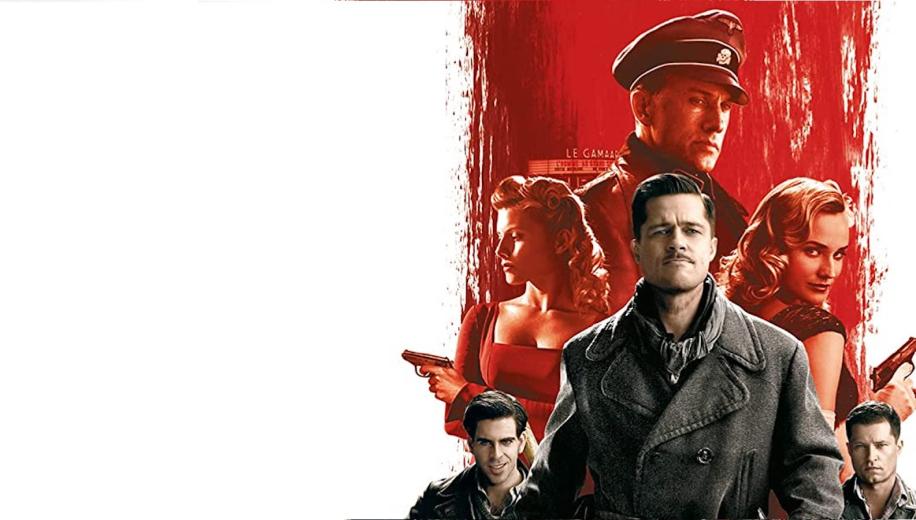 Perhaps he will always be remembered for the tremendous debut of Reservoir Dogs or the perfect sophomore masterpiece that was Pulp Fiction, but Quentin Tarantino didn't graduate to the big leagues until 2009, with his then-anticipated WWII effort enjoying a hefty price tag well over double what he had spent on any of his previous productions. It marked a transition for the man, into the rare echelons occupied by but a couple of directors now, like him and Scorsese, where they are afforded the luxury of making - largely unfettered by studio influence - R-rated (18 certificate here) features, for grown-ups, with practically blockbuster budgets in the $100 million range. Django Unchained, The Hateful Eight, and Once Upon a Time in Hollywood, all the best part of $100 million apiece, and all gleefully enjoying their harder R rating and, you know what, all massively successful too, with two of those amidst the Top 5 most successful 18 cert movies in history. And Inglourious Basterds arguably paved the way - it may have cost double what his previous films had, but it rewarded that gamble by doubling the Box Office return, a signal to the Studios that this was a horse worth backing, and backing big.

Generally enjoyed as a upper-middle range entry in Tarantino's pantheon of almost universally acclaimed features, Inglourious Basterds should actually likely be celebrated for giving us what we have now: a slew of bona fide examples of massively successful Big Budget feature films made for adults. That's something it feels like we haven't seen in decades. And, despite Once Upon a Time in Hollywood's 'controversial' revisioning on the tragic circumstances that could be argued to have changed the course of history in Tinseltown, Inglourious Basterds went even further a decade earlier, affording a similarly cathartic alternative history, the first of two of Tarantino's immensely satisfying how it should have gone down period flicks.

... it's not surprising that Tarantino would once again find an imaginative way to use language as a weapon

Undoubtedly, at the time, fans were hoping this would be just a straight-down-the-line Dirty Dozen flick (all the rage at the time, with the first Expendables around the corner), and it arguably is, but it is also far more, drenched in the director's trademark - seemingly innocuous - conversations which are steeped in ever-mounting tension and almost always crescendo into a bloody climax. Only Tarantino could have made ordering a glass of milk a point of tension, enlisting a superb cast of choice players to colour in the peripherals - his first of two great Brad Pitt pairings (really coming into his own in Once Upon a Time in Hollywood), and two memorable Christoph Waltz pairings.

Pitt undoubtedly shines in his role as the lead of a crack team of "Apache" Nazi hunters, but it's Waltz who steals the show, delivering the kind of quirky and politely menacing performance that understandably drew the attention of Bond producers when it came to casting their next Blofeld (even if that went all kinds of wrong, at least in Spectre). Diane Kruger is also superb in her role as a celebrated German starlet, but really this is secretly Melanie Laurent's movie, with her character the heart of the narrative. Tarantino does well to juggle a slew of different languages too, eschewing the "Hunt For Red October" gambit of just having everybody speak English (when they're clearly not), and embarking upon extended conversations in German, French and even - in the funniest scene - Italian. Indeed, one of the pivotal sequences (with a young Michael Fassbender no less) rests upon some very subtle language/gesture observation, and is an absolute thrill to watch. Of course, it's not surprising that Tarantino would once again find an imaginative way to use language as a weapon.

Eventually the director can't help but go full gonzo for a mad climax (something he's struggled to avoid, but for in perhaps Pulp Fiction and Jackie Brown) but as always - and perhaps even moreso given the rewriting of history - this one is particularly satisfying, and whilst Inglourious Basterds is often overlooked amidst some of Tarantino's more prominent masterpieces, it's a glorious romp that is well worth revisiting.

Inglourious Basterds comes to UK 4K Ultra HD Blu-ray courtesy of Universal, in what is presumably an identical release to their recent US 4K counterpart, boasting a subtly very impressive but only intermittently standout upscaled 4K presentation.

This is a presentation that looks wholesale better than ever before, but does so in a very nuanced, considered way

Inglourious Basterds may be a gritty Tarantino war flick, but it was hardly a low budget affair, with $70 million to play with and no epic setpieces to sap up the money in effects. Instead it looks authentically period and occasionally quite sumptuous. Translating that to a stellar native 4K rendition should have been a walk in the park, but the feature was made during that fateful period when a 2K DI was almost mandatory, leaving this an upscale, which undoubtedly still upsets people. The reality is that the upscale/native battle is of little consequence in the real world, with so many spectacular reference upscales out there, and, whilst Inglourious Basterds is not obviously one of them, it does trade in a number of standout shots (often close-ups or at last close-range sequences), a predominance of very subtly refined mid-range scenes, and a few longer shots which are bang average, but for in the HDR application, which is certainly not nothing. Every time you might decry that 'there's not much of an upgrade here' you'll be reminded of the prowess of even a merely very good 4K disc in an immaculate close-up, which revels in the facial details and background nuances. It's just not consistently wowing, so don't have those kinds of expectations. This is a presentation that looks wholesale better than ever before, but does so in a very nuanced, considered way.

HDR and WCG of course make a frequently more visible difference, lending healthier skin tones, warmer environments replete with vibrant red Nazi sashes, and strong black levels, but even there the refinements are frequently eminently subtle, suddenly rendering a much more intrinsically deep and bold image with some brighter lighting offering impressive contrast. It may not be overtly demo, but the lack of verve and pomp belies a very polished 4K rendition. So sit back and enjoy a very healthy, refined, and pleasingly rich 4K video presentation which does best the Blu-ray by some considerable measure, making this comfortably the best way to watch it.

Dialogue remains firmly prioritised across the frontal array, afforded clarity and coherence throughout, whilst effects - which take in a spectrum of atmospheric nuances, from creaking floorboards to the hollow crack of a baseball bat, to clinking glasses and humming projectors - get fine dissemination across the surrounds. Booming gunshots emphasise the sparks of violence, with a decent LFE underpinning. It's actually a very good track, perhaps even excellent, even if it is all too easy to disregard it as being a decade old and not privy to an Atmos upgrade.

Universal's 4K release of Inglourious Basterds not only ports over all of the not insubstantial extras from the original Blu-ray over to the 4K disc proper, but pops a cherry on top in the form of a new hour-long Interview with Tarantino.

Beyond the new Interview, there's the old Roundtable, a slew of archival Featurettes, Interviews, Galleries, Deleted Scenes and Trailers. It's a comprehensive selection.

Inglourious Basterds was Tarantino's first dip into rewriting history, providing an immensely satisfying voyage into taking down the Third Reich, with a great cast - none of whom were previous regulars with the director, but many of whom would return for more. It's an often underrated, overlooked entry in his colourful catalogue and a whole lot of tension-packed fun.

... often overlooked amidst some of Tarantino's more prominent masterpieces, it's a glorious romp that is well worth revisiting

Universal's 4K Blu-ray release of Inglourious Basterds, on the face of it, doesn't appear to do anything much new and special, working with a 2K upscale and the same old soundtrack from the Blu-ray, but it's a very refined 4K HDR presentation and it's still a standout lossless 5.1 track, and it's nice to have all the old extras ported onto the 4K disc itself as well as something new. Tarantino fans really shouldn't hesitate to add this to their collection.