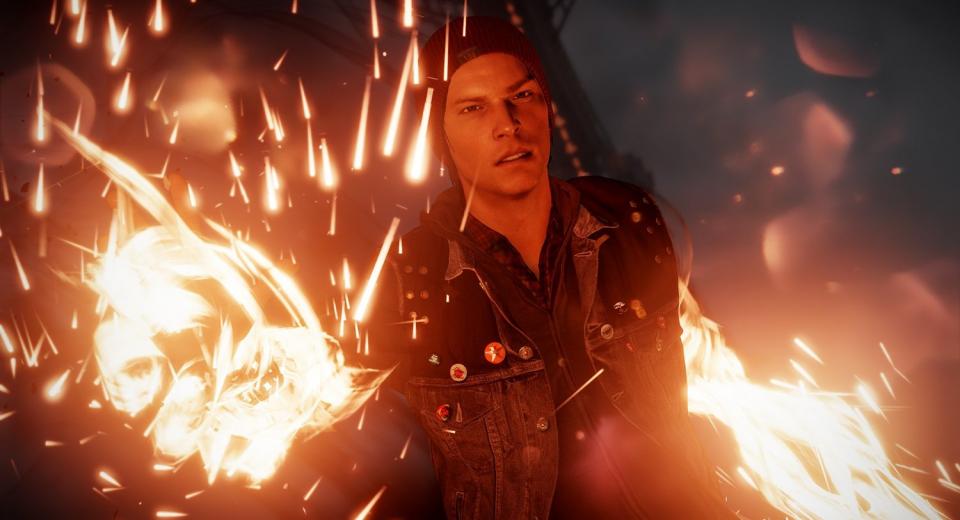 Second Son ramps up the intensity and takes Sucker Punch to where they want to be; amongst the very best games only available on Sony’s console.

It has an air of class, a feel of high quality and leaves you with an overall sense that this game has been given the treatment it well and truly deserves. The two words "production costs" had little bearing in the development cycle for the latest inFAMOUS. Considering the previous two titles weren’t met with the greatest of receptions, it’s a brave move too.

Whilst the first and second releases (both of which followed the antics of lightning wielding Cole MacGrath) were great in their own right, they never really tapped into the same audience that some third person action titles did. But these things take time and this is the result.
Following on several years after the events which unfolded in New Marais, the game switches location to Seattle where small-time criminal and rebel Delsin Rowe finds himself in possession of a set of new and potentially deadly powers.

Much like most Conduits, Delsin acquires his new abilities by accident, absorbing them following coming into contact with a prisoner who harbours them. After an initial crisis and coming to terms with these powers, he soon goes after Augustine - who is locking up Conduits (or Bio-Terrorists as she labels them) - in order to stop her and heal those who she has injured. For the most part, the story within Second Son is forgettable and a bit wishy washy. There are rare sequences which are well scripted, and are segmented between ones which accelerate the story far too quickly and sometimes break the pacing of the game. The script is good and is acted perfectly by all involved, whilst man of the moment Troy Baker (voice of Joel from Last of Us and Booker in Bioshock Infinite) does an excellent job of making Delsin a brilliant lead man.

He is, however, one which will divide opinion - with some sure to find him annoying and others viewing his antics as quite entertaining; the latter sentiment is the one I found myself to be in agreement with. Sure, he is cocky and arrogant, but bear in mind he has just acquired powers which allow him to control smoke and neon, so it’s bound to be reflected in his attitude and dialogue. Whether or not you like Delsin, you can’t deny that he has been sublimely brought to life, and the same can be said for the entire cast. Their facial animations and levels of detail are beyond anything which you have seen before on Sony consoles, even from the later PS3 games. This is now the benchmark when it comes to realising main and supporting characters. You can’t help but admire the work Sucker Punch has put into this aspect of the game.

The same can be said for the entire world for that matter, as Seattle has been given the highest of service and looks fantastic. Whether it be watching cars slowly drive over puddle-covered roads, or staring in awe at the far distance when perched on top of a building, it’s simply staggering. This game was always going to look good - as seen in the previews - but this is something else. The in-game version of Seattle certainly isn’t the biggest open-world city you will ever see, but it’s most possibly the most detailed you will come across.

Sure he's cocky and arrogant but, give the powers he's just acquired, it’s bound to be reflected in his attitude and dialogue. The major ingredient to this experience is the power set which Delsin is equipped with, and the solitary ability to harness electricity is now long-gone. Avoiding spoilers, you eventually possess four powers which can be interchanged at will when you come across a point whereby you can absorb them. The two you will know about, smoke and neon, are the first two and act as a great starting point for your adventures.

The main criticism of the other powers is that they come far too late and you don’t get enough time. They’re cool, that’s for sure, but they could have been introduced earlier to make them feel like a more integral part of the experience. Nevertheless, the controls are tight regardless of which power you are using. The last two games were always a case of throwing you in the deep end with your power and telling you to hope for the best, usually resulting in the non-stop blasting of everything with your lightning mitts. The same can be said here too, and you find yourself knee-deep in enemies - named DUP soldiers - who also have their own set of stone abilities which were granted by Augustine. It adds to the variety as they can make tough work of being despatched, mixing up combat with machine guns and flinging shards of rock at you.

When things get intense however you can’t help but feel that the enemy always has the upper hand over you. You’re a super-powered badass but at times it seems this counts for nothing when you’re surrounded by DUP soldiers. Damage is healed swiftly thanks to your powers, and in some instances can be replenished upon absorption, but once the bullets start flying you can find yourself dead all too easily. Thankfully the snappy game reloads allow you to get back in the action swiftly, but some of the fun of just jumping in all powers blazing has been taken away from the series.

Much like its predecessor, Second Son is defined by a karma system which changes the city and the story depending on how you chose to act upon acquisition of your Conduit powers. You are given the choice to be a Conduit and act like the Samaritan, or you can be the ultimate Bio-Terrorist and take down all in your path.

Whichever path you take dictates the missions available to you and also how you can upgrade your powers, both of which make a difference to the experience. The variation in power upgrades is particularly noticeable, for instance, a good power upgrade allows you to heal upon dashing through a vent whilst the evil version grants you the ability to dash quicker and over a greater distance. Sections of the city are open to destruction too, which are DUP controlled and constructed buildings. With a volley from a smoke bomb or barrage from neon blasts, towers and walls come crumbling down and do so with beautiful animations. You can see individual pieces fly off and tumble to the ground and the satisfaction of wreaking havoc is so high you won’t be able to stop.

The structures stay destroyed too, which is a nice touch, so you won’t find them re-built once you re-visit the same section again at a later date. The Dualshock 4 gets a nice workout, as it rightly deserves, with the touchpad being exposed to the best integration it has seen to date. A press of the touchpad is used to absorb powers as you come across them, whilst it also allows you to interact with the world in other ways, such as opening prison cages and menu navigation.

The speaker plays a significant role too, with phone communications emanating from the pad, adding another layer of depth to the whole game. Even the LED indicator is utilised, by changing colour depending on your karma level and also during sequences such as spray painting.

For everything that makes Second Son an excellent game, you can’t help but feel that the mission structure and objectives let it down a little; this is the main area where the game suffers. There are no really memorable moments, and this is a shame as the story isn’t as strong as the ongoing banter between MacGrath and Zeke in the previous two games. Whilst mucking around in Seattle may be thrilling, most missions boil down to going to an objective, killing a few guys, before moving onto the next and doing the same thing. A couple of missions stand out later on, but there is a lot of repetition throughout, particularly in acquiring shards once you obtain a new power.

You do however get value for your money when it comes to replay value, as Second Son has much more to it than its campaign mode (which you can play twice in both good and evil modes). There are a host of side-missions to complete and collectibles to find, objects to destroy and walls to tag with stencil art, all of which are in significant numbers. Those who pre-ordered get access to the Cole's Legacy DLC which allows you to find out what happened after the events of the second title. There’s also the free day one DLC, Paper Trail, which will see periodic missions delivered into your game which are also interactive experiences and will give you small tasks to complete on your computer.

Second Son is an amazing game both visually and mechanically. The fact we can play games that look as good as this on a home console is astonishing and a sign of greater things to come as the PS4 - and developers - get into their stride. Whilst it may become a touch repetitive at times, and the story leaves a bit to be desired, you can't deny that this is still an entertaining game and one that is fully worth your time and money.

The balance between the four powers and the controls are brilliant, and the amount of extras there are to complete beyond the main story gives you heaps of value, whilst the potential for future DLC is something you must consider too.

It's the mission structure and design that slightly hold this game back in the end; if Sucker Punch had gone the extra mile to mix it up a little and put in a few more imaginative missions then this would be the perfect game. But don't let that put you off as it is still one of the best looking and most entertaining titles you can get on the PS4.