"Hold on to your potatoes!" 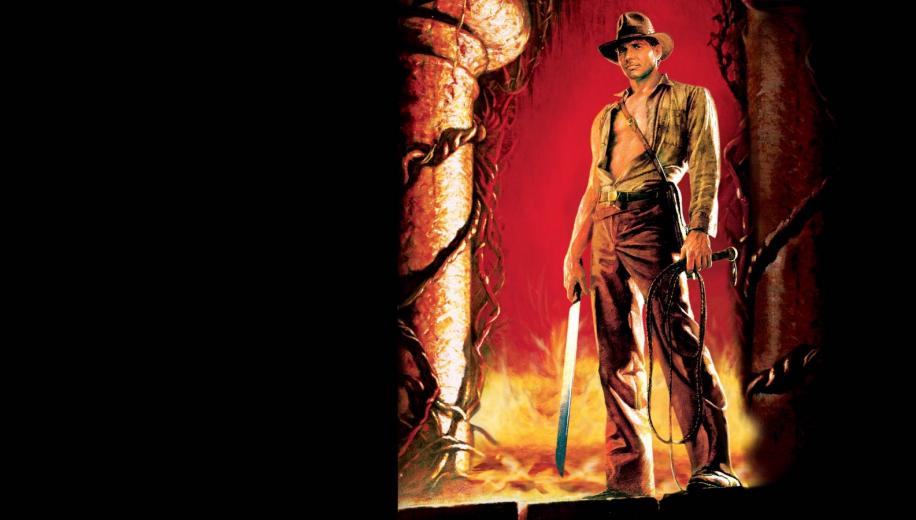 The Temple of Doom Review

The fabulously exciting and surprisingly dark Temple of Doom is a veritable roller-coaster ride of a sequel.

After the unexpectedly insane Box Office success of Raiders, of course a sequel was inevitable, with Lucas - in trademark form following Star Wars - talking it up like he had a trilogy planned, but actually not having much of a clue where to go next. The rush to push out a successful second entry was influenced by a number of factors - not least the fact that both Lucas and Spielberg were in a darker place in their lives than during Raiders ﻿(undoubtedly a double-divorce will lead to the necessity to involve scenes of hearts literally being pulled out of still-living bodies). The end result could be argued to be little more than the outtakes from Raiders, stitched together with a threadbare plot that barely explains why its protagonists travel from China to India and get involved in a demonic child slavery cult to recover some sacred gems to restore health and prosperity to a... village.

There is merit in this argument - key set pieces were leftovers from Raiders, although not due to quality, but arguably due to budgetary constraint, with the opening Shanghai sequence, the plane set piece and the iconic mine cart chase all from the original Raiders script - and there's no doubt that it jumps to the end in record time, and then just dives straight into action thereafter, with the mid-movie 'trap' actually leading to what is, essentially, the first of a succession of end-of-movie set pieces. Despite all of this, Temple does work near-perfectly as the continuing adventures of Indiana Jones, again evocative of the 30s and 40s serials that inspired this franchise, jumping right in with another exciting outing for the globetrotting Indiana Jones and landing him in a relentless succession of fabulously realised and thoroughly imaginative situations.

... Temple does work near-perfectly as the continuing adventures of Indiana Jones

The story perhaps ill-advisedly goes wild on false stereotypes of age-old India, going for subtle humour but missing the mark (from human sacrifice to chilled monkey brains, it should be rather obviously almost farcically hilarious, yet still it can and does offend), however most people will hopefully be able to move past that in favour of the basic evil villains kidnapping kids theme, particularly with a perhaps surprising amount of demonic possession, voodoo blood-magic, and all-round dark fantasy thrown into the mix this time around. The comedy is still great, and pretty sharp, from subtle touches like the name on the plane Indy escapes in, to the more outlandish stuff like the ludicrously over the top banquet which is just a succession of disgusting dishes served up culminating in... frozen monkey brain! And despite Kate "the trouble with her is the noise" Capshaw being a bit of a screaming diva in terms of character design, she shares some fabulous chemistry with Indy, particularly when he's trapped in a slowly-closing-with-spikes room and she has to face her own I'm A Celebrity Get Me Out of Here moment to save him.

Williams' score is still on-point, and there's no denying that the set pieces are epic, and not just those which didn't make it to Raiders, with the rope bridge sequence arguably one of the best - if not the best - set pieces in the entire franchise. Ford reminds us once again why he is and will always be the only Henry "Indiana" Jones Jr. and, even as the darkest of the entire saga - dark enough to propel the MPAA to subsequently create the PG-13 rating - it's still a bloody good romp and a hell of an adventure.

The Temple of Doom 4K Video

Detail continues to impress on the second film in the set, right from the get go, with even the glitzy opening credits holding up quite well; facial textures and clothing weaves impressively rendered once again, and only a handful of fitfully soft shots across an otherwise gloriously rendered landscape. There's a fine sheen of grain, which remains light and pretty damn consistent across the duration, and the composite shots don't tend to stand out as much as on the first - and particularly third - movies, perhaps because they were shot more cleverly, or perhaps there were less modern trappings (aircraft being a curse for the third entry in this department).

WCG and HDR - along with Dolby Vision - only double your enjoyment of the visuals, rendering gorgeous skin tones, warm - but not hot - stylistic overtones, rich browns, vibrant golds, lush greens and deep and inky blacks, allowing for some fabulous shadow detail. The red/orange-blessed temple scenes are wonderfully deep, with little sign of bleeding despite the overwhelming tones inflicted. Although Temple never had the slightly awry revisionist colour issues that were applied to Raiders on previous incarnations, it still feels like it's been lovingly handled here and really gloriously rendered. Sure, it may not be perfect, but it's a perfect showcase of outstanding remastering work for sure, leaving this undoubtedly the absolute best Temple of Doom will ever look.

The Temple of Doom 4K Audio

Indiana Jones and the Temple of Doom's 4K Blu-ray release follows suit from Raiders to deliver a surprising - but welcome - upgrade in the form of a superbly engulfing Dolby Atmos track, with the High Definition 3D Object-based immersive audio sweeping you up right from the opening song and dance number, and never letting up across the duration.

Dialogue takes priority, as per, whilst effects enjoy plenty of LFE-boosted fisticuffs, gunshots, the thrum of ricochets off the giant cymbal, overwhelming aircraft engine noises, rushing waters, slithering snakes, creepy insects, bustling, chanting tribes, out-of-control mine carts and gnashing crocodiles. There isn't always quite as much material for the overheads, but they do get in on the action, and there's no denying the dynamics, nor the superior sound design which brings the soundscape alive all around you. A lot of effort has been put into this restoration, culled like the first movie from the original audio elements, and it's paid off here. Of course, Williams' score not only holds it all together, but still remains the absolute headlining act on this track, defining it and giving it spirit, tension, excitement, danger and rip-roaring adventure throughout. It's fist-pumpingly fabulous.

The Temple of Doom 4K Extras

Indiana Jones and the Temple of Doom was perhaps somewhat jarringly darker in tone than the first movie, doubling down in terms of fantasy and demonic possession, and providing little build-up to what is essentially a succession of exciting set pieces that barely let you up to breathe. It's a hell of a ride though, and even if it doesn't quite hit the all-time greatest sequels list, it's probably sneaky enough to hit the highest echelons of the all-time greatest prequels list.

... a succession of fabulously realised and thoroughly imaginative situations

Other reviews from the collection: Indiana Jones and the Raiders of the Lost Ark 4K Blu-ray Review.

Indiana Jones and the Temple of Doom is released by Paramount as part of The Indiana Jones 4-Movie Collection, available on 4K Ultra HD Blu-ray™ and on Digital to Download & Keep from the 7th June.