Indiana Jones and the Kingdom of the Crystal Skull Movie Review 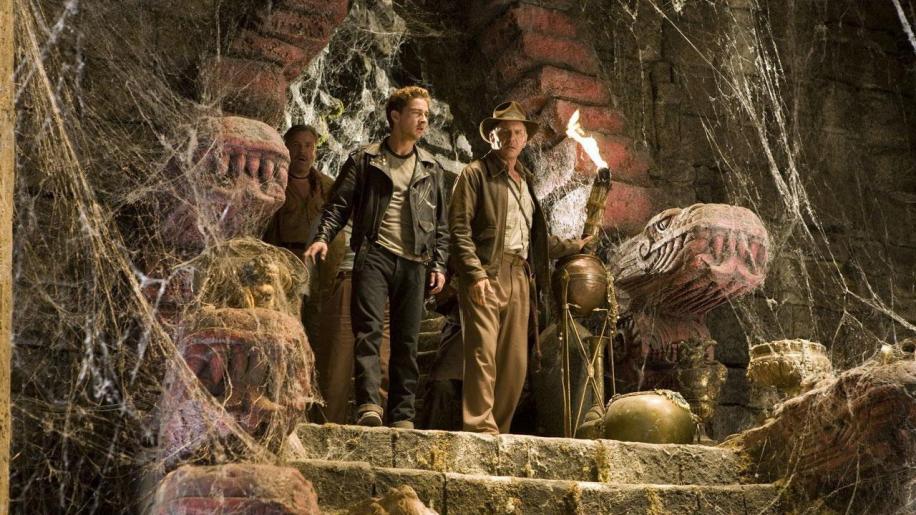 Indiana Jones and the Kingdom of the Crystal Skull Movie (2013)

Having originally reviewed Indiana Jones and The Crystal Skull as a movie, and finding that my opinions have changed little since that review - what follows here is my original review written immediately after returning from a preview.

Cards on the table time. At the age of 11, my Dad took me to the cinema to see a film. That film was ”Raiders of the Lost Ark. I was subsequently there for the whole series at the cinema, and have watched them many times over the years on DVD.


When it comes to the series I am firmly in the camp of enjoying ”Temple of Doom” the most, followed by ”Raiders of the Lost Ark” with ”Last Crusade” a very distant third. However, when it came to ”Indiana Jones and the Kingdom of the Crystal Skull”, I have to admit to having reservations. Being in my....errrrrrr.....late thirties I am the prime consumer for the “nostalgia” market that seems to be engulfing the local multiplex over the last decade or so. First Star Wars, then Batman, then Superman, and now Indiana Jones have made their recent comebacks - all competing for the disposable income of a generation desperate to reconnect with their cinematic youth.


The resurrection of such icons, however, can be fraught with danger. Batman reinvented the film series by taking him back to his origins and aimed for the hard core comic audience, succeeding in the process. Superman Returns took a more respectful, elegiac approach to its subject and whilst that appealed to fans of the original like myself - it wasn't a wide enough audience to achieve commercial success. Star Wars went the opposite way, aiming to attract a new audience and succeeding commercially whilst alienating the long term fans.

So, what approach has Spielberg taken with the latest instalment of the Indy franchise. Well, to my great surprise he has basically remade Raiders of the Lost Ark almost shot for shot. And whilst that may not have worked 26 years ago, as a fourth entrance into the franchise it works extremely well indeed.

The plot, however, is probably the weakest element of the whole enterprise. Indiana Jones gets caught in a race for the titular skull which, it turns out, is actually alien in origin. Although this being Spielberg, the explanation for the aliens is not quite as clear cut as you may think.

The action opens in Area 51 where he battles against Cate Blanchett's agent Irina Spalko, who is aiming to return the skull to it's original resting place in order to harness the incredible power that will thus be unleashed. She will then use it for unexplained nefarious plans.

Indy, of course, is racing against her to also gain the prize but his ultimate aim is far more noble than the Russian. Along the way, Indy meets his son Mutt (Shia Lebouf) and constantly crosses swords with old war colleague Mac (Ray Winstone). Completing the main cast is returning love interest Marion Ravenwood (Karen Allen) and new character (and old friend of Indy) Professor Oxley (John Hurt).

The cast is extremely well balanced, with the older characters counterpointed by the youthful exuberance of Lebouf. Ford himself is quite clearly relishing reprising the role of Indiana Jones, and fits into the role as if he had never left. Yes he is clearly older, but to be quite honest he looks extremely good for his age and the action that he is involved in is usually fairly easy to watch without too much suspension of disbelief. Lebouef, as well, puts in a superb performance as Indy's son. Lebouef has very much been mentored by Spielberg and it is very easy to see what the director sees in this young actor. There is a nice little gag at the end of the film that points towards the possibility of Leboeuf eventually taking over the lead role and after his performance in this film it is actually not quite the sacrilegious idea that it might once have seemed.

Sadly, the female characters fare less well. The feisty, sparky Marion that we remember from the original film has almost entirely gone here. Apart from one scene where she takes control of an amphibious jeep, she seems to spend most of her time simpering with lovestruck fascination at the renowned archaeologist. This is not the character that we recognise from the earlier film, although in the wider context of this film it is just about a bearable performance. What isn't bearable, though, is the quite awful performance of Blanchett who is quite simply terrible in her role. Indy's main foil needs to be a really strong character - someone with menace and capable of appearing threatening and clever, always one step ahead of Indy until the end when the Professor gets the upper hand. Sadly, here she is not a worthy adversary merely looking silly in a faux Russian costume and with a terrible accent.

Admittedly, it is not entirely these two actresses fault that their roles are so bad. As Jessica Rabbit once famously said “I'm not bad, I'm just drawn that way” and Marion's character's flaws are entirely down to the way they are written. With Blanchett, though, I am just not sure - I just think she is not capable of projecting the kind of menace needed.

At the beginning I said that this film is almost a shot for shot remake of Raiders and this is something that hit me time and time again when watching. The opening scene involves Indy battling against traps, and then action switches to him teaching in the University with the Dean (Jim Broadbent) interrupting him in almost exactly the same as Marcus in the original.

Then we have the deciphering of an ancient clue to the whereabouts of the treasure before they go off in chase. There is a car chase in almost exactly the same place here as it was in the first film, including some similar truck gags (this time he goes through a truck instead of underneath it), and even the fight around the airplane is reprised, only this time it is in a sea of poisonous ants.

Finally, we reach the conclusion and the bad guys are wasted in a similar way to the original. This sounds almost like lazy filmmaking - but in the hands of Spielberg this is anything but. He enthuses this film with the kind of energy someone like him really should have left behind ages ago. Indeed, in the hands of anyone else this film would have appeared like a lazy remake - but Spielberg is on top of his game here. He moves his camera with brave and broad moves, bringing a kind of kinetic energy to proceedings - which keeps the film moving along at a brisk place. Remember his jaw dropping camera move as the characters escape the invasion in War Of The Worlds? There are many such moments here. Whether it is a jaw dropping moment near the beginning of the film, which ends in a bad guy taking a dive through a plate glass window - or a car chase through the vast hanger of Area 51 the flair that Spielberg shows always manages to lift this above the average film.

Sadly, the female characters are not the only thing that let the film down. There are two truly disastrous scenes - one which involves a Tarzan rip off, and the worst of the lot - the use of a fridge to escape a nuclear blast. These are serious missteps but luckily just manage to avoid derailing the film. But it is a close thing.

Many people also seem to have a problem with the alien aspect to proceedings. Of course, this is a direct contrast to the religious supernatural element of the other films, and I can see why people don't like the introduction of a different McGuffin. However, in the fifties communist era where the film is set I can see why this plot device was chosen. It is not entirely successful, admittedly, but it is a clever rewriting of an old legend and at least attempts to inject some fresh blood into the franchise.

So, the ultimate question is whether Spielberg has succeeded in reinventing a much lover cinematic icon. On the balance of it, I think the answer has to be that he has. The tone of the film is much more like the original than any of the other two sequels, and the action and humour can sometimes be breathtaking. The film has a very old fashioned approach to film-making - relying on old fashioned stunt work and employing minimum CGI work. Yes, some of the effects are poor - but I do feel this is deliberate, making the film fit in more stylistically with the original trilogy. I am not going to rate the film in with the other three, but the simplest question to answer is “Would this film fit on a home cinema enthusiasts shelf alongside the other three films?” The answer to this is a resounding yes. The film is Indiana Jones in spades, and for this we should be grateful. An icon is back, he hasn't changed, and he just about pulls his latest caper off. However, I truly do feel that trying to bring him back again would be a very bad move. At this point, the trilogy has become a quadrilogy. That is where it should stay.