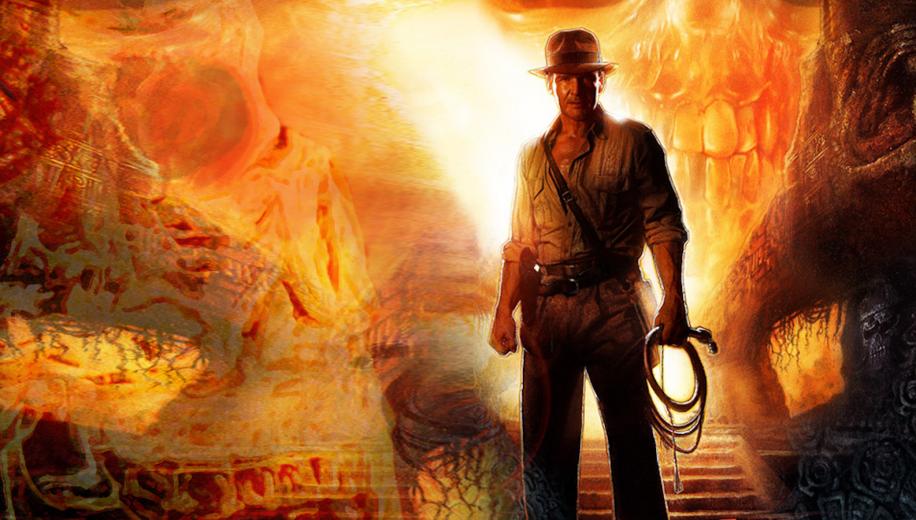 The Kingdom of the Crystal Skull Review

Easily the outlier in an otherwise near-perfect franchise, the fourth Indy outing proved - at least 13 years ago - that Ford could still pull it off, but otherwise nuked the fridge with wild CG abandon.

Last Crusade already teased that Ford's Indy might be getting a little old for these adventures, but almost 20 years later he returned to the role for the Crystal Skull and, surprisingly, managed to actually do pretty damn well in terms of the stunts, the fights and the performance. He reminded audiences why he is and will always be the only Indiana Jones, and delivered one of the few fully-invested performances in his filmography from the last two decades. Sure, he was a bit creaky around the edges and some of his lines were a bit clunky ("W-ubble-u's"), but he pulled it off.

The trouble, it appears, was every other damn thing. Even on paper, it's an ill-advised idea. Yes, Raiders enjoyed some dark sorcery in the form of the Ark, Temple involved magic stones, and Crusade had the immortality-giving Grail, but somehow aliens didn't feel very Indy. In fact, they might have been able to halfway pull it off, but at least apply a modicum of subtlety. Crystal Skull bandied around funky-looking aliens from scene one, dangerously hitting parody levels for its ultimate "Crystal Skull" shenanigans. Go find Atlantis, people.

The missteps in this film were pretty comprehensive and pretty unforgivable

The missteps in this film were pretty comprehensive and pretty unforgivable. The story was littered with the usual plethora of thrilling stunt-driven setpieces, and frequently went deliriously over the top, but with CG came the curse of excess, and Spielberg appeared to just want to double-down in this respect. Have someone swinging through the trees? Sure. Do the Tarzan thing? No, too far. Have a CG gopher pop up at the start of the movie? Sure. Have them as a recurring motif throughout the movie? What, did they have some CG left over that they just had to use up before its Best Before Date? In fact, even the frequently, rightly, lambasted "Nuking the Fridge" moment is surprisingly tolerable, until the point where he rolls out and sees a... CG gopher. What were they thinking? Were Porgs unavailable at the time of filming?

Casting - and characterisation - was also all over the shop this time out, with the lack of Marcus, Sallah, and Henry Jones Sr, noticeable, and their replacements... questionable at best. Sure, it was nice to have Karen Allen's Marion back, but only to a point, and Ray Winstone, Cate Blanchett and John Hurt feel like they're out of some other movie, perhaps an outright spoof. Even Pat Roach's replacement, Igor Jijikine, looked far too comical by design, making his and Blanchett's villains too pantomime even for a serial adventure like this. Shia LaBoeuf? Well, there's probably a world in which he might have been able to take over the mantle, but it's not this one.

Despite all of this, Crystal Skull at least enjoyed the commitment of its lead - not wholly unlike Die Hard 4.0 (at least in comparison to the fifth Die Hard, it was weaker than any before it, but a whole lot better than the one with Willis on autopilot) - and that carries it through many of the missteps. There's no denying the fun in having more Ford/Indy adventures, even lesser ones, and Crystal Skull at least meets this criteria. It does, however, put a somewhat impossible burden on the fifth film to offer the satisfying conclusion to the saga that this one simply could not provide... Maybe James Mangold will pull off a Logan for it, but arguably we already had a perfect 'Last Crusade' way back in 1991.

The Kingdom of the Crystal Skull 4K Video

Lavishly remastered, and lovingly restored with extensive work done to - almost imperceptibly - clean up and enhance some of the effects shots, the Indiana Jones set - much like the Back to the Future 4K Box Set - is an absolute joy to revisit, earning a new lease of life on the format, leaving it easily the best it has ever looked.

Really, Crystal Skull continues to have impossible standards to meet, even when it comes to this 4K release. Raiders of the Lost Ark looks almost flawless in 4K, Temple of Doom's 4K presentation somehow, somehow, manages to look even more impressive, and Last Crusade's 4K image - despite a few moments - really isn't far behind them at all, and frequently looks utterly spectacular. Unfortunately, key to all three of these was arguably the period they were shot in and Douglas Slocombe's fabulous cinematography, as well as, of course, the mainstay of practical effects. Still Janusz Kaminski does a damn good impression, and there is a nice texture to the piece which leaves it frequently looking the part, even if those frustrating CG moments stand out like a sore thumb. Again, not the fridge flipping a Fast & Furious number of times before it finally lands, but actually that bloody gopher which pops up after.

Still, forgiving all that, it's an unsurprisingly very detailed image, which laps up the lines and wrinkles on Indy's face, revelling most in his textured, lived-in feel even if there's little of the same in some of the caricature villains. Environments too - again despite looking less authentic this time around - enjoy some veritable nuance, and brief spurts of atmosphere, with softness relegated to Allen's visage and an otherwise largely crystal clear image that wields a fine layer of textured grain intentionally applied to keep this production in line with its predecessors, as far as could be achieved at least.

WCG and HDR - along with Dolby Vision - round out and consistently embellish and enhance the image, gifting it some wonderfully rich woody tones, gorgeous green jungle foliage, as well as the glow and pop of magical crystal alien skulls - if that's something we ever needed to see. Fiery bursts are impressive, and even the mushroom cloud sequence has scale and depth to it, with black levels inky and flawless. It's simply not a gorgeous demo restoration piece like its predecessors, Temple remaining the standout, but that doesn't mean it isn't a tremendous presentation that's innately hard to fault.

The Kingdom of the Crystal Skull 4K Audio

Indiana Jones and the Kingdom of the Crystal Skull's 4K Blu-ray release, like the rest of the films in the set, enjoys a rather decent upgrade in the form of a boisterous Dolby Atmos track, with the High Definition 3D Object-based immersive audio making the most of the frequently over the top outing.

Dialogue comes across clearly and coherently throughout, getting keen priority across the frontal array, whilst effects get some of the biggest moments of the entire series - not least the atomic blast - with rocket sleds, explosions galore, jungle chases, growling bikes, rumbling trucks, rattling machine guns and the OTT conclusion all providing some thoroughly immersive moments laced with a healthy amount of LFE. Williams' score is still a decent addition, throwing back to the earlier chapters even if it doesn't always finding a voice of its own, and the surrounds get in on the action for the duration, with even some overhead flourishes. It's a great track, perhaps unsurprisingly too given the fact it's the most recent of the outings.

The Kingdom of the Crystal Skull 4K Extras

Indiana Jones and the Kingdom of the Crystal Skull is frequently - justifiably - omitted as part of what is an otherwise basically perfect trilogy. It's got great moments, and Ford proves he's still got it as Indy, but there are some really clunky decisions, whether in terms of casting or in terms of Spielberg's over-zealous flourishes (CG gophers, not just aliens, but bloody crystal aliens, with psychic powers too). It'll be interesting to see if they can give the franchise a more fitting send off with next year's fifth entry.

There's no denying the fun in having more Indy adventures, even lesser ones, and Crystal Skull at least meets this criteria

Other reviews from the collection:

Indiana Jones and the Kingdom of the Crystal Skull is released by Paramount as part of The Indiana Jones 4-Movie Collection, available on 4K Ultra HD Blu-ray™ and on Digital to Download & Keep from the 7th June.