Twenty years old and looking better than ever 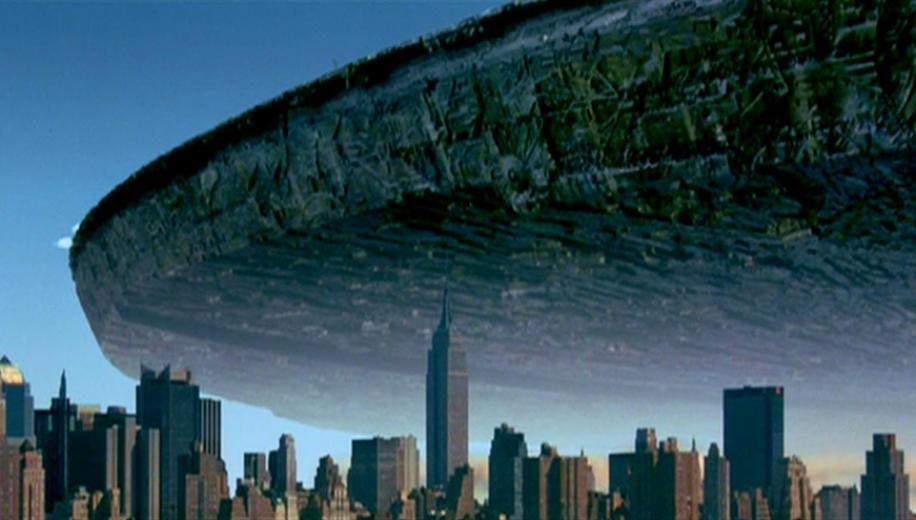 Twenty years on and we return to one of the greatest ever high concept summer blockbuster films, the 1996 hit Independence Day.

It's hard to believe it's really been that long since Roland Emmerich and Dean Devlin unleashed their huge spaceships over the major cities of the world and took great pleasure in destroying famous American landmarks. Until the events of 9/11 made such high profile destruction both painfully real and decidedly unfashionable, no-one did it better than Emmerich. Independence Day is pure cheese but done with enough charm to overlook its obvious flaws and the film retains a genuine sense of fun. The film cemented Will Smith as a proper movie star and, along with Jurassic Park, made Jeff Goldblum an unlikely box office draw. The majority of the cast sensibly play it straight, with Bill Pullman getting to deliver some great speeches whilst Smith and Goldblum fight over the best lines. Brent Spiner has fun as a mad scientist and the only missteps are some of the cliched supporting cast like Randy Quaid's drunk pilot, Judd Hirsch's Jewish father and Harvey Fierstein's gay boss.
Whilst Fierstein in particular really dates the film, the effects have held up surprisingly well. Despite the advent of CGI a few years earlier, the filmmakers wisely chose to use practical effects wherever possible, only using computers to create the force fields and to composite shots. As a result there's a pleasing sense of realism to the effects that more modern filmmaking techniques seem to have lost. The film's plot borrows heavily from a host of different sources, most notably the War of the Worlds and the TV series V but by underplaying the alien invasion aspects in favour of a more traditional disaster movie narrative structure, the film retains a degree of internal logic that is sadly missing from its sequel. The extended cut adds a few more character beats and whilst not necessarily superior, it remains our preferred choice. However whether you watch the theatrical cut or the extended cut, there's no denying that Independence Day remains a glorious summer blockbuster. Independence Day was actually shot on Super 35 and 20th Century Fox have fully restored the original negative at a resolution of 4K, which forms the basis of this new Ultra HD Blu-ray release. The disc uses a resolution of 3840 x 2160p and is presented in its correct 2.39:1 aspect ratio, with 10-bit video depth, a Wider Colour Gamut (WCG) and High Dynamic Range (HDR), and is encoded using the HEVC (H.265) codec. We reviewed the region free US Ultra HD Blu-ray release of Independence Day on a Samsung UE65KS9500 Ultra HD 4K TV with a Samsung UBD-K8500 Ultra HD Blu-ray player, although the film is also available on the format in the UK.

Independence Day was shot using the Super 35 process which is a format that removes the optical audio tracks at the edge of the frame, resulting in a larger area to capture the image on. The greater the surface area for the image captured the higher the resolution and, as a result, you can blow-up and mask the Super35 frame to 2.35:1 for theatrical distribution. The benefit of this is two-fold, it allows directors and cinematographers to shoot with spherical lenses rather than anamorphic lenses, which provides greater freedom and it also allowed for more flexibility when creating home video versions of the film back in the days of 4:3 TVs. The downside of this process is that film grain tends to be more noticeable because the image has been blown-up prior to being printed for anamorphic projection.

This new Ultra HD Blu-ray release of Independence Day is based on a restoration of the original negative that was then scanned at 4K before being graded for HDR. The result is an image that looks fantastic, with a definite increase in perceived resolution and a lovely film-like quality. However the film grain is very noticeable and whilst it’s supposed to be there, any viewers raised on a diet of digitally captured films may struggle with the levels of film grain demonstrated. At least the filmmakers use of digital compositing manages to avoid the increased grain and drop in resolution that accompanies optical composites but Independence Day remains very much a film of its time. Having said that, its use of predominantly physical effects really pays off, with some of the model work looking particularly good.

There is plenty of detail visible in facial close-ups, whilst clothing and props also reveal a pleasing amount of clarity. The nature of the source material means that the image doesn’t quite have the sharpness of modern productions but the film retains a charm that reminds the viewer of a different style of filmmaking. The 10-bit video depth and wider colour gamut certainly help to eliminate any banding and deliver more realistic colours. The use of HDR also adds an extra element to the image, widening the dynamic range and giving many shots more definition and greater impact. There is increased clarity in the shadows and specular highlights, whilst the HDR really brings out all the tiny details in the model work. Whilst it’s fair to say that Independence Day will never look as sharp, detailed or pristine as a modern film, it’s also safe to say that it’s never looked this good either. Independence Day was originally released theatrically with Dolby Digital, DTS and SDDS soundtrack but for this Ultra HD Blu-ray release 20th Century Fox have created a new immersive audio DTS:X mix. The included Blu-ray uses the DTS-HD Master Audio 5.1-channel mix that has appeared on previous releases and whilst it’s good, it isn’t a patch on the new DTS:X soundtrack, which we reviewed using a Denon AVR-X7200WA AV Receiver with a full 7.2.4-channel setup with actual overhead speakers.

The opening credits are impressive enough with the letters exploding and rushing past you whilst the low frequency channel underscore the sound effects. Then as the mothership moves over the moon the bass energy increases even further, rattling the entire room. The sound designers take full advantage of the greater freedom afforded them by this immersive audio format and there are certain scenes that clearly lend themselves to the use of overhead channels. As the giant spaceships first arrive over the world’s cities, the sound mix channels effects to the overhead speakers to really give the impression that huge objects are moving overhead.


The new DTS:X soundtrack compliments the visuals and adds to the epic scale of the action

The added flexibility in terms of positioning effects within the sound field also adds an extra dimension to the numerous arial dogfights. The LFE channel is used just as creatively, adding plenty of bass to the battle scenes and really underpinning the famous scenes of destruction. As the aliens obliterate various US landmarks, the entire soundstage is filled with explosions in all the channels and deep bass thunders all around the sound field. However within all this chaos and destruction David Arnold’s effective score is still carefully mixed across the front soundstage and dialogue remains clear and centred. This new DTS:X mix for Independence Day is marvellous, giving a twenty year old film a new lease of life and reminding the viewer of how good an immersive audio soundtrack can be when done well.

On both the Ultra HD Blu-ray and the regular Blu-ray are the following extras:

On the second Blu-ray are the following extras, most of which have been ported over in standard definition from previous releases:

Independence Day: A Legacy Surging Forward (HD, 30:40) – This is the only new feature on this release and is retrospective documentary filmed during the making of Independence Day: Resurgence. As a result, although the majority of those involved in the first film are interviewed, Will Smith is noticeably absent.
Original Theatrical Ending (SD, 04:16) – A different spin on the ending that was used in the final film.
Gag Reel (SD, 02:05) – The usual messed up lines and mucking about.
Creating Reality (SD, 29:19) – A documentary covering the creation of the film's effects.
ID4 Invasion (SD, 21:57) – A promotional piece that was clearly created to run on TV prior to the film's release.
The Making of ID4 (SD, 28:29) – A fairly comprehensive making of documentary.
Combat Review (HD, 09:04) – A rather pointless feature that lets you play all the scenes of destruction in order or randomly.
Monitor Earth Broadcasts (SD, 51:08) – All the fake news broadcasts created for the film.
Gallery
Teaser Trailers – Teaser 1 (SD, 01:11), Teaser 2 (SD, 01:35) and Teaser 3 (SD, 02:23).
Theatrical Trailer (HD, 02:30)
TV Spots (SD, 03:57) To celebrate Independence Day's twentieth anniversary 20th Century Fox have released the film on Ultra HD Blu-ray with a transfer taken from the restored original negative and graded using HDR. The film itself remains a triumphant piece of popular entertainment that effectively combines alien invasion and disaster movie to blockbusting success. The film remains funny, exciting and cheesy in equal measure, whilst the special effects have held up well. The majority of the cast play it straight whilst Will Smith and Jeff Goldblum compete for the best lines and the only missteps are some stereotypical supporting characters. However the film remains hugely enjoyable nonsense and, by retaining a degree of internal logic, you don't question some of the more silly aspects of the plot


This is undoubtedly the best that Independence Day has ever looked

This Ultra HD Blu-ray release of Independence Day boasts a newly restored 4K transfer that has been graded with 10-bit video, a wider colour gamut and high dynamic range. The resulting image is often superb and, whilst there is a fair amount of grain, it’s likely that the film has never looked this good. The new DTS:X soundtrack is just as impressive, taking full advantage of the immersive audio format to move sounds around and over you. When you combine both the picture and the sound, you have a state-of-the-art home entertainment experience. There is only one new feature, a retrospective documentary, but all the extras from previous releases have been ported over as well. The superb picture and sound and extensive set of features make this Ultra HD Blu-ray the ideal way to celebrate the twentieth anniversary of this classic summer blockbuster.