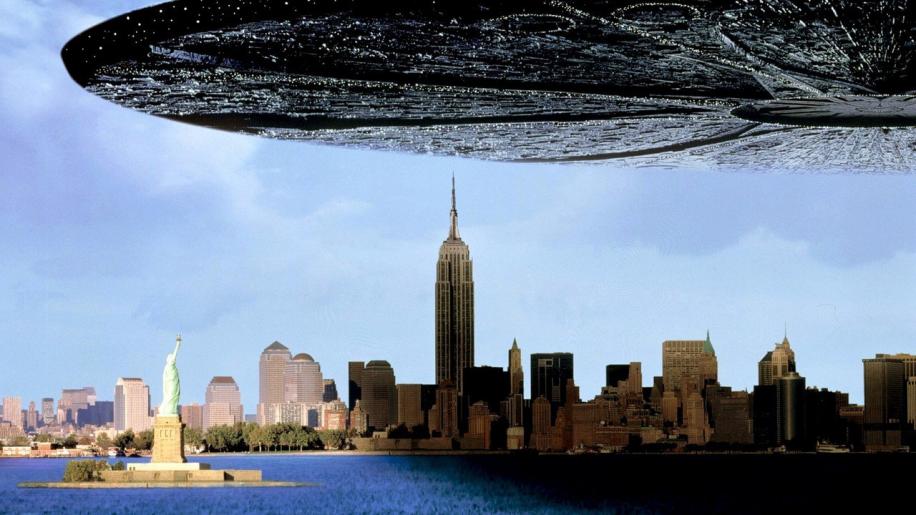 The print here is identical to the old R2 edition and the R1 Five Star Edition. The 2.35:1 anamorphic image has been well transferred with everything looking clean and clear. There are a few instances where some dirt and scratches are seen, but these are few and far between. Sharpness is good with plenty of fine detail on show and colours look well saturated with no problems present. Edge enhancement is visible in most light scenes around peoples heads and straight objects, but this is not overly intrusive and overall the print looks good for it's age.

Everyone is rushing out to buy this disc so they can hear ID4 in DTS, so what is it like? Well I will get this out of the way now; there is not a great deal of difference between the Dolby track and the DTS edition. To be honest I was hard pressed listening to a number of set pieces and quiet moments on A-B loop and flicking between the two on the fly, to hear any major differences at all. I would go as far to say if you own the already excellent R1 Five star or R2 Two disc this replaces, then keep a hold of them as they are just as good in Dolby Digital. Many of the DTS fans will be shaking their heads saying my tests are not scientific and just my opinion and they would be right, but listening at reference levels and using the best equipment I can afford which is far from budget territory I simply can't tell the two apart, sorry. If you don't own ID4 then buy this in the two for £20 offers at the moment, if you own the film already then I see no point in buying this.

Apart from a two minute Trailer for “The Day After Tomorrow” which is just a teaser type feature with nothing you can't see on the official site, the rest of the extras are identical to the previous release. You have the original theatrical ending, Trailer and TV spots, three making of documentaries and a director's commentary. A nice two disc set, but nothing that hasn't already been released.

If you are looking at this release for the DTS soundtrack only then don't bother and save your money. If you don't own the film then why not buy this edition as it is going cheap in a few sales. Overall this is just an excuse to re-release the film with exactly the same extras and tagging on the DTs track and a two minute trailer for the directors new movie.