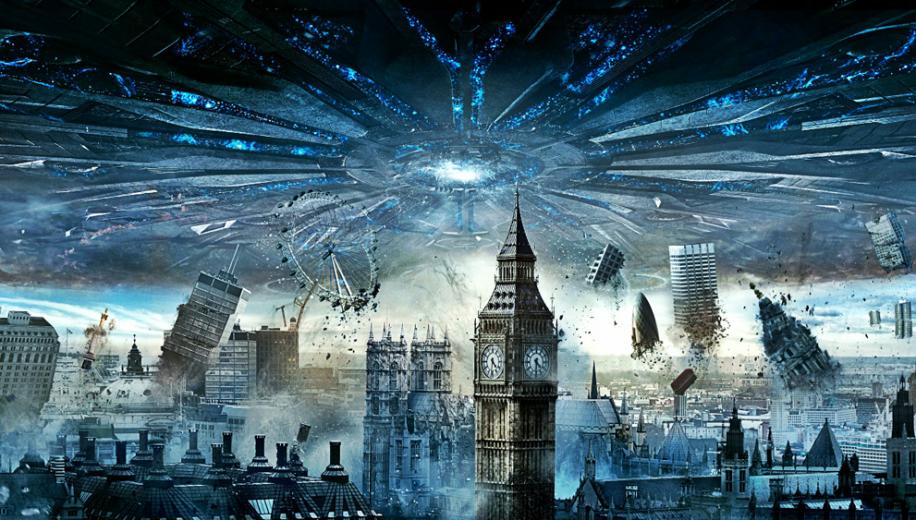 They had twenty years to prepare and this is the best they could come up with...

Whilst no one is suggesting that the original Independence Day was a classic piece of filmmaking, it was a great example of popcorn entertainment. It combined the alien invasion and disaster movie genres into a big, dumb and fun concoction topped off with a healthy amount of cheese. A likeable cast was led by Jeff Goldblum (hot off the back of Jurassic Park) and then rising star Will Smith. Goldblum is back for the sequel but the new film never really recovers from the lack of Smith's charisma and star power. Independence Day: Resurgence is essentially a 'soft reboot', that is a remake masquerading as a sequel. So too often the same set pieces and plot points are repeated in the new film... only bigger! Independence Day: Resurgence falls into the classic trap of not just repeating the previous film but doing so on a much larger scale. So the alien ship is now thousands of miles across and instead of just destroying a city the filmmakers drop Dubai on London.
Everything is done on a simply unimaginable scale and the effects dwarf the largely forgettable but game cast. Goldblum remains watchable and Brent Spiner is clearly having a ball but even replacing Will Smith with Jesse Usher and Liam Hemsworth isn't a substitute for Smith's charm. Strangely the effects are also patchy, going from excellent to decidedly ropey, especially with the extensive green screen work. All this is a shame because there are some interesting ideas in the film that either never get fully realised or are simply mentioned in passing. The constant sucking up to the Chinese market is also annoying but sadly a sign of the times. Ultimately the script feels rushed and uneven, with too many plot holes and scenes that are unintentionally funny. Independence Day was very much a product of its time and twenty years later the sequel feels like a film out of time, arriving over a decade past its sell-by date. After such a long gap the sequel had to be worth the wait and sadly it isn't. Independence Day: Resurgence was filmed digitally using Red Epic Dragon cameras at a resolution of 6K and was finished using a 4K Digital Intermediate (DI), which presumably formed the basis for this Ultra HD Blu-ray release. The film is presented at a resolution of 3840 x 2160p and in its correct 2.40:1 aspect ratio, the disc uses 10-bit video depth, a Wider Colour Gamut (WCG) and High Dynamic Range (HDR), and is encoded using the HEVC (H.265) codec. We reviewed Independence Day: Resurgence on an LG 65E6 Ultra HD 4K TV with a Panasonic DMP-UB900 Ultra HD Blu-ray player. Although this review is of the US release, the UK disc should be identical.

Since the Ultra HD Blu-ray of Independence Day: Resurgence uses a 4K DI as the basis for its HDR grade there is an definite increase in resolution when compared to the regular Blu-ray. There is more fine detail in faces and clothing and the production design and props are shown in all their glory. Where the filmmakers are shooting on actual sets or on real locations, the increased native resolution of the Ultra HD Blu-ray takes full advantage with plenty of fine detail, especially in some of the exterior shots. The effects work can also be extremely detailed with the moon base sequences, the arrival of the alien ship and the various airborne battles looking particularly impressive.

However at other times the effects work lets the side down and this is especially true with the extensive green screen work. Watching the behind-the-scenes documentary reveals just how much of the film was shot against green screen and unfortunately some of these scenes are all too apparent when watching the movie. There is a flat and contrasty look to many of them, although this is no fault of the Ultra HD Blu-ray because these scenes were just as bad at the cinema. For example, when the film cuts between actual location shots on the salt flats with their sharp depth of field and green screen work with its flat and rather soft appearance, it is often very obvious and does take you out of the sequence.

That complaint aside and, as I said, it's not a fault of the disc itself, the addition of HDR certainly adds to the experience with brighter highlights and deeper blacks. The numerous scenes that take place in space definitely benefit from the increased dynamic range, star fields pop, the white of the ships and moon base really stand out and there is plenty of shadow detail in the many dark scenes. The film's colour scheme is deliberately drab in places but remains nuanced and the wider colour gamut takes advantage of the scenes where added colour is important, such as the arrival of the alien ship. It is during this scene and the ensuing destruction that the combination of HDR and WCG really add to the image, delivering greater detail and more saturated colours. The transfer was also free of any compression artefacts and the digital source was naturally pristine in its presentation. Independence Day: Resurgence was released theatrically with a Dolby Atmos soundtrack and that has been used for the Ultra HD Blu-ray release, although the Full HD Blu-ray has a lossless DTS-HD Master Audio 7.1 soundtrack instead. Although we are reviewing the US release, the UK disc appears to be identical. We reviewed the Ultra HD Blu-ray using a Denon AVR-X7200WA AV receiver and a 7.2.4 immersive audio setup.

If ever a film was going to benefit from a Dolby Atmos soundtrack, then the planetary-wide destruction of Independence Day: Resurgence was an obvious candidate. Thankfully it doesn't disappoint, with a fantastic sound design that takes full advantage of the object-based nature of the format to deliver a totally immersive sonic experience. The front soundstage is very wide, whilst the low-end frequencies and LFE channel are unsurprisingly aggressive. The effects are steered precisely around the sound field and the mix takes full advantage of the overhead speakers to envelop you in the audio.

A particularly good example is a scene where the main characters fly through the debris field left by the destruction of the original mothership in the first film. The sounds of debris hitting the outside of the hull come from the sides, the rear and above and the hits are pleasingly solid. In addition the immersive nature of the mix is also very effective during the numerous dogfights, with fighters and spaceships flying all around the room. However within all this controlled chaos the score is perfectly integrated, whilst dialogue is clear and focused to the action on the screen. Overall this is a superb soundtrack that delivers precise fidelity and an impressive level of dynamic range, so if you're looking for a film to show-off your sound system then Independence Day: Resurgence will fit the bill.

The Ultra HD Blu-ray release of Independence Day: Resurgence comes in a two-disc set with the Full HD Blu-ray included. The Ultra HD Blu-ray is region free and although it says on the back of the box that the regular Blu-ray is locked to Region A, the disc is actually region free. Aside from the audio commentary, which is on both discs, all of the other extras are on the regular Blu-ray and although this is the US release, the UK release disc appears to be identical:

Deleted Scenes (HD, 08:24) – There is the option to watch each deleted scene with or without a commentary from director Roland Emmerich, in which he explains why it was cut. Certain scenes were cut for pacing, others because they realised in the edit that it just wasn't needed and a couple were removed in response to test screenings. The deleted scenes are : Alternate Opening, Bus Stop, White House Destruction, Charlie Asks Ren Out, Roadside Conversation, Queen's Chamber, President Lanford's Death and Catherine's Goodbye.

It's Early ABQ! (HD, 03:07) – A surprisingly funny fake interview with the characters played by Jeff Goldblum and Judd Hirsch on an early morning TV show in Albuquerque (which is actually where the film was shot).

Another Day: The Making of Independence Day: Resurgence (HD, 55:25) – This fairly comprehensive documentary covers the film's entire production and includes interviews with all the key players. As is often the case they all seem oblivious to the car crash that they're making and Will Smith's absence is never mentioned once. However the behind the scenes footage does give you an idea of just how much of the film was shot against green screen, sometimes to the detriment of the overall look. The documentary is composed of four sections and there is a 'play all' option or you can watch each section individually: A New Squadron (17:36), Earth As We Know It (17:58), The Tools of the Future (06:35) and The Invaders (13:14).

Gag Reel (HD, 06:14) – If you ever wondered how the actors managed to keep a straight face saying some of the dialogue in Independence Day: Resurgence, this gag reel proves that they didn't. There is also some great ad-libbing from Jeff Goldblum.

Audio Commentary – Director Roland Emmerich talks about the making of the film, offering up various bits of information and production anecdotes in his unusual German accent. He does provide plenty of background information about how they shot particular scenes and why but as with the production documentary, he seems oblivious to the train wreck unfolding before us. Independence Day: Resurgence attempts to follow on from the original film whilst at the same time rebooting the franchise for a new generation. Sadly it fails and although the open ending is clearly setting up a sequel, after a disappointing performance at the box office it won't get made. The film falls into the trap of repeating much of the first movie but thinking that bigger is better. It isn't and a film that actually contains some good ideas is lost in a narrative composed of plot holes, ludicrous set pieces and over-the-top destruction. The cast try hard and Jeff Goldblum is always watchable but the film desperately misses Will Smith's charm and charisma. Whatever he wanted, they should have just paid him! Ultimately Roland Emmerich and Dean Devlin had twenty years to make this film and we expected something more original.

Whilst the film itself is a missed opportunity the Ultra HD Blu-ray release largely delivers the goods with an impressive picture and a barnstorming Dolby Atmos soundtrack. The use of a 4K DI means that many of the shots in the film are bursting with detail and much of the effects work is very impressive. The use of WCG and HDR also add to the experience but the film's reliance on extensive green screen work leaves some scenes looking flat and rather fake. This isn't a fault of the disc and is just a result of decisions made in post production but it does mean the picture falls short of reference quality. There are no such caveats when it comes to the soundtrack, which is immersive and aggressive, delivering the planetary-wide destruction in demo-quality style. There's a decent set of extras that go into the making of the film in some detail whilst never mentioning the elephant in the room that is Will Smith's absence. Overall Independence Day: Resurgence is a good Ultra HD Blu-ray package that highlights many of the advantages of the new format, it's just a shame the film isn't better.