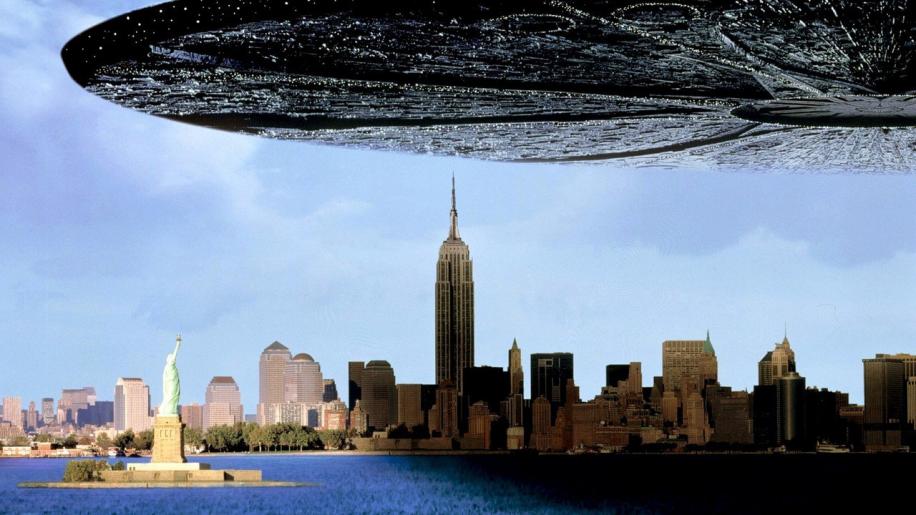 What can be said about ID4 that hasn't been said before? When this was released there was the massive hype that surrounded it, the hype that the bubble gum Sci-Fi fans had been waiting for years... War of the Worlds with tremendous special effects that just made fans gravitate towards their local cinemas. The trailers showed incredible destruction, the Empire State in all it's glory being turned to rubble, the helicopter outside the Whitehouse... did it in fact contain The President when it went west?

It's July 3rd, weekend leave has been granted to some of the air force, they're about to spend time with their family and loved ones. Unbeknown to all and sundry a massive, and I mean massive inter-stellar craft is approaching from the dark side of the moon, and it's not Pink Floyd they're playing oh no! These devilish creatures musical tastes are more aggressive with REM's It's End of the World As We Know It blaring from their supped up beat boxes. Before you know it this mother ship sends down a number of exploratory craft to Earth, each 15 miles in diameter and even still their embiotic mother dwarfs them all. And descend they do, consuming everything in their path with an ever expanding fireball. Ultimately though they come to rest above Earth's major cities, New York, Washington, London, Moscow.

Interference on cable television brings one of our heroes into the frame. TV repair man David Levinson (Jeff Goldblum) identifies a signal which the alien craft are using to communicate with each other. This signal is a countdown and it's only a matter of time before the clock hits zero. When it does however all hell breaks loose. The Empire State Building is obliterated from the top down, the White House suffers a similar fate but the President (Bill Pullman) manages to escape just in time. Not so fortunate is his wife though who on returning from a conference is caught up in the extermination these aliens are inflicting. The troops are rallied, our second hero, flight pilot Captain Steven Hiller (Will Smith) and his team are tasked with bringing down these immense floating discs of destruction. It's David and Goliath all over again, and again with history repeating itself, not only the US but also the whole world must fight for their own independence and survival.

This is about as bubble gum for the eyes as it gets really; it has to be the biggest 'B' movie budget up until that time. What we have here with ID4 is no more than an updated version of War of the Worlds, not only that but it seems to have inherited the same banal jingoism that permeated too many of the 50's Sci-Fi aliens vs. us features. If you switch off your brain a little then this can be an enjoyable ride, but once any sort of intelligence creeps in then you've lost it. The action comes thick and fast, do we wait an eternity for the aliens to appear and strut their stuff, no! They're on screen in the first 5 minutes and from there on in they don't hold back. Do we wait for them to hover over the cities wondering if they stand a chance, no! The major cities are toast within 20 minutes of the film getting off the ground. For so long in alien invading films have fans waited for the aliens to get their act together, I mean we all know that if they have the technology to hyperdrive themselves here then basically it's goodnight Vienna for the human race. At least here ID4 shows this.

That intelligence just crept in though and now you can see all the major flaws from this film. The number of coincidences must have equaled it's budget. Roger Ramjet's girlfriend just happens to survive a blaze in a tunnel that wipes out every one else; luckily she holes up in a maintenance hatch. Funny it must have had it's own air supply and cooling system. The fact that she meets the first lady then in all this destruction, over thousands of square miles then she happens to stumble into her boyfriend who just happens to have links with Area 51 where the President just happens to be holed up; it gets a little too much at times really. In the end though it means for an emotional departure as the first lady dies, unable to recover from her wounds. Those dastardly alien scum! Yes Area 51 gets a look in here as well, nothing to do with the 1947 Roswell though; oh no this is something that happened in the early 50s. Damn these aliens do go around crashing a lot on our planet.

Acting is non-existent. Goldblum does what he does best, and that's one role really, the role he found when he played The Fly quite successfully. Ever since he's played the same character time after time and it starts to wear a little thin. Pullman isn't really a commanding presence on screen, so he's not a very believable commander in chief. As for the chiefs of staff well they come right out of General Ripper's casebook from Dr Strangelove, hit first, hit hard! Everyone, including the love interests are about as cardboard cutout as you can get!

But I lock up my intelligence for a while and enjoy the ride again. Special effects when this was released were pleasant enough, the destruction scenes are a joy to behold. Not because of the number of people you can imagine wasted in such devastation but because it comes across well on the big screen, and trust me on this you want the biggest screen you can get your hands on for these shots. The dog fighting between US air force and alien craft is wonderfully choreographed with every inch of the sky ablaze with action, speed and debris. There's always something in the frame to capture your attention. External space scenes of the mother ship are standard fare for Sci-Fi but the sheer scale and enormity of the thing comes across here very well indeed.

But what lets it down above all else is it's absolute devotion to the American Flag. Ok lets face it they made the film so I guess they can do pretty much what they want to but it comes across as all very arrogant in my eyes. The underling subservient nations around the world holding their breath until the US can muster their response, and all the other nations are pure caricatures of how the Americans see the rest of us. If the lip on those British officers were any stiffer you would have sworn they must have had starch applied, what oh? But after all of this it's still a little pleasurable, if only for those damn fine destruction and actions scenes.