"You're looking at a living legend. The only active agent who ever lost a president." 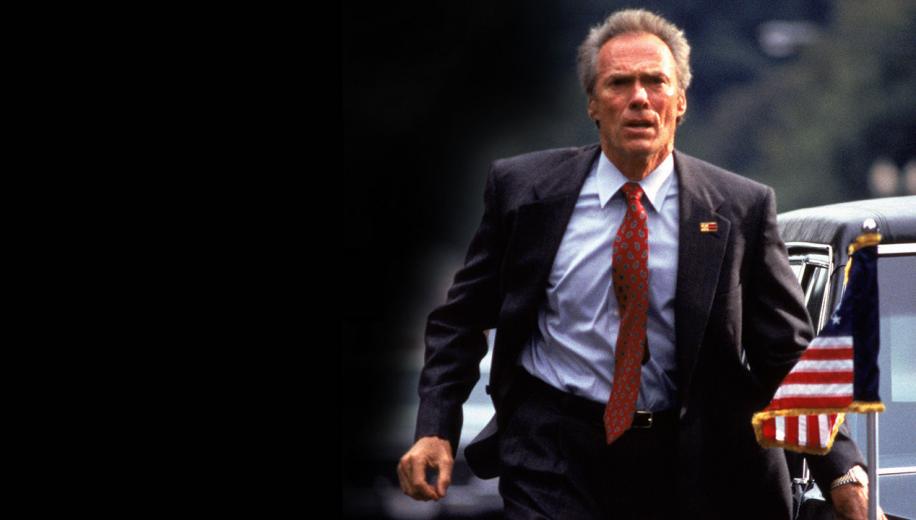 In the Line of Fire Review

Eastwood celebrated his 91st birthday this year, and with almost 70 years of acting and 50 years of directing under his belt, it's almost impossible to fault this iconic master. But everybody has their lulls - you only have to look in the direction of heavyweight greats like DeNiro and Pacino to see the truth in that - and Eastwood's came around the Eighties, where he churned out a flurry of questionable productions, including the so-bad-it's-good City Heat, the so-bad-it's-good fifth Dirty Harry outing, The Dead Pool, and the so-bad-it's-good buddy-buddy thriller The Rookie, pairing up with Charlie Sheen, to name but a few. Obviously Eastwood fans love them all - who can't really hate on Firefox? - and with veritable reason, as the man was a legend even when going up against remote control cars armed with a giant harpoon gun. But it took a whole decade for him to turn in a bona fide classic, with 1992's seminal Unforgiven perfectly closing out the chapter on the Eastwood Western, and earning him a slew of awards in the process.

He would immediately follow it up with 1993's In the Line of Fire, cementing the momentum of this kind-of comeback with a masterful thriller that both played to his age whilst also showing that he clearly still had the ability to deliver action thrills (the opening scene alone was more "Dirty Harry" than anything in The Dead Pool half a decade earlier). It would really prove the closing chapter on that era of his life too, despite questionable dabbling since (Blood Work), and what a way to go out!

... trading in Hitchcockian Vertigo vibes and clinical Day of the Jackal planning

As with Unforgiven's trifecta of Eastwood, Freeman and their nemesis, Hackman, two of the greatest elements of In the Line of Fire were its development of unlikely chemistry between Eastwood's ageing Secret Service Agent and Rene Russo's considerably younger counterpart, and his going up against the near-equal antagonist in John Malkovich's assassin, with the conversations between the two pairs - Eastwood and Russo, Eastwood and Malkovich - absolutely electric.

Sure, you could argue that Malkovich's classic crazy was cemented here (almost a prototype for Dennis Hopper's phone tennis with Keanu Reeves in Speed a year after), and he absolutely stole the show courtesy of some fabulously delivered monologues, but the flipside is the sheer charm of Eastwood willing Russo to turn and look back at him as she walks away, attempting to win her over with sheer willpower alone. The script is fantastic, as much entitled to that Oscar nod as Malkovich was his best supporting nod, whilst a superbly engaged Untouchables-esque score from Ennio Morricone offered percussion and soulfulness to add that extra depth to the proceedings. And right at the heart of it all was Eastwood, absolutely shining with star power, and embracing every flawed facet of his character whilst also revelling in his now-trademark utter defiance of all things new - he was clearly determined to do things his way, and exit the thriller genre on his terms, no matter what audience expectations were demanding by that point. As such, In the Line of Fire has all the feels of a timeless classic, trading in Hitchcockian Vertigo vibes and clinical Day of the Jackal planning, and ratcheting up the tension to an unbearable degree, favouring brains over blockbuster bombast, and remaining an absolute high in his late acting career resurgence.

In the Line of Fire 4K Video

... it looks absolutely spectacular, frequently near perfect, and as good as - if not likely better than - it has ever looked before

It's hard to fully appreciate just how much of an improvement this 4K presentation is without remembering some of the earlier Blu-ray - and before - releases for this feature. It was always soft, DNR'd to all kinds of hell, just washed out, murky and... unimpressive. Sure, the film itself transcended all of that, and watching it on a smaller TV would have made it harder to notice, but now, revisiting it in native 4K, it looks absolutely spectacular, frequently near perfect, and as good as - if not likely better than - it has ever looked before. Skin textures, lines, pores, that shimmer of sweat, wisps of hair, clothing weaves, and the often lavish and also often distinctly 90s backdrops, all look fabulous. The polished wood tables they sit around simply pop with finer observations, and there's a glorious amount of nuance and texture to what is a frankly frequently very dark image (hell, what else would you expect from an Eastwood movie, even without him behind the camera).

WCG and HDR help give it a new lease of life too, enjoying the brown-dominated colour scheme, making skin tones healthier and giving some interesting pop and nuance to the tones on offer - there's a scene where Malkovich and Eastwood go a couple of rounds over the phone, where Malkovich's dark apartment has a half-raised blind that boasts some golden orange tones, with the latter half of the window a gorgeous blue, and even Malkovich, bathed in shadows himself, still clearly has colour defined on his clothing. There are some wonderful tones, a stunning orange sunset view of the Capitol, and deep and rich inky black tones which are utterly bottomless. The neon street lights and brake lights absolutely pop during the night time sequences and nobody could have possibly expected anything better than this fabulous 4K rendition.

In the Line of Fire 4K Audio

In the Line of Fire's 4K Blu-ray release enjoys a healthy, faithfully organic but often surprisingly sweeping Dolby Atmos upgrade, with the High Definition 3D Object-based immersive audio track lapping up Ennio Morricone's fabulous score (reminiscent of his work on The Untouchables) and delivering it alone with some surround breadth and LFE weight, whilst the effects enjoy a few sporadic, and largely book-ended, thunderous gunshots.

Dialogue remains firmly prioritised throughout, dominating the frontal array, and effects enjoy the larger gatherings on the President's eventful trip across the country, with aircraft noises overwhelming your living room, gala gatherings bursting into your environment, and subtler noises - that telltale siren early on in the piece - keenly translated across the array. Obviously the main LFE effects usage comes in the form of the gunshots, but really that's nothing in comparison to Morricone's fantastic, memorable score, which also has some wonderful LFE-draped percussion that really comes across fabulously well and gives the whole track added weight. Much like the video, the film has simply never sounded this good.

In the Line of Fire 4K Extras

Sony's UK 4K release of In the Line of Fire delivers a comprehensive selection of extra features which are graciously all ported over to the 4K disc itself.

... a comprehensive selection of extra features

Headlined by an Audio Commentary from Director Wolfgang Petersen, we also get a handful of watchable Deleted Scenes and a quartet of solid if marginally EPK-esque Featurettes breaking down key aspects of the production, with the set rounded out by a trailer.

In the Line of Fire 4K Verdict

In the Line of Fire perfectly book-ended Eastwood's 'cop' thriller run almost as impressively as Unforgiven closed out the chapter on the Eastwood Western a year earlier, giving him the kind of closure that The Dead Pool could never achieve (there's a lot of Dirty Harry in his role here). Das Boot's Petersen was at the height of his Hollywood game, Morricone supplied the tremendous score, and the cast - including an electric Malkovich and superb chemistry from Russo - just completed the perfect storm of ingredients. Eastwood's had memorable moments in front of the camera since, but 1992 and 1993 were, for him, the equivalent of De Niro's 1995 (Heat and Casino) or even Pacino's 1993-1995 (Heat and Carlito's Way). A late era classic from an absolute legend.

A late era classic from an absolute legend

Sony's UK 4K release of In the Line of Fire delivers a gorgeous native 4K restoration and a superb Dolby Atmos upgrade for the audio, as well as a very good set of extra features ported over to the 4K disc proper. It's a must-have release.

In the Line of Fire is released by Sony Pictures Home Entertainment UK and available on 4K Ultra HD Blu-ray™ from June 14th.