In The House Blu-ray Review

So why should you see this movie? 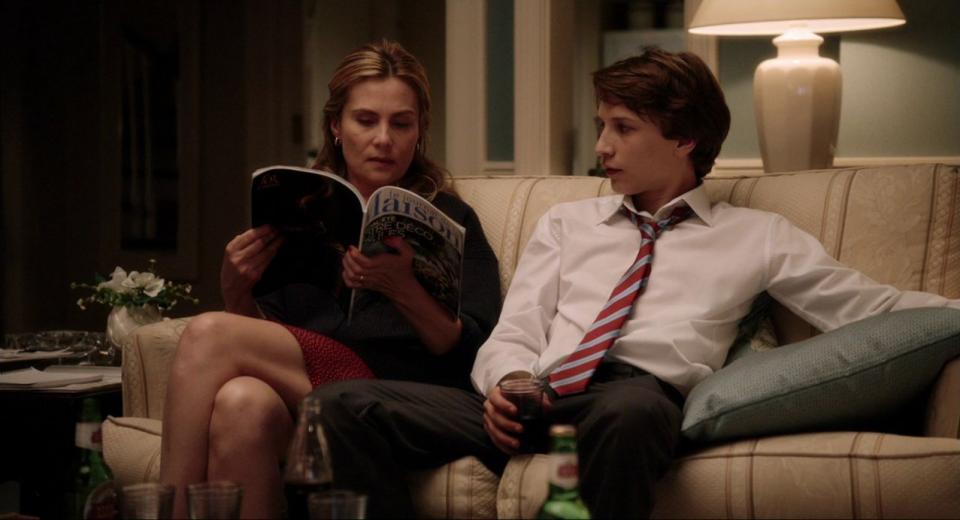 In The House is delivered as an impressive 1.85:1 AVC encoded transfer.

The subtitles are in white with a clear and simple font. I didn't experience any issues with white on white and never found myself unable to read the text, which is very well translated.

What struck me first was it's natural colour palette. Skin tones are accurate and although the image has been slightly oversaturated in places, colours certainly pop off the screen at you. Blacks feel deep and rich, and display no signs of crushing or artifacting. Shadow detail, however is ever so slightly under-par - in part due to the grain structure in the image. This doesn't take anything away from the picture in my view, but some who prefer the more modern, grain-less image, might find reason to gripe when they realise they can't see exactly what books are on the shelf in a room or the individual folds in a school uniform blazer.

Another thing that the noise levels mask a little is overall sharpness. Outlines are strong and defined, but it's the fine object detail that the grain sometimes gets in the way of. Again, this is not one of those movies that I felt this lack of an ultra sharp image had a detrimental effect on. For me, it didn't feel lacking in any department really.

Contrast is excellent, and lighting is natural, and the post production has been handled delicately. Photography is very smart and has a typically French style to it with longer lingering shots slowly zooming in, and extended close ups of the characters in particularly poignant situations.

On the whole, it's a pretty good looking Blu-ray. It's the kind of movie that will always look great against other movies in a similar genre. The audio presentation delivered with In The House comes in a doubly competent LPCM Stereo and DTS-HD MA 5.1 audio tracks.
Not a challenging movie as far as the sound mix goes, but it's classy nonetheless. Sound design is kept simple and doesn't overstretch itself at all. Dialogue is always clear and crisp, and with the DTS-HD MA surround mix, occupies the centre channel only most of the time. It's a very traditional mix, and it doesn't get anything wrong. Ambiences adds depth to the scene, and these are the only real elements that ever venture as far as your surrounds. Dialogue is King in this flick, and it's treated as such, with sound design only ever playing a supporting role.

As for the music, it's sparsely spotted throughout the movie, but when it's there, it's delicately mixed and never wades in too heavy or too light. It's a great balance.

It's a decent audio presentation, and it shows confidence with high frequencies in both surround and stereo. I don't think my sub got a look in, but in truth, I didn't miss it but for the odd thunder roll in the background. Solid. A fair offering in terms of additional content with this disk, though some of it is entirely questionable as to whether it should be here or not. A 50/50 in decent content and total filler.

Costume and Lighting tests
A little weird if you ask me, but it;'s a series of self explanatory costume and lighting tests with the cast. No dialogue, just music, and at almost 3 minutes long, I did wonder why I was watching this at all. Maybe some will enjoy it. Nice opportunirty for the music to shine though

Bloopers
10 minutes of actor error and guffawing in French. Sadly, I couldn't quite get into this, language barrier seems to remove a lot of the natural humour. It seemed more like a reel of mistakes than bloopers.

Premier at Grand Rex
When In The House premiered at the Grand Rex, it was to an audience of 2,500 teachers. This is an interesting 6 minute fly-on-the-wall look at the premier. No narration required, just a simple "watch what happened".

Poster Concepts
A minute and a half of posters for the movie. Some of them look excellent actually. Not sure I would normally recommend a feature like this to be honest, and although it does feel a lot like filler, it actually have some interesting images on show.

Deleted Scenes
I'm sorry, but I have to have a little rant at this. The Deleted Scenes feature opens with a word or two scribed by Director François Ozon in which he explains that the following were scenes that were deleted because they "slowed down the pace" of the movie and got in the way of the movies intention to fire the imagination. Ok, fine. So why are they even on this disc then? I don't know about you, but the only time I ever see a need for a "Deleted Scenes" feature is when the Director has additional stuff he wanted to show his audience but couldn't, for whatever reason, justify their existence in the original cut. I don't want your unwanted off-cuts, but if you're going to give them to me anyway, please don't start out by telling me how much you thought they detracted from the movie.

Making of
A really interesting feature on the making of. It features screen tests, a lot of which are not in HD I might add, but there's a lot of extremely good stuff here. If you watch anything on the extras, watch this. Tantalisingly playful yet morally precarious, François Ozon's well crafted tale, In The House (Dans Le Maison) delivers an unashamedly voyeuristic perspective on creative writing that holds more intrigue from the get-go than you could shake a well educated stick at. Laced with intrigue; peppered with narrative counterpoint, and awash with rich and interesting characters playing out a story that I, for one, found unique and captivating. A modern classic that requires only time in order to become a staple "go-to" foreign language movie. Well worth your time.

As far as the package goes, it's very strong out of the paddock with a great picture and sound presentation, but it begins to flap a little in terms of the additional content. there's plenty there, but it might get your back up that some of it probably doesn't belong there in the first place. Overall, this is definitely a recommended disc, if only for the feature itself and the extended "Making of" documentary.
The disk referenced in this review was a complete check disc and included no packaging.